“The creative process of innovation.” What does a sentence like this say? What is the creative process? Genuinely interested, I quizzed people I heard talking about it. It implies a sort of certainty about creativity that I lack myself and would love to find.

The Art of Thought 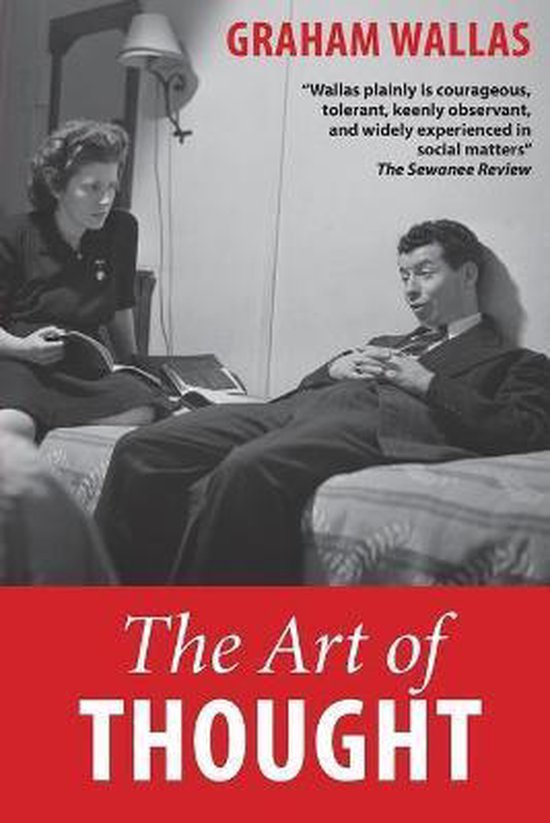 His book, The Art of Thought, was published in 1926. Graham Wallas wrote a book on The Art of Thought for young people to help them become better thinkers. Wallas devotes only one of his twelve chapters to the four ‘Stages of Control’ in the thought process. The word ‘creative’ is only mentioned four times in the book. Despite this, many creativity researchers see these four Stages of Control as the first step-by-step description of the creative process.

The Stages of Control
Stage 1: preparation.
During the preparation stage you consciously work on a problem.
Stage 2: incubation
There comes a moment when you are working on a problem that you just don’t know what to do anymore. You are stuck in your head, figuratively speaking … duh.
How do you get unstuck?
Incubation
Incubation is a stage that takes place in the unconscious mind. According to Wallas, this phase is associative in nature. The incubation phenomenon has been studied by many creativity researchers. It is rather difficult to study, because yes, it happens unconsciously. However, the advent of neuroscience does provide some interesting leads. For example, we know the principle of “the best ideas come when we are under the shower” and there is a reason for that. When we perform a low-cognitive task (think of taking a shower, doing laundry, walking, etc.) then the brain activity of the part of the brain where we make judgments is also less engaged. This creates more room for activity in the other parts of our brain. We literally make more neural connections, which increases the likelihood of gaining new insights.
Stage 3: Illumination
He describes Illumination as a moment of insight, not a stage. Wallas does write about the period just before the moment of illumination. Although he does not refer to it as a separate stage, there is another step between incubation and illumination: intimation. Better known to ordinary people as ‘the tip of your tongue feeling’.
Stage 4: Verification
Verification is a stage wherein the thinker verifies that the moment of insight was actually the missing piece of the puzzle for solving the problem.
In order to arrive at these four stages, Wallas draws inspiration from Von Helmholtz (1821-1894), a German physician and physicist. He justifies these with examples from the diaries of Varendonck and Poincaré. Not an empirical justification, but more of a philosophical one instead.

I thought the book was fantastic. Wallas also writes in a marvelously visionary and poetic way about education. Yet these four stages provide the same answer that I already understood:
The creative process of innovation alludes to the process of coming up with an idea. But not to the actualization of that idea, of bringing it into reality.
Anyone who is involved in innovation knows the pain and effort that goes into realizing an idea. If realizing an idea is not a creative process, I’ll eat my hat.

The Stages of Control that Wallas describes can also be applied to the realization phase. Preparation is an analysis phase. Getting the facts right. The list of criteria for realizing the idea, or the requirements and preferences.

The period from incubation to illumination is a phase of seeking out options and coming up with ideas. How are we going to develop this idea? What is the following number one step?

Verification is the testing phase for ideas. Wallas’s great source of inspiration Henri Poincaré could immediately sense whether an idea was good or not. But of course, we are not all mathematicians and great philosophers.

When we are faced with innovating in complex situations, we tend to go for testing out the idea with a prototype. A test on the material reality. We analyze that test. With the findings, we take the next step towards realizing an idea. We start coming up with new ideas and testing them all over again and again. We keep on analyzing, coming up with ideas and testing. We repeat these steps until we feel that the idea has been accomplished. We call innovating an iterative process for a reason.

This way, we can say that the Stages of Control forms the basis for every design, innovation, and creativity process. If you zoom in, every creative process is unlike any other. But when you zoom out, it is always the same. That means that the creative process was formalized 95 years ago and still exists today. Time for a party in five years’ time!

In a weekly column, alternately written by Eveline van Zeeland, Eugene Franken, Helen Kardan, Katleen Gabriels, Carina Weijma, Bernd Maier-Leppla, Colinda de Beer and Willemijn Brouwer , Innovation Origins tries to find out what the future will look like. These columnists, occasionally supplemented by guest bloggers, are all working on solutions in their own way on the problems of our time. So that tomorrow will be good. Here are all the previous articles.

Willemijn Brouwer's mission is to unmask all facets of creativity and design. She writes with the credo: who wants to design the future must know the history. Willemijn works as a lecturer at TU Delft and as an independent trainer/consultant.