In a weekly column, alternately written by Lucien Engelen, Mary Fiers, Maarten Steinbuch, Carlo van de Weijer, Tessie Hartjes, and Auke Hoekstra, Innovation Origins tries to find out what the future will look like. All six contributors – sometimes accompanied by guest bloggers – are working on solving the problems of our time. Everything to make Tomorrow Good. This Sunday, it‘s Mary Fiers’ turn, about Brabant breeding ground. Here are all the previously published columns.

All the positive economic news about our province is regularly referred to as the good breeding ground in Brabant. In other words: good soil. Cycling and walking through the beautiful Brabant landscape you wouldn’t say it at first glance, but our soil is in a very bad state. Not only in Brabant, by the way.

Soil depletion
Globally, the quality of the soil is deteriorating at a rapid pace. All over the world, many farmlands are in serious decline or are already so bad that nothing is growing there anymore. The picture below clearly shows the dramatic state of the soil all over the world. From Brabant to agricultural areas in Africa, agricultural entrepreneurs are faced with atomization, leaching, and landslides due to intensive food production using fertilizers, pesticides, monocultures and heavy agricultural machinery. But it is not just a problem far away. Under our own feet, too, the quality of the soil is deteriorating. The cause is simple: we take more of the soil than it can give us. 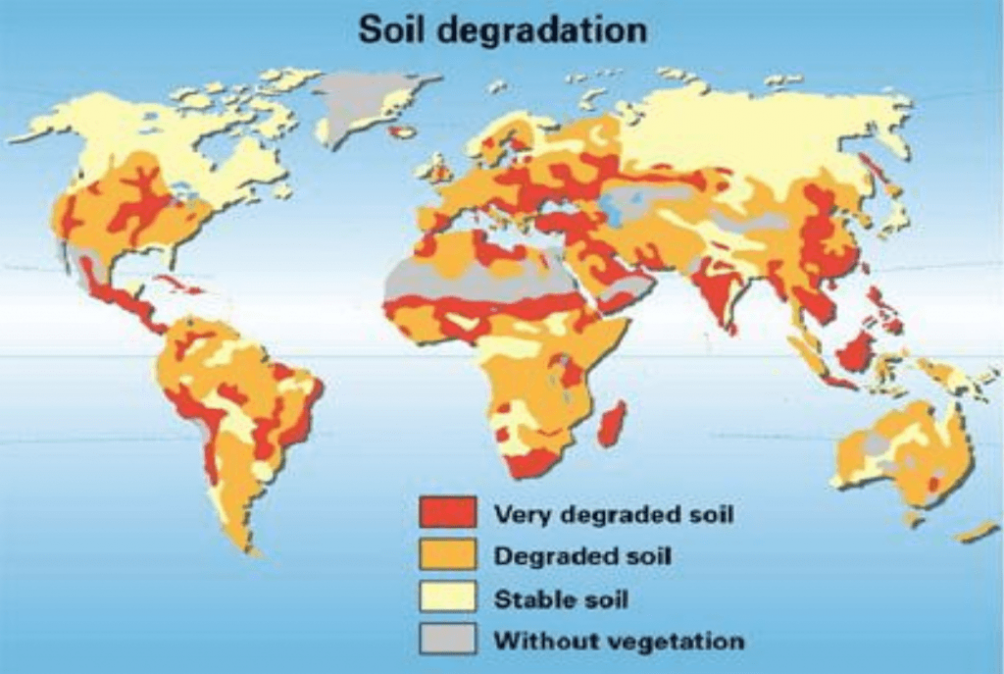 So what?
“So what”, you might think. What is the problem? That is actually very simple. Everything that lives on land depends on the soil. We, as people, too. For food and drinking water we are dependent on the soil. So the soil really is something to cherish.

However, the problem of soil depletion is not yet widely recognized. It doesn’t concern us on a daily basis. In view of the seriousness and scale of the problem, this is actually quite strange. Is it perhaps because we have never had as much food as we do today? At the same time, the soil has never been so exhausted. But the problem is not yet noticeable, at least not in an urgent way.

This ‘race to the bottom’ is determined by two mechanisms. On the one hand, food prices are being squeezed down, partly as a result of supermarket wars. Good for the consumer, but disastrous for the farmers. After all, they are getting less and less paid for their products. The dogma is cheaper, cheaper and even cheaper. On the other hand, land prices have been rising for years. This was partly due to speculation on land and market demand for land. Landowners can achieve good returns. At the moment, land makes a better profit than money in the bank. So why not?

In summary, higher costs and lower yields for farmers. In order to keep going, many farmers are forced to use the soil in a super-efficient way, i.e. intensively and unilaterally. And that’s exactly the recipe for exhausting the soil. A short-term strategy, but unfortunately often applied.

Landowners have the key
So landowners have an important key in their hands. Landowners come in all shapes and sizes. Not unimportant: the government is also a huge landowner. One-third of the land in the Netherlands is owned by municipalities, central government, water boards or provinces.

It should be possible to form a collective of landowners that wishes to lease out land without profit, or with a modest return for a fair price? Of course, it is up to the farmer to establish the fertility and biodiversity of the soil so that food can be produced from generation to generation. How simple can it be? So please, let’s not trade endlessly with land and drive up the prices. Interested? Then come to this meeting. Who knows, the first step will be taken there, on the way back to a good breeding ground in Brabant. Who’s joining?

Talent and innovative power make Brabant's IT and data…
You shouldn't just ask for a grower, but just give Bart a…
Leonardo da Vinci's To Do List
The value of a good brainstorm and how to make it work next…
What is the ‘box’ when it comes to thinking 'outside the…
The nitrogen debate shows it again: collective amnesia…