People from many different countries live, study and work in Eindhoven. Every week, Innovation Origins has a talk with an international about what brought them here and what life is like in Eindhoven..

You would think with all these internationals living in Eindhoven, we would have no issue finding candidates for this interview series. You are correct! Some phone calls, e-mails and WhatsApp messages to our network of professionals and internationals, always results in contact with lots of international people with a good story. When we contacted graphic design studio George&Harrison, they told us Valentine was part of their team now and that she wanted to join series. We meet her at the studio. “I started here in January as an intern and three weeks ago I started with my position as a digital designer. I’m really happy about that. After my internship of six months, the guys offered me a job. I had to go back to France to finish my masters in multimedia and graphic design and as soon as I graduated I came back to Eindhoven.”

“Three years ago I was in the Netherlands for the first time. I visited Amsterdam. When I was there I noticed that graphic design really part of Dutch life. I saw a lot of well-designed posters, for instance. You see it much more here than in Strasbourg, where I’m from. That is how I came up with the idea to do an internship in the Netherlands. When I was looking for a design studio, I came across George&Harrison. I didn’t know anything about Eindhoven tough, I knew PSV, but that was about it. We did my interview over Skype and I arrived one week before my internship started. Luckily the team helped me to find a living space. I found a nice room in a student house. I lived there with other international students. It’s quite difficult to find a nice house because a lot of student houses advertise with ‘Dutch only’. When I came back a few weeks ago I needed a house and I needed to register in the city. I needed an address to register, but I didn’t have a house yet. That was quite difficult. I now live five minutes from the studio.” 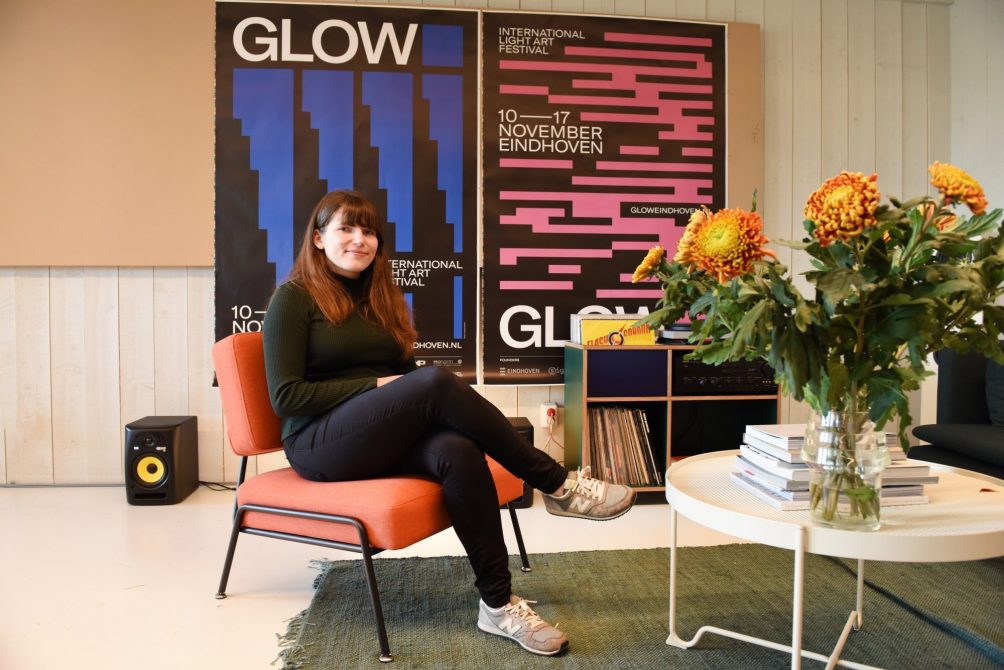 Living close to the studio means Valentine also lives close to her favourite spot in Eindhoven: Strijp S. “I really love it there. I like to go to art space MU, the Ketelhuis is always good, the skate park is also awesome to visit. I also went to two beer festivals on Strijp S, I love a good beer tasting. That´s why I also like the Stadsbrouwerij (brewpub). I explored the city by taking my bike and just followed the cycling paths. No destination, I just went. That’s how I discovered the beautiful Genneper Parken. I would love to have more water in the city centre. Of course, there are places, like the terrace of the Van Abbemuseum, where you can sit along water or the  Dommel river, but it is not a common thing in Eindhoven to do that.”

Being an intern or an employee feels different according to Valentine. “When I first came here, it was my first time away from my parents’ home. I knew it was for six months and eventually I would return to France. This time, moving to Eindhoven is more permanent. My life is here now. I have my own home, without roommates, have a steady job and I joined an all Dutch soccer team. They make an effort to translate stuff for me and on the field soccer is soccer no matter the language. I feel so lucky. I had such a good start here, partly thanks to the team of the studio. They helped me a lot, were patient when I had difficulties with the English language. But also I also love the projects I get to work on. Thanks to the projects I also got to know Eindhoven a bit better. I didn’t know Eindhoven is such an international city, but I’m happy it is. I feel comfortable here.”

The Digital Shiftings in Sino-Dutch Business Communication
Share audio memes with Voicy: 'We're building a kind of…
Everything that can affect a plant
The Space Week shows the social importance of space for…
Making personal choices based on good information
A minimalistic phone case with maximum protection
Manage Cookie Consent
We use cookies to optimize our website and our service. Help us to make our site better by accepting all cookies.
Manage options Manage services Manage vendors Read more about these purposes
View preferences
{title} {title} {title}