The Importance of actively searching for the limits of our progress
In a weekly column, alternately written by Lucien Engelen, Mary Fiers, Maarten Steinbuch, Carlo van de Weijer, and Tessie Hartjes, E52 tries to find out what the future will look like. All five contributors – sometimes accompanied by guest bloggers – are working on solving the problems of our time. Everything to make Tomorrow Good. This Sunday, it‘s Mary Fiers’s turn. Here are all the previously published columns.

A human being can come up with and actually make many new things. Especially in our region! Slowly but surely, this idea of social engineering creeps into our minds. I notice it around me. Endless trust in human and technical solutions. Sometimes even nature seems to be completely feasible. But is that true? And should we want that? What problems are we actually trying to solve? Are we blind to the disadvantages of (technological) innovations? Or do we also have a clever answer to the disadvantages? These questions deserve a structural answer. It’s time for a natural balance between opportunities and borders.

Since I have been paying attention to it, I have seen all kinds of examples come across. I’ll present you three straightforward examples from the media from recent weeks, in which people try to control nature. Not specifically for our region, but these natural examples are recognisable to everyone and show the absurdity of what we are sometimes dealing with.

Fear is a bad counselor. We know it, but our fears often take control of us. This is also true of our fear of bacteria. Bacteria are apparently extremely scary. There appear to be millions in your home. Without you seeing them. How scary is that? And you might become ill as well. There is even an official name for it: bacteriophobia. Not to mention the fear of smudge. A number of producers of detergents thought about a solution for this: hey, let’s just add some disinfectants. Consumer happiness by killing all bacteria. Given the number of advertisements that respond to our fear of bacteria, this is a great commercial success. But who tells us that it is actually good to allow some dirt into your home? Recently, a major British study was published showing that the fight against the bacteria is counterproductive to our health. What’s next? ‘Health’ drinks that kill the bacteria in our intestines? More pills for our pets, so they carry fewer bacteria with them?

Do you remember the storm a few weeks ago? Code Red was given and staying inside was the advice. The day after the storm, an article appeared in the Eindhovens Dagblad in which an answer was sought to the question “whether the storm damage is due to the policy of the municipality”. According to the interviewee, the municipality should have prevented storm damage by improving maintenance. Yeah, really dangerous, all those trees. Preventive cutting, then? Or from now on, driven by fear, keep the branches nice and short? Much less risk and also less nuisance from all those leaves. There is still something to be solved with oxygen, but who knows we can tackle this problem with a sort of ‘air vacuum cleaner’ like the one currently found on the Stadhuisplein in Eindhoven?

Another example. Outbreaks of African swine fever have occurred in Poland and the Czech Republic. This leads to unrest among pig farmers in Germany and the Netherlands. Understandably, because an outbreak is disastrous for the animals and the entrepreneurs. The German Farmers’ Association, therefore, pleads for the massive shooting of wild boar. The preventive killing of wild animals. Again, what’s next? Shoot all wild birds flying over, because they may carry the avian influenza virus with them? It really raises the question: what is actually the problem: the wild birds or the way in which we ‘produce’ chicken?

Just a few examples show that our natural world is considered more and more makeable. This is also the case with smart inventions in this region. For every (supposed) problem or risk that occurs, a ‘solution’ is devised. And then, afterward, we will have to solve the problems caused by this solution. Or not. But do we still have an idea of whether we are doing the right things? How do we ensure that we have and keep that sight? This requires the conscious exploration of boundaries; as a kind of counterweight to the unlimited (technical) possibilities.

If Brainport really is a smart region, we should be at the forefront of smart thinking about the borders of our developments. And with that, I do not mean the technical limits, but natural and ethical limits. Especially in our region of technological miracles. I, therefore, call for an authoritative border committee. This committee puts border issues on the agenda. Not to stop ‘progress’, but to explore borders by means of a serious public debate.

Especially in this smart region, we must be able to work together, as Einstein put it, to show the difference between stupid and ingenious. How? By actively searching for the limits of our progress. Only stupidity knows no limits. 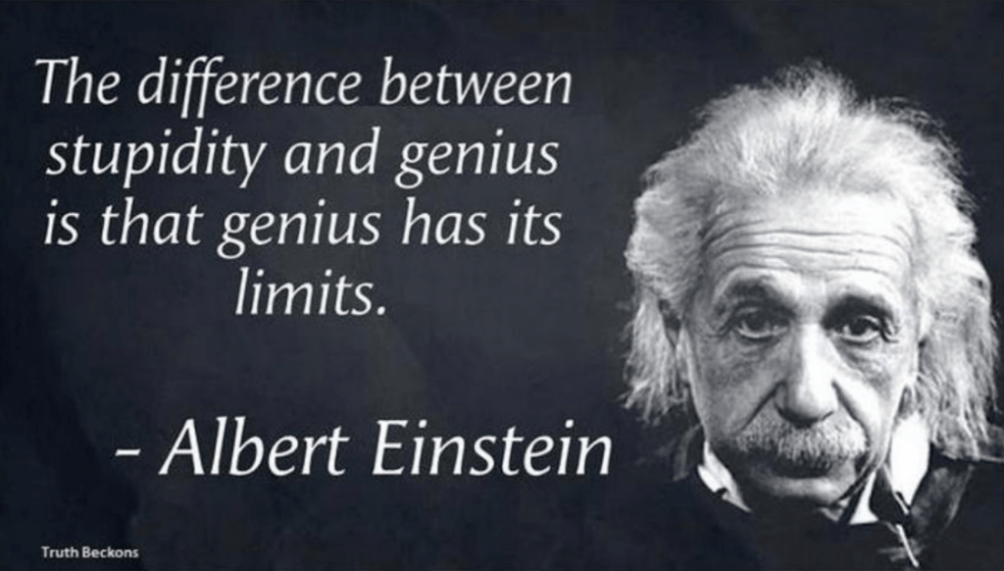 Between hope and possibility
What is the ‘box’ when it comes to thinking 'outside the…
The seven patterns of AI - from technology to application
The value of a good brainstorm and how to make it work next…
You shouldn't just ask for a grower, but just give Bart a…
Committing to village lifestyles and community-minded green…