There is only one means of transport more popular in the Netherlands than the car: our faithful steel steed with pedals. Together we cycle some 15 billion kilometers a year in The Netherlands. That’s more than 880 kilometres per person. If we are cycling these great distances, why not do something useful with all those trips? That’s what the inventors of the ‘Snuffelfiets’ (‘browsing cyclists’, ed.) must have been thinking.

The companies Civity and Sodaq set up the project together with the National Institute for Public Health and the Environment (RIVM) and the province of Utrecht. Civity specialises in data solutions and Sodaq is an expert in the field of sensors. Lastly, RIVM takes care of the validation of the data that is collected by the Snuffelfietsers.

And this data, well, that could be anything. “There are several sensors in the device, such as humidity and temperature sensors,” Claar Schouwenaar explains. Schouwenaar works for the province of Utrecht and is the project leader for the Snuffelfiets. “These sensors can tell us something about heat islands, for example.”

A heat island effect is a phenomenon whereby the temperature in urban areas is relatively high compared to surrounding rural areas. “Measurements show that the city can be up to eight degrees warmer than the countryside”, meteorologist Gert-Jan Steenveld of Wageningen University recently explained in the university magazine Resource. “But even in a city this can vary considerably from one street to the next.” Measurements from the Snuffelfietsen could therefore identify local heat islands. These could be addressed with more vegetation, for instance.

But that’s not all. “An accelerometer and a vibration meter are also included. These collect data on road surface quality,” says Schouwenaar. “So if you hit potholes or tree roots, it detects that.” This could help municipalities and road authorities in future to analyze and maintain cycle paths and other roads used by bikes. “And last but not least, sensors that are used to measure air quality, of course.”

Units handed out to 500 Snuffelaars

Meanwhile ‘Snuffelaars’ (‘browsers’, ed.) are riding around in the municipalities of Zeist, Amersfoort, Utrecht, Nieuwegein and IJsselstein. “But North Holland, South Holland and Overijssel are also interested in the project,” says Schouwenaar. “And a pilot with 50 bicycles has just been launched in Gelderland too.” 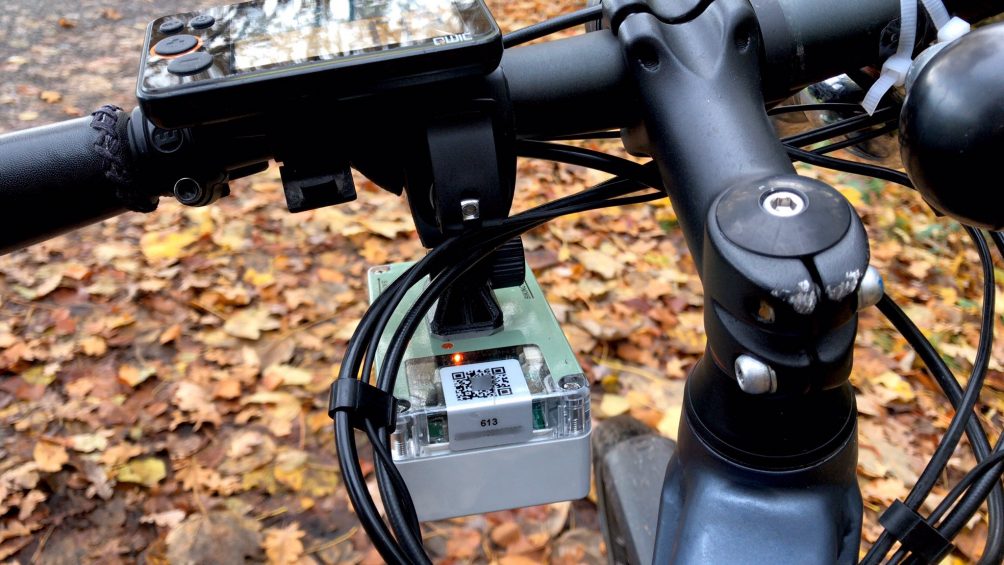 The remaining devices were distributed last month. There are 550 units in total, 500 in the province of Utrecht and 50 in Gelderland. The project started a year ago as a small pilot with 10 bicycles in Zeist. Pretty soon there was a lot of enthusiasm for expanding the project. ” We then said: we are going to scale that up to 500 participants,” Schouwenaar says. “Although we’ll spread it across the entire region.”

The ultimate goal is a two-fold one, according to Schouwenaar: “On the one hand, it’s an experiment to see what we can do with the collected data. You don’t want to immediately invest a lot of money into something that might not produce the best results. But at the same time you could say that it’s also an attempt to work towards the creation of big data, which does involve a lot of people who take measurements.” After all, the more Snuffelfietsen there are riding around, the more valuable the data becomes. “Because then you will be able to determine an average from it,” Schouwenaar states. And the more data input, the more accurate the output will be.

Schouwenaar is therefore hoping that ultimately as many municipalities and provinces as possible will want to participate. “Anyone with their own specific question or method would also be fine,” she says. “It’s a way of demonstrating that very cheap sensors provide relevant data as well, as long as you have enough of them.”

The data platform developed by Civity makes it possible to monitor measurements from the project on a daily basis. Participants can also view their own measurement results via an app. The image below depicts the data from all Snuffelfietsen in the Utrecht area on November 20th. Aside from this grid map, all the specific routes of that day can also be viewed in detail. 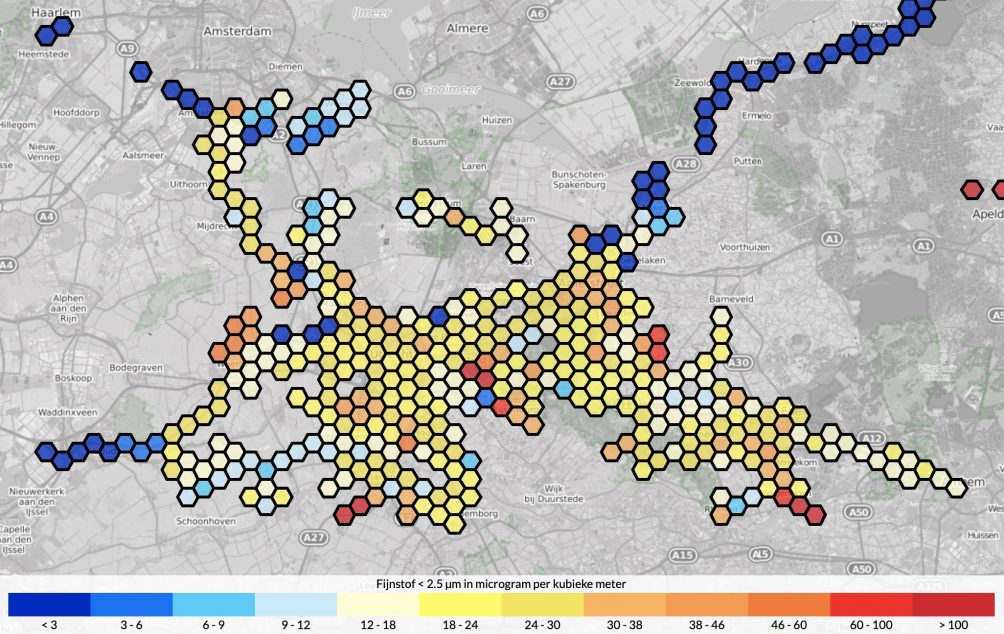 So it seems that there are a lot of fine particles in the air. However, there are often days when most of the routes on the map turned out to be relatively blue too. “Yes, that’s also disappointing for lots of participants”, Schouwenaar responds. “They thought: now I’m going to show you for once and all just how disgusting the air is in my neighbourhood”, she laughs. “But it’ s not so bad after all. That’s why it’s nice that the RIVM is on board with the project. They ‘clean’ the data by correcting any anomalies with the help of their measuring stations”, Schouwenaar explains. “The RIVM also says that levels of fine particles in The Netherlands are on the whole quite okay. Therefore you will see a lot of blue routes on a regular basis.”

Nevertheless, this data is also valuable. And in any case, there are plenty of ideas to further innovate the project in the future. “We want to continue developing the device. If you really want to be able to say something about air quality in our country, it should also include a nitrogen sensor.”

And it could be made even smaller, so that the new version could be used by new groups of Snuffelfietsers. “Imagine, for example, cyclists who cycle other routes with a smaller device or perhaps a unit that’s even fully integrated into the bike frame. Or all the bicycle couriers in The Netherlands start using them”, Schouwenaar suggests. “Or – and this is really a very relevant option – working with shared bicycles, such as the OV-fiets (rental bike from the Dutch public transport provider).”

And that calls for improvements to be made to the measurement equipment. ” At present, the unit is linked to the user, who also looks after it,” says Schouwenaar. “Where shared bikes are concerned, the device should be vandal-proof.” Nevertheless, that type of an upgrade would immediately lead to a huge increase in data, which makes it an appealing option. “At the moment we are also working with the OV-fiets to see if this is feasible,” Schouwenaar concludes enthusiastically.

Millions of Snuffelaars who constantly analyze and improve the quality of our home environment with each bike ride to work or to the supermarket. In a few years’ time, that might just become a reality.

Digital Roadlab enables precise condition assessment of…
'Eight PET bottles go in every cycling jersey'
Classified raises the bar again with their innovative gear…
'Universities should build a Silicon Valley around…
Improving urban cycling mobility
Corona in Europe - Why is the Netherlands in lockdown?