While not so long ago an international team of scientists led by the German Aerospace Center (DLR) committed a dramatic development at the Thwaites Glacier in the West Antarctic region, the following alarming publication is now emerging. This is from Dr. Martin Rückamp’s Alfred Wegener Institute (AWI): at the Petermann Glacier in northwest Greenland, a huge iceberg is breaking down within a short period of time. The Hindu Kush was also in the news last week with the announcement of the International Centre for Integrated Mountain Development (ICIMOD): at least one-third of the Hindu Kush and Himalayan glaciers will have disappeared by the end of this century. Another German-led research team is currently on an expedition to the Iceberg A68 on the Larson Ice Shelf C in the eastern Antarctic Peninsula, that was abandoned in 2017.

While the expedition explores the unique and hitherto hidden marine ecosystem, the current research results give considerable cause for concern. The deterioration of glaciers is often seen as an indicator of global warming. In this respect, it is roughly comparable to the pulse and blood pressure for a person’s state of health.

However, it would be too short-sighted to hastily establish a causal link with climate change – without scientifically sound research such a conclusion would be premature. That is why Rückamp and his co-authors, who, for example, had not investigated the causes of climate change, summarise the situation a little more cautiously: “Glaciers react directly to temperature changes – and vice versa, activities that limit global warming have a direct effect on glaciers. Reports by commissions do not”, warns Rückamp.

Thwaites glacier causes the oceans to rise by 65 cm 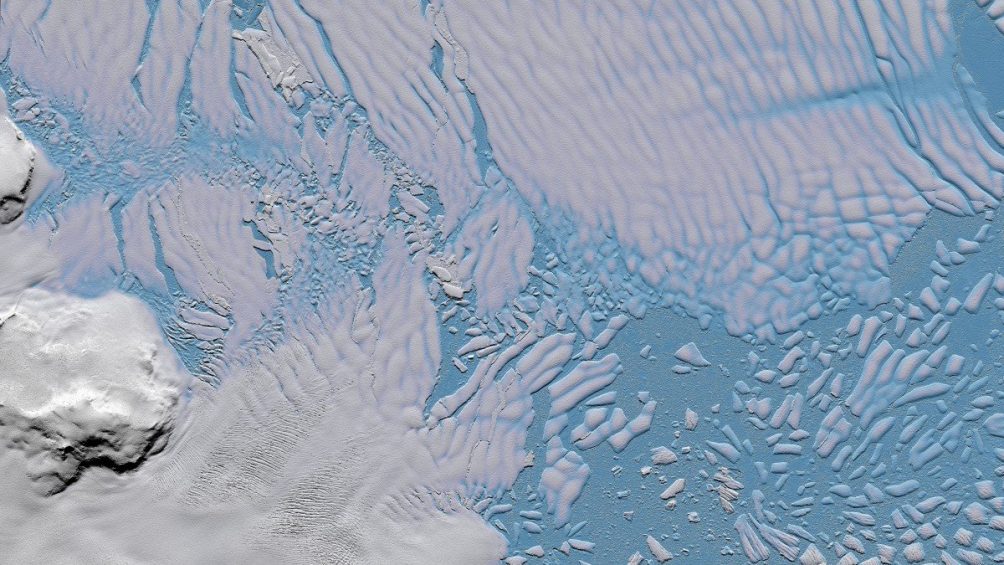 To date, the unstoppable flow from the Thwaites glacier to Lake Amundsen near the South Pole has accounted for about four per cent of global sea level rise. But the remaining masses of ice that melt faster and faster can cause our oceans to rise by 65 cm. At the bottom of the glacier, there is a 350-metre cavity. Although the experts suspected years ago that Thwaites was not firmly connected to the subsurface, they did not expect such a worrying result. A total of 14 billion tonnes of ice have already been washed out. And this especially in the last three years. This is shown by satellite data from American, German and Italian research partners.

The interactions between ice masses and invading seawater have more far-reaching consequences than previously assumed.

The current research results of DLR were made possible by the two German radar satellites TanDEM-X and TerraSAR-X. These are able to perform highly accurate, three-dimensional, high-resolution measurements over the entire area. The melting rate could, therefore, be determined using the TanDEM-X elevation models. They also reveal the special dynamics of the glacier: the peaks and valleys of the ice surface are accurately measured, allowing important conclusions to be drawn about the underlying melting processes. With images from the Italian Cosmo-Skymed satellites, the migration of the glacier’s “touchdown line” – which marks the transition where the ice mass no longer has any mainland under the glacier, i.e. floats at sea – could also be accurately observed over time. The scientists thus came to the new conclusion that although the glacier surface is increasing, the overall thickness of the ice is decreasing. The interactions between ice masses and seawater intrusion have more far-reaching consequences than previously assumed. These and other findings are therefore essential to predict more accurately the effects of glacier melting on global sea levels. The results of the NASA study are currently published in the “Science Advances”-Journal. 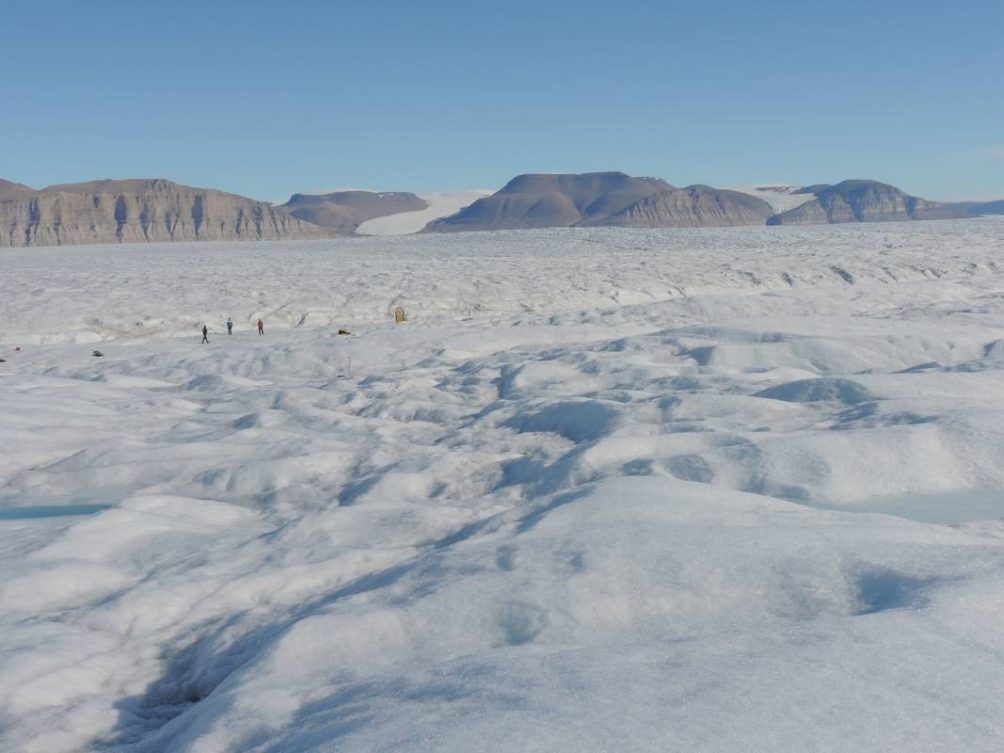 Petermann glacier (Greenland) near the center of the flowing glacier at about 26 kilometers from the calving front. Photo © Andreas Muenchow, University of Delaware.

This kind of data is also coming from the extreme northwest of Greenland: AWI researchers measure a higher flow velocity of the floating ice tongue of the Petermann glacier. This glacier is currently making its way to the Petermann Fjord over a distance of about 70 kilometres. In addition, cracks about twelve kilometres above the previous glacier edge – the Petermann Glacier basin consists of four per cent of the Greenland Ice Sheet – indicate that another iceberg may detach from the glacier in the near future. According to AWI glaciologists, new cracks have formed since an iceberg collapsed in 2012. This is actually a natural process. However, model simulations by the researchers also show that if these ice masses break down, the Petermann glacier will probably bring even more ice into the sea. This, in turn, will have consequences for global sea levels.

When scientists discovered in the winter of 2016 that the glacier flowed at an average speed of 1135 meters per year, i.e. about 10% faster than in the winter of 2011, they investigated the direct cause. They simulated the observed ice transport in a computer model and proved that the destruction of a large iceberg in August 2012 had triggered the acceleration of the glacier. Martin Rückamp, AWI ice modeller and first author of the study, says: “On the way to the sea, the ice masses on the glacier rub against the rocks to the right and left sides of the fjord. Their braking effect decreases and the glacier starts to flow faster.”

The computer model also predicts a similar acceleration in the event of a new iceberg crash. “We can’t predict when the Petermann glacier will calve again and whether erosion will actually spread to the cracks we have discovered in the tongue of the glacier,” says Rückamp. “It must be assumed, however, that the tongue of the glacier will shrink considerably again in the event of further collapse and that the braking effect of the rocks will decrease even further.” This study can be found in the Journal of Geophysical Research: Earth Surface.

Since 2002, the Greenland Ice Sheet and glaciers have lost an average of 286 billion tonnes of ice annually. These mass losses are mainly due to the increase in the melting of the summer surface. The erosion of icebergs has also increased. Greenland glaciers today lose a quarter more ice due to ice erosion than in the comparable period from 1960 to 1990. Possible causes are warmer ocean currents, which melt the floating glacier tongues from below, and melt water, which seeps through cracks and tears in the glacier bed like a lubricant and accelerates ice flows. Currently, the annual loss of ice masses in Greenland contributes about 0.7 millimetres to global sea level rise. This is currently 3.3 millimetres per year.

“The hope of limiting the temperature rise at the end of the century to 1.5 to 2 degrees is becoming less and less tenable. We will probably have to prepare for more, which will have serious consequences and will cost us considerably more globally than if we had acted decisively in the past or even today.”

The extent to which the accelerated transport of ice from the Petermann glacier is due to different consequences of global warming has not yet been investigated in depth by the scientists. “We now see the consequences of ice erosion. We also observe that the frequency of such eruptions increases with the Petermann glacier. Whether this is due to the warmer atmosphere above Greenland or to warmer seawater, we could not determine this from the satellite data,” says Niklas Neckel. For the scientists, however, the acceleration of the Petermann glacier is a signal. Unlike the glaciers in the southeast and southwest of Greenland, the glaciers in the far north of the island have so far hardly changed. This now seems to change.

Great glacier shrinkage in the Himalayas and Hindu Kush

The “third pole” of the earth is the Himalayas and the surrounding mountains. Apart from the North and South Poles, no other region in the world has more ice and snow. Last week there was also bad news from here: even if the most ambitious goal of the Paris Agreement is achieved, the glaciers in this region will melt by at least a third. If that goal fails, ICIMOD researchers expect a two-thirds contraction. The glaciers are an indispensable source of water for about 1.9 billion inhabitants of the region – both in the mountains and along the rivers. “Global warming is transforming in less than a century the ice-covered peaks of the HKH (Hindu Kush Himalaya), which stretch across eight countries, into bare rocks,” says Philippus Wester, editor-in-chief of the report.

The study was carried out in agreement with the Intergovernmental Panel on Climate Change. It was developed in five years and contains findings from more than 350 researchers, experts from 22 countries and 185 organisations. With 210 authors, 20 review editors and 125 external reviewers, it provides an unprecedented insight into the unique environment, people and nature of the region around the cloudy peaks of HKH (Hindukush-Himalaya). ICIMOD includes the governments of the eight countries from the Himalayan and Hindu Kush areas: Afghanistan, Bangladesh, Bhutan, China, India, Myanmar, Nepal and Pakistan.

40 years of the World Climate Conference

There has been a global climate conference for 40 years: the first one took place in Geneva in 1979. On the occasion of the anniversary, Jülich gave climate researcher Prof. Andreas Wahner an interview. Wahner is head of the IEK-8-Troposphere Institute for Energy and Climate Research at the Jülich Research Centre. His last sentence sounds rather alarming: “The hope of limiting the temperature increase at the end of the century to 1.5 to 2 degrees is becoming less and less tenable. We will probably have to prepare for more, which will have serious consequences and will cost us considerably more worldwide than if we had acted decisively in the past or even today.”

The Space Week shows the social importance of space for…
The foundation has been laid - now the Dutch photonics…
In Amsterdam New-West energy cooperatives are responsible…
Dutch Medtech Factory Twente expects first companies in its…
Combatting poverty and debt with the help of Artificial…
The chip industry targets higher performance with integrated…
Manage Cookie Consent
We use cookies to optimize our website and our service. Help us to make our site better by accepting all cookies.
Manage options Manage services Manage vendors Read more about these purposes
View preferences
{title} {title} {title}