“In 2014, when the credit crisis was in full swing, we decided to create a business incubator for the students here at TU/e” says Steven van Huiden from TU/e Innovation Lab . “Normally students studying at TU/e would end up either working in industry or as researchers. But during the crisis there were not so many jobs. We also observed that a new trend came up –  people had developed a much more entrepreneurial spirit and the startup scene was burgeoning. We wanted to facilitate that trend because we saw the potential of the students there: some students had an entrepreneurial mindset and enormous drive. In addition to this, they are super smart and they get the latest knowledge through their education. Some of the students had been running own startups by that time. They just need some experience and guidance during their entrepreneurial pursuits. That is why we thought we should facilitate this more professionally and with full dedication – that was the beginning of STARTUP/eindhoven.”

STARTUP/eindhoven offers its facilities and services like coaching, entrepreneurial programs, network and a flexspace to all TU/e students working on their business ideas. These services do not end abruptly when the students graduate – there is a phasing out period that lasts up to 1-2 years. Van Huiden says: “It depends on how involved the former students still are. And of course, there is a very valuable knowledge transfer to the peers and to the next generations of student entrepreneurs.”

Steven van Huiden recommends the students to take up entrepreneurship during the early years of their studies. “During the first years you probably don’t have too many responsibilities yet, so seize the opportunity to gain the valuable experience of entrepreneurship. The challenge is, however, to balance work on a startup and your studies,” says van Huiden.

“We took an entrepreneurship course, at the end of which we needed to pitch our projects. After that Steven approached us and encouraged us to continue with our idea. Since then he has been mentoring and coaching us,” says Floris Bruinsma, systems engineer of Chairgonomics. Van Huiden adds: “The presentations were a good opportunity for me to scout for new business ideas and new startups. The Chairgonomics team won the Best Pitch Award from that entrepreneurship course.”

Later Chairgonomics took part in the TU/e contest: “Steven advised us to participate in the TU/e contest – a business competition for the students’ projects. As participants of this contest, we got lots of workshops and we had an opportunity to get in touch with really big companies – that is quite valuable.” Chairgonomics also took part in the European Venture Program that involves travelling to three other universities in Europe. There the entrepreneurs can expand their network, gain cultural and local market insights and develop their business case further with the help of peers and experts in the field.

Van Huiden describes his ways of working with the young startups: “During my work with Chairgonomics and other startups, I focus on helping them to expand their professional network and to increase their visibility. I also give them feedback on their activities and working documents. Competitions, international programs, even interviews like this – all of this helps to attract the attention of companies, their customers and financiers. The students are the entrepreneurs here, they do most of the hard work. I just guide them in the right direction and make them aware of the mistakes they can possibly make.” Floris Bruinsma says: “Coaching provided by STARTUP/eindhoven prevents us from falling into the pitfalls on the way of a technical professional and entrepreneur – for example, like focusing too much on the product and not on your business case.” Van Huiden says: “Currently we provide coaching on a one-on-one basis but if everything goes well, next year Bright Move will start a new incubator program. It might be 6 weeks straight and a bit more extensive – I think that can be useful for our startups. The only thing that we lack here is a building to house all of the startups. We do, however, have some office spaces for the student entrepreneurs here, in the Multimedia Paviljoen.”

The smart sleeve for the office chairs

Chairgonomics is working on the solution for a healthier work situation behind the desk – a smart sleeve that you can put over the chair and it would help you to keep a healthier posture. Floris Bruinsma and Raoul Melaet are demonstrating it: the prototype looks like a cushion padded with sensors, so when someone is sitting on it, the software on the laptop connected to the prototype indicates which parts of the cushion carry the load. “You will get feedback when you start sitting in a wrong way. For example, when you are sitting for over two hours without a break or when you start slouching,” say Bruinsma and Melaet. The sleeve will also be used to reinforce good sitting habits. “We want to gamify the whole process: to create a scoring system to compete with co-workers,” says Bruinsma.

Currently, Chairgonomics is working on a new prototype: “This prototype is made in collaboration with a TU/e professor, who has been doing research on it already for more than a year”, says Raoul Melaet. “Initially, there had not been many practical applications of the innovative sensors that you can see here. We are working on improving these sensors and also on the ways of the measurements and data collection. These sensors are very flexible and also watertight – you can spill water or coffee on the prototype or even submerge it!”

The students are talking about their invention with great passion, and Steven van Huiden notices it: “You can see that when they can talk about the prototype, their eyes sparkle and they become quite enthusiastic– this is very important and typical. But they should also keep a focus on the business side of course. Chairgonomics is making great progress, as you see they have gained a lot of experience and started thinking in a different way. I think Chairgonomics has a lot of potential and soon there must be a moment to go outside to engage with the potential customers and the end users of their solution.” 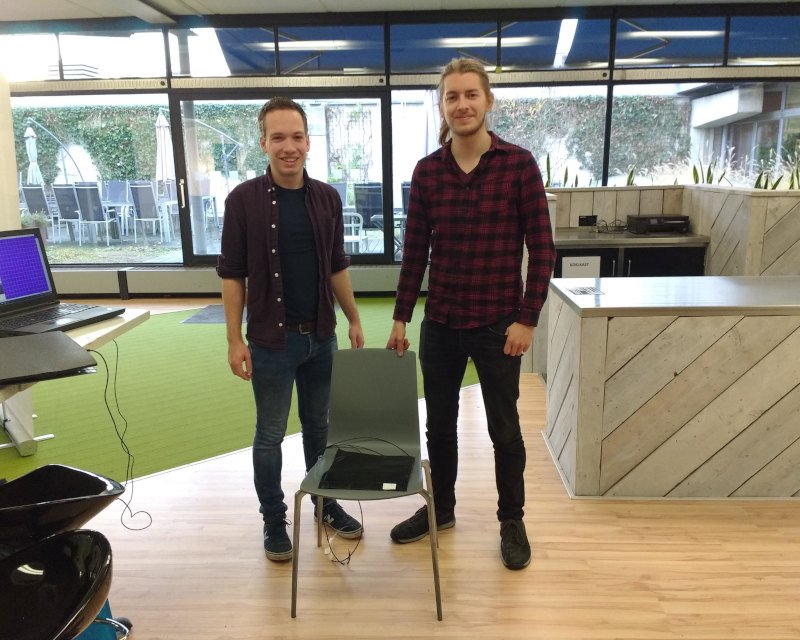 Move to live: how Move to Be wants to get the country…
'Quit your job for one day a week'
Still plenty to learn online about international…
Team CORE uses shredder to safely chop up batteries in salt…
'I hear too often that women have to be harder, more…
Living in your own sustainable social housing