They’ve been working on something for fifteen years at TU/e that some are calling a new revolution: integrated photonics. A technology through which light is generated and manipulated in the same material so that it can be applied in different ways, from faster Internet to the detection of diseases in your breath. Around 50 million Euros have been invested into the TU/e research over these years. Now that the knowledge is there, it’s time for the next step: entering the market. That’s where Smart Photonics comes in.

We’re talking to Richard Visser, CEO of the company, about optical fibres, data bundles and photons. And how to get investors on board.

“There are no courses on it in the Netherlands. Maybe that’s why it’s so unknown.[expand title=””]Photonics forms part of the Electrical Engineering and Applied Physics course at TU/e. This can be followed by a PhD in Photonics.[/expand] Photonics focuses on the interaction between electrons (electronics) and photons (light) and the conversion of one into another. You can find its applications everywhere. Think about the laser transmitting information through optical fibres, LED lighting and solar panels.

I think you can compare the impact of photonics to the chips that are now in computers. Fifty years ago no one had ever heard of them, now everyone knows them. What they’ve developed at TU/e over the last fifteen years is basically the same, but with light instead of electricity. It offers a lot of advantages. You can process more data in the same time unit with photonic chips via optical fibres than with the current electronic systems. Besides, photonic chips consume considerably less energy.

But the best thing about the technology that TU/e has developed – integrated photonics – is that they’re building blocks. A kind of lego that you can use to build anything. We call the use of those photonic building blocks Photonic Integrated Circuits (PICs).”

And that’s what you do?

“Yes, we are one of the few PIC-producers in the world. We made the firm decision to develop photonic components and produce them for others. So we don’t make our own products, rather we offer our expertise, experience and production facilities to manufacture other companies’ products.

We do this with Multi Project Wafer runs, which we start once a year. So several clients can have their own design manufactured in the same production batch. In each run there are around ten to fifteen clients, which might also be universities and institutions. They can then test their designs (made up of these building blocks) using this new photonic integration technology.

The best part is that interesting things happen every time. Our clients include large companies in the telecom marketing sector, as well as medical organisations. We’re working on an application of photonics called trace gas analysis, for instance. This allows you to detect particular diseases in your breath, even in very small concentrations of gas.”

“Doing the world’s first commercial Multi Project Wafer run was a huge highlight. Another was the investments that we raised last year.” 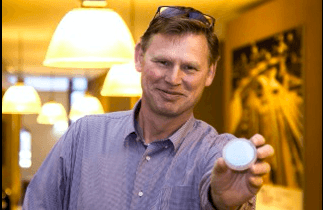 How did you manage that?

“It was a special investment round, seriously, one of the best things I’ve ever done. My accountant and I came up with the idea to go and talk to some people in his network. Totally different people. We sat down with them, all of them really nice people who liked what we were doing and wanted to get involved. In the end we had thirteen Dutch and one Belgian informal investor.”

What’s been the most important lesson you’ve learned?

“It really is hard work, it’s a roller coaster ride. You hit a wall every now and again and then you go completely outside the box, because that’s when the best things happen.

What I notice above all else is that, as an entrepreneur, you’re working in a lot of different areas at the same time. Sometimes your afterthought is: I should have paid more attention to that. But it’s going well and we get loads of support too, from the Innovation Lab at TU/e, for example.”

Photonics is known all around the world, but the generic integration technology originated here in Eindhoven thanks to Professor Meint Smit’s group at TU/e. We want to expand this ecosystem and it has to be near TU/e, because that’s where the development is taking place. The factory that I’m hoping to finally set up needs to be close by too. Preferably on the TU/e campus,” laughs Visser. “That way the researchers can easily talk to the people in production. That’s why we started Photon Delta here in Eindhoven with a few other parties. It’s a cluster of all things photonics to help get Eindhoven even more established as a leader in this area.”

“We want to have a full production unit in 2018. That will allow us to make large amounts of chips. We expect demand to explode by 2020. Then there’ll come a day when a client says: I want 10,000 chips now. We want to be prepared for that.

And we’re always on the look out for great staff. At the moment the team is made up of physicists, chemists and electrical engineering experts. All top-notch. The next step is to hire some ambitious MBO students. We want to train them internally to produce this kind of chip. Did you know that more than a thousand operations are required to make one?”

This is the ninth profile of an Eindhoven start-up from this year’s Top 10 Start-ups to Watch. Read all of the profiles so far:

From PhD to a business: TU Eindhoven spinoff MicroAlign is the next result of the university’s valorization efforts