Together with the editorial staff, our audience has decided who’s taken June’s prize. And now we know: the Italians from Innovacarbon have won the competition! Both our readers and our editors found that their idea of using nanotechnology in order to provide clean drinking water is the best of the month. 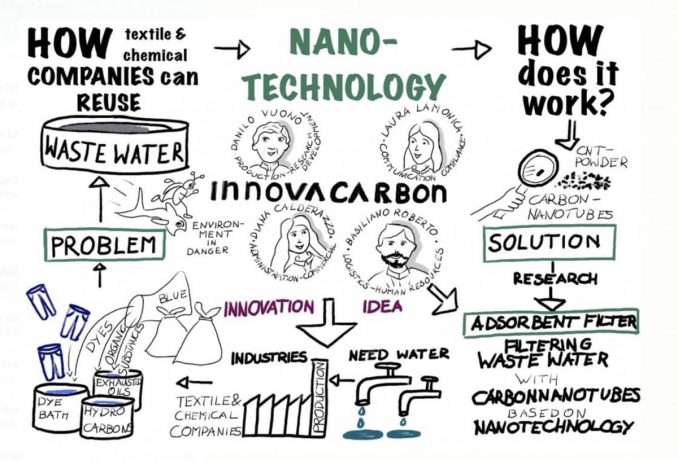 Confidence in the future

“We would like to thank everyone who voted for us, this confirms our drive that we have felt from the beginning. People understand what we want and share our vision, which gives us a lot of positive energy,” says Danilo Vuono, one of the founders of INNOVACARBON.

Vuono believes that we are at the beginning of a revolution and that more and more people see that nanotechnology is able to overcome the challenging obstacles facing humanity. “This victory motivates us to keep going and raise the profile of our technology. We are in the process of raising money through fundraising and such awards will help build investor confidence. This confidence can be transformed into funding, enabling us to further develop our product.”

The Italian company Innovacarbon wants to start a revolution. What kind of revolution? A revolution in the field of water sanitation. They developed a carbon nanotube that can be used to filter water. And this can provide a solution for both nature reserves and drinking water.

The tiny carbon tubes start working independently to react to undesirable substances in polluted water. Water becomes purified because these substances connect with the carbon particles. The application is versatile, economical and also recyclable, which means that you can permanently purify your water with a batch of carbon nanotubes. In the 21st century, clean drinking water for all is one of the greatest challenges facing the world’s population.

Why is this such a great plan?

The UN sees this as one of the biggest challenges in times of ever-increasing drought and global population. In most Western countries, it seems as if it is the most normal thing in the world: clean drinking water from the tap. However, figures from the World Health Organisation show that more than 800 million people worldwide, roughly as many as those currently living in Europe, do not have access to clean drinking water.

This brings with it all kinds of dire consequences. A water crisis is also a health crisis, with nearly 1 million people dying each year from polluted water or from diseases caused by it. A disease such as cholera, for example, is able to spread wildly in places where there is no clean water close by. People also die every day from dehydration as a result of diarrhoea.

Collecting water from wells in the poorest areas of the planet is often a task for the children of families, especially girls, who sometimes have to walk up to 20 kilometers to get to a water well. They are unable to go to school because they have to go on this hours-long trek. So when you solve the drinking water crisis, you immediately solve an education problem.

And this problem seems to be getting worse because of a rising world population and an increase in droughts and global warming. Besides, while clean water is the basis for human development, it is still greatly underestimated. In order to solve this problem, we therefore need accessible water purification systems all over the world, preferably those that can be deployed quickly and do not cost too much money. Innovation Origins believes that this Italian nanotechnology could be the solution.

Every week Innovation Origins selects a monthly winner from the numerous inspired start-up ideas that we cover. Every workday you will see a new Start-up of the Day that subsequently competes in the Start-up of the Week competition. So each month there are four or five weekly winners who then go on to the next round for Start-up of the Month.

Weekly recap: Gerard, Anton, and Frederik
Clean drinking water for rural areas using solar energy
'Universities should build a Silicon Valley around…
Share.eu donates a day of clean drinking water in needy…
'The best scientists also have start-ups'
The Space Week shows the social importance of space for…
Manage Cookie Consent
We use cookies to optimize our website and our service. Help us to make our site better by accepting all cookies.
Manage options Manage services Manage vendors Read more about these purposes
View preferences
{title} {title} {title}