The Economic Bureau of ING expects economic growth in Eindhoven to reach around 3.6% in 2018, compared to 3% as a national average. Together with East Zuid-Holland, Eindhoven is the leader in the Netherlands. There is a broad basis for this growth, ING says: “Of course, the industry is an important contributor, but sectors such as construction, ICT, and business services are also doing well. This is noticeable in the labour market, the number of people in employment is rising and regional unemployment will fall further to 3.5% in 2018.”

The peak of 2017 will not be equaled. Nevertheless, the bank speaks of an ‘impressive series’. “The expected economic growth rate of close to 5% in 2017 is impressive and not isolated. 2018 promises once again a lot of good things to follow on from a series of strong years. Extra attention to Brainport in the coalition agreement and government investments in infrastructure, among other things, will also strengthen the attractiveness of the business climate in the longer term. ASML, Philips and VDL act as drivers of a network of companies that want to offer the solution to global challenges from a technical point of view. Many companies in the region are directly or indirectly linked to this.”

G4 or G5
ING says it understands Eindhoven’s ambition to join the G4, the large four cities of Amsterdam, Rotterdam, Utrecht and The Hague. However, the bank also has a number of reservations. “There is certainly a reason to join, in terms of economic growth. In terms of population, however, Eindhoven is growing less rapidly than the other major cities and the gap in the number of inhabitants is widening. For the time being, this is the Achilles heel in the argumentation. The transformation of offices and industrial buildings into homes has led to an impulse for the housing stock and Eindhoven is also taking steps as a shopping city. However, if the region is to make a leap, the population will have to grow faster.”

Unemployment
Since 2014, unemployment in the Eindhoven Region has fallen sharply. This drop will result in an unemployment rate of 3.5% in 2018, which means that the region is back to around the 2008 level. The labour force has continued to grow in the meantime, with a marked change in composition. The 45-75-year-olds are now the largest group on the labour market, except in the city of Eindhoven itself. The main reason why unemployment is falling is that the number of vacancies has increased in the past year. Regionally, the number of new vacancies rose from an average of 7,500 at the end of 2016 to 12,500 at the end of 2017. This increase is relatively stronger than national and the average for the whole of Brabant. The challenge of making better use of the region’s potential and attracting people from outside remains unabated.

Netherlands
The Dutch economy will continue to grow strongly in 2018 at nearly 3%. Regional disparities are large. Seven of the twelve provinces are growing faster than national ones. Economic growth is highest in Flevoland and Utrecht. In the northern provinces, economic growth will continue to lag behind in 2018. Regional disparities in economic growth also reflect different developments in the labour market. The direction is the same, but employment growth, unemployment decline and increasing labour market tightness vary by region.

See below for all Eindhoven, Brabant and national infographics. 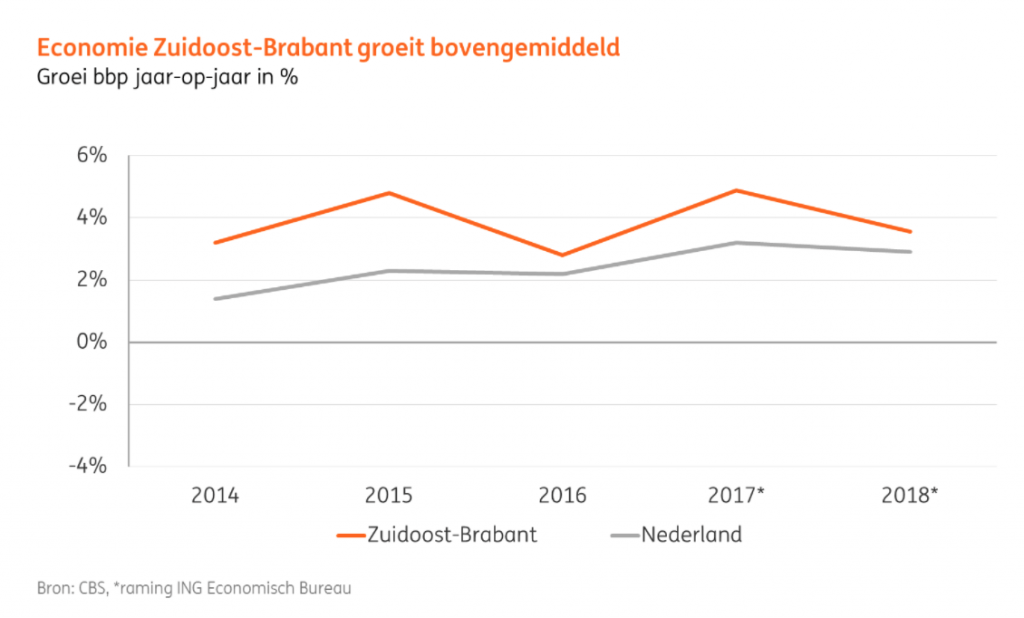 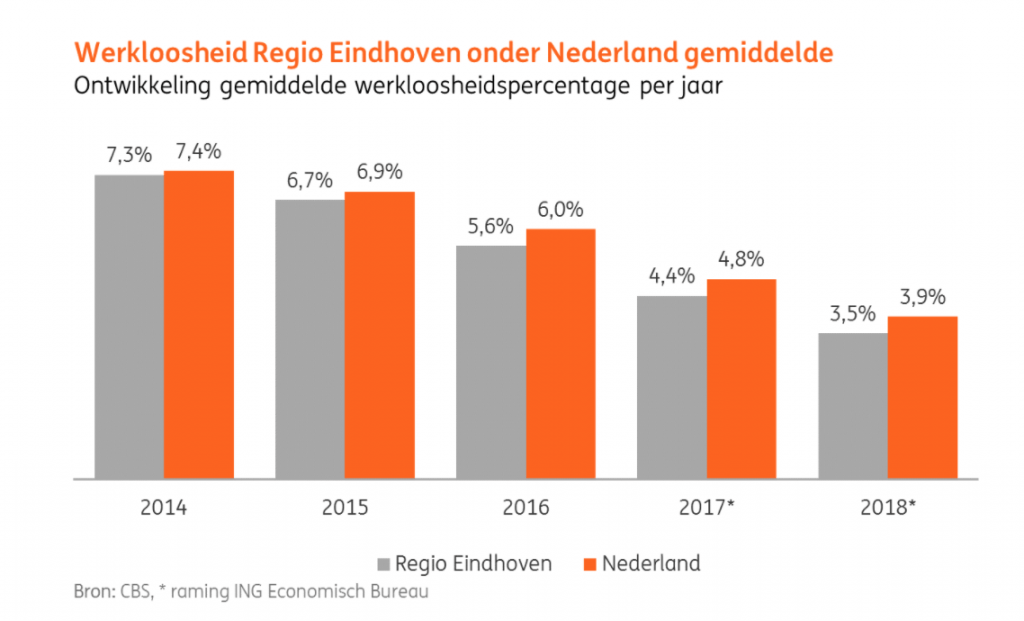 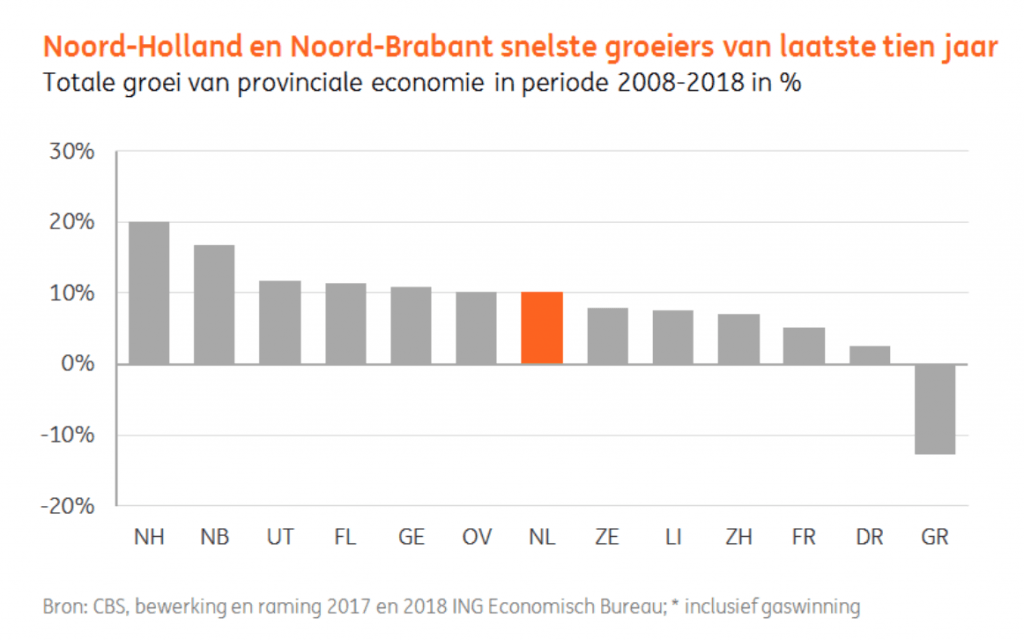 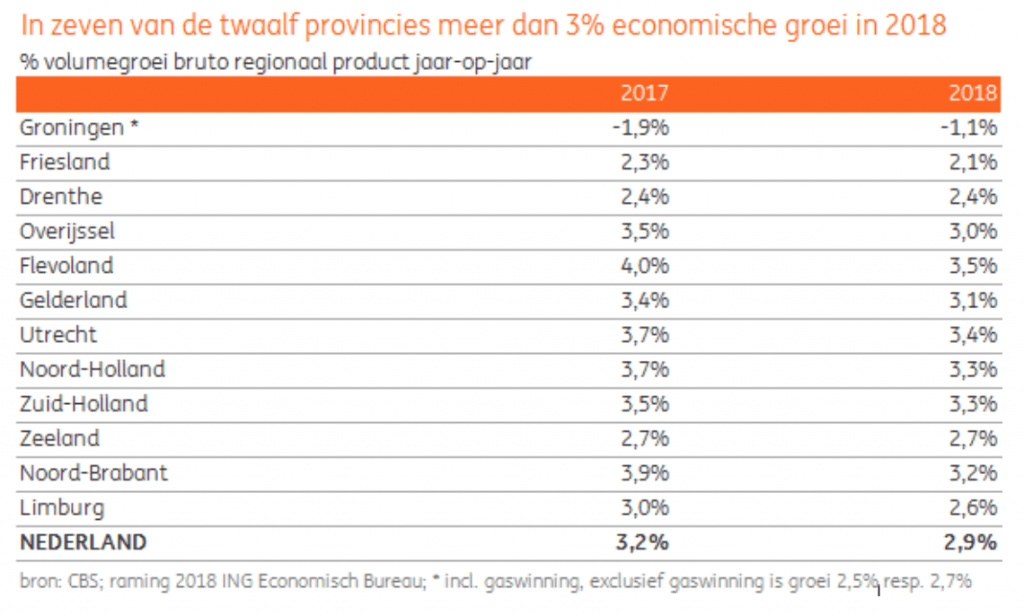