[Update] This week Innovation Origins reported on a dispersion coating that uses photosynthesis to kill viruses and bacteria. We based our findings on a press release from the Dutch company Drukwerkdeal.nl. At the request of the manufacturer of the coating, the German company Varcotec, we have decided to partially withdraw that story because it allegedly contains inaccuracies.

Drukwerkdeal.nl, one of the largest providers of online printed matter in The Netherlands and Belgium, has informed us that for the time being it no longer offers the products with the dispersion coating on their website and apologizes for the incorrect information provided.

Below, the original article as reported earlier today

We all know by now from COVID-19 that there’s a risk that the virus can survive for days on any kind of surface. From the refrigerated compartment in the supermarket to a shopping mall railing. Unfortunately, the coronavirus is not unique in this respect. For example, the common flu is also known to survive for days on a slippery surface such as paper. The e-coli bacterium can even survive for months on end.

It’s a problem that the German University of Regensburg has been working on for some time. In mid-2019 they brought out a study on a new type of coating that uses photosynthesis to kill viruses and bacteria, published in the Journal of Hospital Infection. It was initially intended exclusively for hospital use. But a German paint manufacturer (Varcotec) thought that it might be a technique that could also be used for antibacterial dispersion coatings in the graphics industry. And now this coating, called “Lock-3“, has also reached The Netherlands. 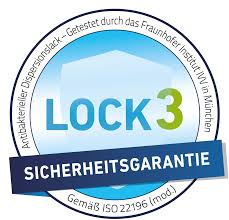 The Dutch company Drukwerkdeal.nl announced today that it will use the new technology for virus-free and bacteria-free printed matter such as flyers and leaflets. Managing director Haico Meijerink states in a press release: “Our European partner network enables us to find and offer these kinds of innovations to our customers at lightning speed. We see a market particularly for companies that serve a broad public. Consider, for example, supermarkets and (hospitality) companies that are now delivering products to customers’ homes.” Drukwerkdeal is the largest online provider of printed matter and marketing materials in The Netherlands and Belgium.

According to spokesman Lourens Scholing van Drukwerkdeal, the coating used is somewhat similar to suntan lotion. Except that it works precisely the other way around then. The coating is based on a photosynthetic process that accelerates the detrimental effect of sun- and other light on cell membranes of viruses and bacteria. Germs that come into contact with the coating die off almost immediately.

Transition in the chemical sector: many opportunities, but…
Fraunhofer develops Europe's first industrial testing…
Bones can be constructed like prestressed concrete
New method for separating molecules
Novel molecular machine for energy and nanomedicine…
Sustainable production calls for a different design of…
Manage Cookie Consent
We use cookies to optimize our website and our service. Help us to make our site better by accepting all cookies.
Manage options Manage services Manage vendors Read more about these purposes
View preferences
{title} {title} {title}