Ten startups from Eindhoven have been honoured with the Gerard and Anton Award 2016. The jury of the awards thinks these ten have all it takes to follow the footsteps of Gerard and Anton Philips who, 125 years ago, formed the first truly successful startup in the region. Every day we highlight one of those startups. Today: Etulipa.

Here are all ten winners

Here’s everything on the Gerard & Anton Awards

You can easily call BlueJay a strange fit in the Startup to watch top-10 list. Officially it’s nog (yet) a startup but a student team at the TU/e. But nevertheless the jury is convinced of the innovative character and therefore Blue Jay deserves a spot on the list. E52 spoke with Tessie Hartjes. She’s teammanager of Blue Jay.

More a team than a start-up, BlueJay is exploring the future of drones. Their discoveries might change our lives in unexpected ways.

The current team of 18 members are done after this summer, they will make place for a new group of students. “For us it’s done. It was a really busy, but extremely interesting year.” A year full of highlights, with a demonstration for Queen Maxima at the opening of the Singularity University, the opening of the world’s first pop-up Drone Café, and last but not least BlueJay attended the Hannover Messe. Where Prime minister Rutte saw the different implementations of Blue Jay. “You know what’s a funny thing? He already saw us on the news. It’s incredible to make people think about the future of drones. We just finished the Drone Café and went to Hannover. That’s another order of magnitude. We’ve met a lot of interesting companies and people. And we saw so many new things.”

Future of drones?
In addition to developing an autonomous drone, which can do a lot of indoor tasks, the team tries to crank up a discussion. “We truly believe that in the future drones will play a big part in our daily lives. Recently I had an interview on the radio, believe me, I really had to bite my lip. They were going on about negative examples of drones. People don’t know the good things that can be done with a drone. For example, in Africa poachers are being chased away with drones. Or packets of food are dropped off with them. Imagine that drones could scan burning buildings for people still inside, how great would that be?”

How do you do it?
When BlueJay first started, nobody in the team had actually worked with drones before. They all had to move to unknown terrain. “Google was our best friend in the beginning. There are so many great inventions. You would be crazy to reinvent the wheel. We visited companies that are working with drones to see how they approach things. We learned the do’s and don’ts about drones. We worked on fast prototyping. That means that you don’t have to build every piece yourself, but you improve existing parts. Except from the surrounding, that part was totally built by ourselves. Finding the right system to make the drone fly stable indoors is quite a job.” The students tried everything: from a camera tracking system – “That’s way to expensive!” – to GPS – “Too inaccurate  for indoor flying.”

Finally they choose for a combination of systems: “Philips lightning has a lamp that can be connected to wifi, it sends a certain frequency whereby the drone can determine his position accurately. A laser that constantly measures the distance to the ground, determines how high the drone is flying. The great advantage of this system is that users don’t have to cover their whole house with cameras. Only replacing the lamp is enough.” 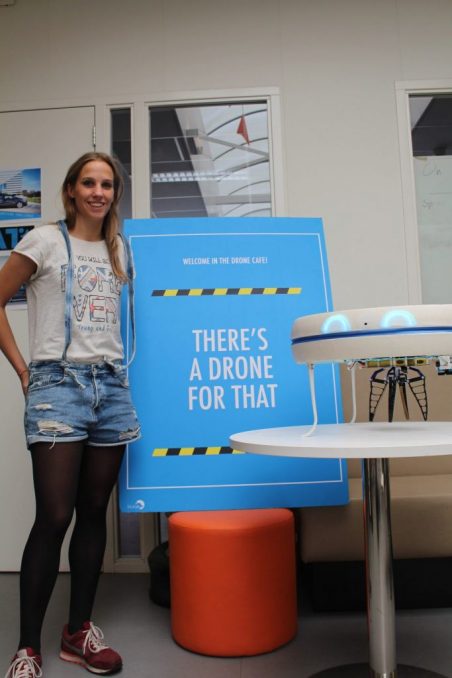 Whether Hartjes wants to start a company out of Blue Jay she hasn’t decided yet: “That’s a thing we want to discuss with the team after the summer, because there are serious opportunities for us.” Despite that BlueJay isn’t a startup, they were asked to join the accelerator program of High Tech XL. “We don’t even have a business plan, we first have to examine our added value.” Hartjes stops talking and closes her eyes for a moment, after a short break she continues: “Before I make a decision I want to think about it first, and have a vacation. It has been a busy year and it wouldn’t be good to rush things.”

Hartjes knows that when BlueJay is going commercial, some things will have to change. “Almost three quarters of a year we spent on improving the technical part, that’s too long. Technicians are proud people, before they show their idea to the world they want it to be perfect. But that’s not the way to get a better product. I think for some startups this is a recognizable issue. You must not be afraid to ask for help. Furthermore it is extremely important that everyone in the company is dedicated to aim at the same goal. Because we are a student team, we have people working half time, they only feel responsible for their own tasks. If this was a company I would not accept that. To make this successful, you need a strong base of people who are completely committed to BlueJay.”

Read more on BlueJay and their indoor drone

The enterprising student easily beats professor
Improve the start-up ecosystem? 'Look beyond city limits'
'A university is not a patent machine'
Developing a quantum computer takes more than just money and…
Dortmund: where innovation drives community spirit
This will make microplastics obsolete