Patent statistics published today by the European Patent Office (EPO) show that for the first time in more than a decade, digital technologies have taken the lead in patent applications filed. According to the EPO Patent Index 2019, the surge in the fields of digital communication (+19.6%) and computer technology (+10.2%) is fuelling the sustained growth in patent filings: In 2019, the EPO received well over 181 000 applications in total, 4% more than in 2018 and a new all-time high.

“The rapid rise of digital technologies is the most striking trend from our 2019 index,” said EPO President António Campinos. “The digital transformation of the economy is now fully reflected in the patent applications reaching the EPO.” 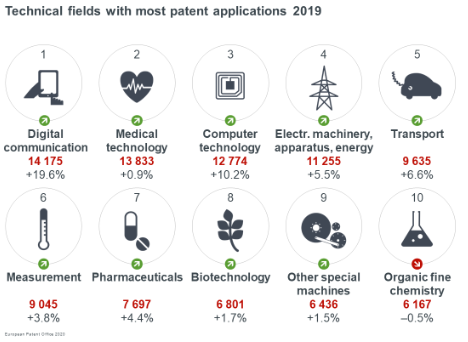 Among the top technical fields at the EPO, digital communication and computer technology saw the steepest growth, highlighting their key role in driving the digital transformation that is permeating all sectors and industries. Patent applications in digital communication grew by +19.6% in 2019, overtaking medical technology (+0.9%), which had been the most patent- active technology since 2006. (Graph: Leading technical fields) This field, which lies at the intersection of telecommunications and computers, includes technologies that are crucial to implementing 5G wireless networks.

Most applications from Chinese companies

With an increase of 64.6%, Chinese companies contributed most to the growth in digital communication patent applications, with US (+14.6%) and South Korean firms (+36.1%, albeit from a smaller base) following suit. By comparison, filings from Europe grew moderately (+3.1%). In terms of share, China, the US and Europe are now the joint leaders, each accounting for roughly a quarter of all patent applications filed with the EPO in this field. The top three applicants in 2019 were Huawei, Ericsson and Qualcomm.

The second fastest-growing field at the EPO in 2019 was computer technology (+10.2%). Here the driving factor for growth was the increase in patent applications related to artificial intelligence, especially in the areas of machine learning and pattern recognition, image data processing and generation, and data retrieval.

US companies (+13.6% over 2018) accounted for nearly 40% of all patent applications in computer technology, followed by EPO member states (+9.3%) with almost 30% of the total. Applications from China (+18.7%) made up just over 10%. The leading applicants in 2019 were Alphabet (Google), Microsoft, Samsung, Huawei, Intel and Siemens. (Link to graph: Leading applicants, computer technology). A significant proportion of the growth in 2019 also came from smaller applicants, and from new players.

Other technical fields with solid growth at the EPO in 2019 were: transport (+6.6% over 2018), which includes the automotive sector; electrical machinery, apparatus and energy (+5.5%), where many inventions for clean energy technologies are filed; and pharmaceuticals (+4.4%). European companies held the largest share of patent applications in transport, measurement, organic fine chemistry and “other special machines” – an area covering a range of technologies including machine tools for various industries and 3D printing. The EPO plans to publish a report on patent applications in the area of 3D printing next month.

Patent applications from the 38 EPO countries grew modestly (+1.1%) in 2019, the third year of increase. In relative terms, the share of patent applications from Europe continued to slide, however, falling from 51% in 2009 to 45% in 2019, as more players from outside Europe, and especially Asia, seek to protect their inventions in the European market.

Patent applications coming from the EPO member states developed stably overall, with most firms filing more patent applications than in 2018. Sweden (+8.0%) was the growth champion, boosted by increases in applications related to digital communication and computer technology. Patent filings from the UK (+6.9%) and Switzerland (+3.6%) continued to increase significantly, too, while filings from Italy advanced by +1.2%.

After two consecutive years of growth the number of patent applications coming from Europe’s top filing country, Germany, remained stable (+0.5%), while France (-2.9%) and the Netherlands (-2.6%) saw decreases last year. The drop in patent filings from France was due to fewer applications in fields such as digital communication and automotive, while in the Netherlands, lower numbers of applications were filed in a number of sectors, including medical technology and biotechnology.

There were also significant increases from countries with smaller patenting volumes, such as Ireland (+6.3%) and Norway (+3.6%). Portugal (+23.1%) and Greece (+15.8%) also both saw their third year of consecutive growth, albeit from a smaller base.

The technology trends were also reflected in the country data. The top five countries of origin for applications in 2019 were the US, accounting for 25% of total filings, followed by Germany (15%), Japan (12%), China (7%) and France (6%).

The company ranking also reflects the rapidly growing importance of digital technologies. Huawei topped the table of patent applicants at the EPO in 2019 with 3 524 applications. Samsung moved up to second place and LG gained a position to take third. The two South Korean firms were followed by US company United Technologies and the top applicant of 2018, Siemens at No.5.

Arnoud Cornelissen has for many years been writing about science and technology in, among others, various Dutch newspapers.