Within the next five years, the acquisition of an international skill set must be an integral part of primary, secondary and vocational education in the Brainport region. Meaning: education in two or more languages, focus on cultural diversity and skills of the 21st century. The goals were presented om November 30, in the educational vision “We are the Future“. The paper was established through a collaboration with educational institutes, companies, government, parents and children.

With the increase of diversity and internationalisation of modern society, companies and organisations are looking abroad. This can also be seen within the Brainport region, where there is an ever increasing number of knowledge workers settling here.

This is, amongst other reasons, attributable to the growing shortage on the labour market. Especially the vacancies with technical or ICT profiles are ever increasingly difficult to fill. As a result there is a larger demand to attract talent from beyond our borders. Filling this void is an issue not only for the large multinational such as ASML and Philips, but also for the SMEs. 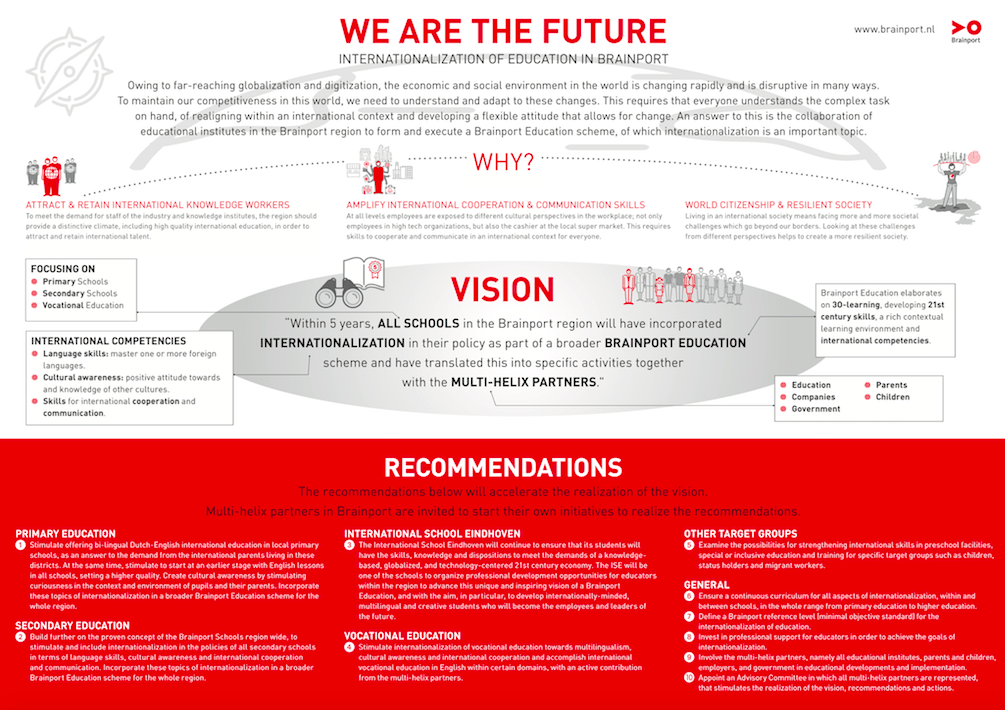 ASML’s Harry de Vos says that the expat we used to know is almost non-existent nowadays. “At ASML we see a transition to international knowledge workers who settle and work in the region for prolonged periods of time. This means that the facilities and provisions for internationals are of increased importance” according to the worldwide HR responsable at ASML. Examples of this are the English information in healthcare and housing and English cultural programs. De Vos: “Offering international education is one of the key requirements to not only attract, but also retain international talent.”

International skills, such as mastery of the English language and international communication and collaboration is not only of importance for the international community in the region, but is also an imperative requirement within local education, according to Jack Mikkers, Mayor of Veldhoven and one of the driving forces behind ‘We are the Future‘. “Everybody is exposed to a globalizing world and must be able to adapt to these changes. This requires change in education. That is the basis and essential for future competitiveness of our country and our region. We are the Future says it all, together we will make the future.”