The largest VR Center in Europe will be opening on the seventh floor of the Veemgebouw on Strijp-S today. At a whopping 3000 square metres, the space will offer visitors the opportunity to play and experiment with virtual, augmented and mixed reality to their heart’s content. We met up with Tim van der Grinten at the place where it’s all happening. 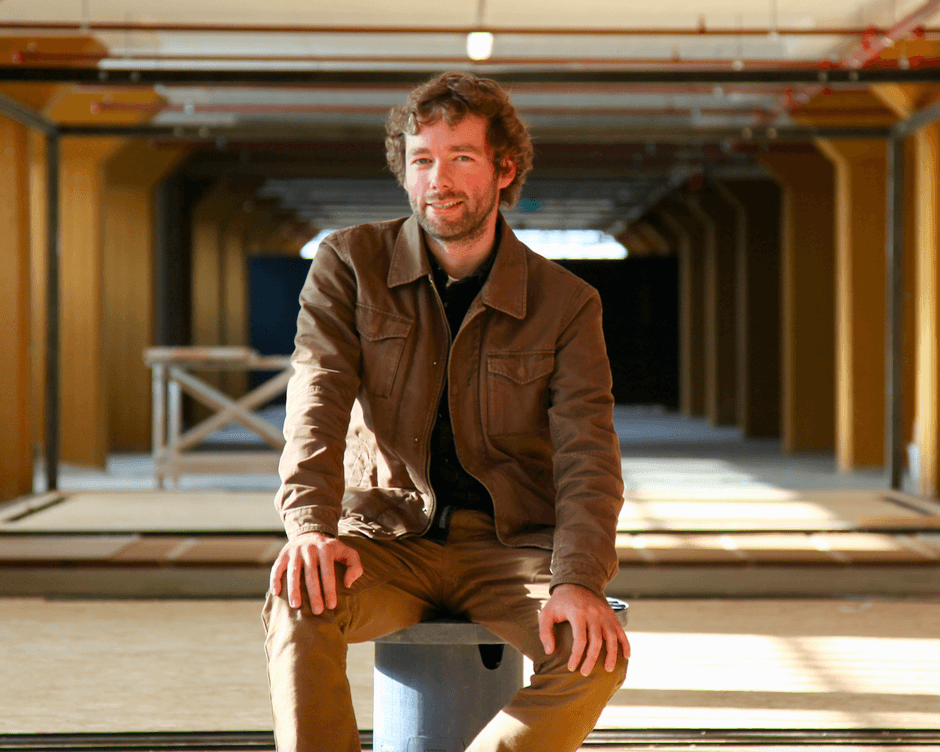 What do you think is the most exciting thing in VR and AR at the moment?

I’m most curious about the impact VR is going to have. I hope it creates a humanisation of our digital communication. Two people could really meet one another, even from two different corners of the world. It’s different from what you can already do with Skype. You’re not really looking at each other with that. I don’t think we’ve ever been able to exploit the human potential in the digital world. The Veemgebouw plays a very important role in that. I see our VR Center as a petri dish – you can try things out. VR ideas are physically introduced and can take shape.

Is it important for VR to have a venue where it’s physically introduced?

VR isn’t tangible, so it’s a question of how you make it a physical thing. Here we’ve got 3000 square metres at our disposal. We’ve built a large steel frame with movable units and you can try out a different VR project in each space. We already know quite a lot about the medium, but there’s still a gap between research and realisation.

Teams and groups of friends can also play games together at the VR Center. How can you be ‘together’ in a virtual world?

The games we’ve developed here are usually played with someone else. With these you can only see where the head and the hands of the person currently playing are. The rest of the team that isn’t playing can sit on the sofa and watch what they do. We have a game where you’re a cook and you have to make burgers as quickly as possible, for instance. Your friends sit in the same space and can look at the screen to see if you’ve beaten their score.

What’s happening in the world of VR and AR in Eindhoven?

As a city, Eindhoven is a great combination of creativity and high tech. I think VR forges a bridge between these two worlds, and that can be seen in many of the companies in this area that have anything to do with VR. Even students are doing exciting things with it. We work together with programmes at NHTV Breda, Fontys and St. Lucas, which is just around the corner here at Strijp-S.

The VR Center is located on the seventh floor of an old Philips warehouse. Why this spot?

We have 3000 square metres where we can really experiment and let others discover the possibilities of VR. And it happens to be right across from our office at Founded By All in the Klokgebouw. The Trudo housing corporation had an open call for the Veemgebouw and we wrote them a letter. There are also a lot of other great projects going on in these premises, including, of course, Vershal on the ground floor.”

What’s the weirdest thing you’ve ever experienced with virtual reality?

It’s really funny to see what happens when people put on a pair of VR glasses. They forget that they’re not actually in that world. Recently there was a young lad who saw something amazing in the VR glasses and reached for his phone to take a picture of whatever it was that he ‘saw’.” He chuckles, “That sort of thing happens a lot.”

And in real life?

“Ehh, something weird…? Well, sometimes I wonder: what if? What if I hadn’t have won that prize after I graduated, what if I then wasn’t going to build the Heijmans ONE (a fully movable house). What if… And now we’re here. We’re opening the first phase of Europe’s biggest VR Center on 22 October – a project that isn’t finished and will always be evolving. The goal is the activity. As soon as something’s done, it starts to age.”

The Virtual Reality Center will first open during DDW. Try everything from gaming and overcoming your fear of heights, to building a city with someone on the other side of the world. Entrance fee: €3