She is extremely proud, Wilitha Theuws, a resident of the Geldrop neighbourhood of Coevering. Her ‘Get together-cart’ is part of DDW, placed prominently in front of the building of Woonbedrijf. In two-hour shifts, she and other residents share coffee and tea for free to passers-by. As an invitation to come and take a look inside, where the exhibition ‘Way to GO-design’ can be seen. 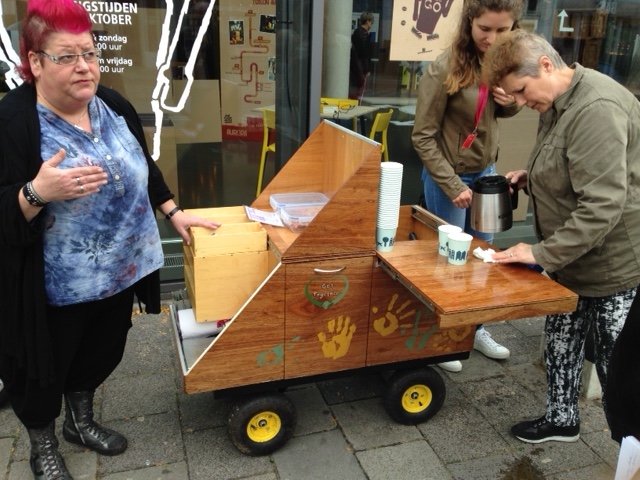 Theuws wanted to do something about the community in the district, nobody greeted each other and the district had a bad name. People call it ‘Boevering’ a place for thiefs,”, says the inhabitant who moved from Bergeijk to one of the seven flats of the Coevering five years ago. Even before she got the cart, she went to the nearby Strabrechtse Heide with two bottles of coffee in her mobility scooter. She wanted it differently and applied to the Woonbedrijf neighbourhood culture fund. She came into contact with designer Tsjalke Bouma. With h, r she invented the ‘Get together cart’ with which she goes to the forest every Wednesday and Saturday afternoon since 29 June 2014.

“In the end, we are not so much concerned with the product as with the process of creating it. We now know that you just get a better product.”Angelique Bellemakers, District manager Strijp Woonbedrijf

With five projects, Woonbedrijf shows that it is important to enter into dialogue with residents and future residents, says Angelique Bellemakers, district manager for Strijp at Woonbedrijf. “All five projects have value, but they are totally different, with one similarity: you are always in dialogue with your customers and that actually gets things done in a right way. In the end, it’s not so much about the product as it is about the process of creating it. By working this way, we now know that you just get a better product out of it.” And that better product cannot be measured in cash or any other measurable value. That’s why during DDW, residents, designers, and employees of Woonbedrijf tell the audience what it brought them.

Curator and co-designer Cindy van den Bremen put together the DDW exhibition for the third year. “We chose the title: The Way to GO-Design. Because it is not the case that we, as a residential company, pretend to know the answer to how to co-design. With five projects, we show the journey we have made. In all five projects, the designers have played the role of facilitator.”

Gerretsonhof, for example, in the Prinsejagt district, is a project for the elderly in which, from the beginning, the wishes of the future residents were taken into account. Architect Paul Bouw designed houses with them. On the ground floor, they have a direct view from the living room onto a private terrace, there’s a spacious bathroom, and a sloping roof, creating storage space. There are 3 courtyards, each with 12 houses. In July 2016, the first residents moved in.

Josje van Gestel – Nogueira Sargento is one of those residents; she still lived in the old houses on Gerretsonlaan. “There was a lot of emotional value for me and I really wanted to come back there”, says the occupant. She lived there for 15 years together with her wife, who died there. “Woonbedrijf has helped me a lot and I was one of the first to choose a new home.”

“The pleasure of living is above expectations. And you know each other from the very beginning, not everyone was there from the beginning, but others who joined later also thought about how it should be.” The residents went on excursions to other projects with each other and the architect, Paul Bouw, worked out the size, layout, and location of the houses in three sessions together with residents. He used maps and blocks. This was how the idea arose for the courtyards.

Lucas Zoutendijk and Eveline Visser from Studio 1:1 invented of the ‘greener grass game’, that was used as a tool to help the residents to think and decide on the layout of the courtyards. Studio 1:1 already collaborated with Woonbedrijf from another project to give the city more green space. At the same time, the Gerretsonlaan was built and there were drawings of the three courtyards, says Zoutendijk. “These drawings were quite austere and there was little greenery. The housing corporation asked us if we could think of something to improve this.” After an explanation about biodiversity and what that meant for their courtyards, residents started to negotiate with each other about the arrival of a bench or fitness machine and received ‘biodiversity points’ for the plants and grass. “The benches were expensive”, says Van Gestel – Nogueira Sargento, laughing. “And a week later we found them on sale at the Praxis!” Zoutendijk: “It’s of course very fun and social, such a game, but it had to stay within the budget. But we managed, and it has had many positive side effects.”

Another very different target group are the students from the Aurora flats on TU/e campus. “Many international students do not all ‘land’ equally well in Eindhoven”, says Van den Bremen. “They stay a lot on the Campus and are busy with their research or study, they find it difficult to connect with social life. Surveys and standard meetings did not help and therefore designer Almar Sinte Maartensdijk was asked to think up something that would work better. “Vestide was busy developing Aurora. The TU/e campus still had Space boxes, small prefabricated houses without a communal space. We wanted to know from the Spacebox residents what it is like to live on the campus. I designed a cart with two microwave ovens, which I placed outside the Spaceboxes, beautifully lit. The students came home from around 5 o’clock in the evening. And together with Auke van de Kerkhof (creative therapist), I offered them a bite of warm food and we talked to them about what they would like. That worked very well there, everyone came home at the same time, there was a queue and people started talking to each other.”

In the end, a meeting space of 90 square meters was created in the new Aurora complex, which Sinte Maartensdijk and the residents set up together. Large lego blocks were used to determine the layout, wooden tables were used to make games with wood burners, and light boxes were provided with stencils to create a better atmosphere. The residents did the decoration themselves. The designer discovered that it works well if you offer the students something restful to do. “These students are all very busy. They need everything for their study and research. But with this wood burning activity, some people stayed half an evening. We really had to send people home.” During DDW, visitors can also burn shapes in a wooden table. 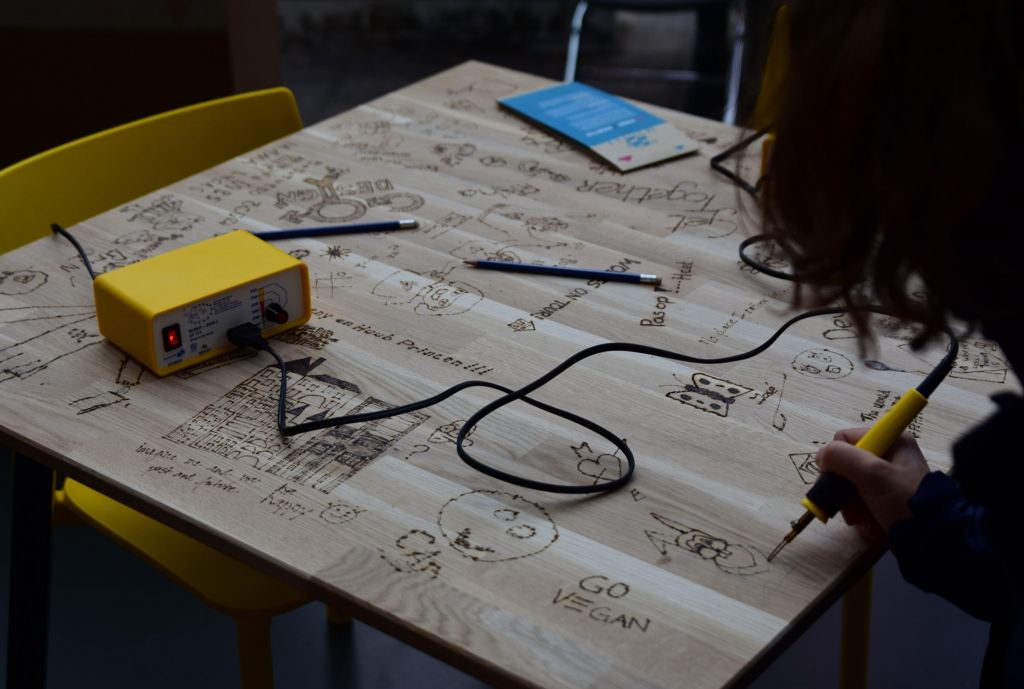 The ultimate example of co-design is the SPACE-S, for which Bellemakers was responsible at Woonbedrijf. There, 402 homes were built, and the residents were involved as co-clients from point zero. They were given the opportunity to determine the outside space, the dwellings and the design of the buildings together even before there was even one line on paper. Those who were most involved received “Mats Points” (Matspunten), named after the 500th member of the Facebook page. A whole community was formed and everything was organized. A city campsite was erected on the fallow ground, which became such a success that it was repeated three times. A resident, Tim van der Grinten, converted the architect’s design model into a game software, so everyone could take a 3D tour of how it would become. Occupant Joep Klunhaar received the most Matspunten, 62. He had a lot of time left, he tells us. And if it were to generate money, he would turn it into a job. “It is about participation, but yes, it also takes a lot of time. It does produce a lot, but that is not easy to express in monetary terms.” He did get the privilege to choose a house as the first occupant. Looking out of his window now and thinking back to what they have all done to design it in this way, he says, it does something with him, all those memories. “And the city campsite was the most intimate moment in the whole process. You get to know each other quite well.”