The Entangled Body by Polymorf

How would you feel if someone told you that you could tangibly interact with your emotional state of mind? That you could touch an object constructed from your present emotional status? That your emotions could create a ghost-like object out of thin air with which you could interact and explore your own consciousness? Thе case in point is nothing related to sci-fi, as some might think, but The Entangled Body – a new art installation through which the visitors at STRP Biennale 2017 Eindhoven will have the opportunity to interact with their consciousness.

What is the Entangled Body?

The Entangled Body is an interactive installation, made by the Dutch design collective Polymorf, which creates a second body, constructed from the visitor’s brain activity, “a mirror of one’s emotional self, going beyond the limits of one’s physical body”, as Marcel van Brakel, one of the members of Polymorf, described it. The Entangled Body makes it possible for people to interact with their emotions which take the form of an external object. This external object responds and changes its shape and texture in accordance with the brain activity of the individual.

What happens in the Entangled Body is “really strange but also fun” as Marcel put it and he compares the experience to making ghost material out of air. When a person enters the cube (see photo above) the interior lights up and gives signals to the person that the process has begun or ended. At the same time the exterior of the cube shows the person’s brain activity – for example, if the left side of the cube starts flickering, this means the person is having more activity in the left side of their brain: “It gives a real basic feedback of the process inside”, Marcel furthered.

The person’s brain signals are interpreted by means of a brain computer interface (BCI) and EEG technology and then connected to certain expressions – for example, if the person is being very curious or very focused, this will trigger a computer-generated object which can move and adapt to the changes in the emotional state of the person. “Then if the person changes their emotions in the process of touching the object, this will correspondingly change the shape and the texture of the object”, Marcel clarified.

“The person can touch their emotions which float around the cube.”

The interaction is only at the level of hearing and touching, the object stays invisible to the person. The person can use their fingertips and palms of the hands to touch their emotions which float around the cube.

“I am a designer and a filmmaker so I am very visual, but we never think about the other senses and how we can use them. Touch is like taste and smell, we totally rely on it! For example, what do babies do? They touch all the stuff to figure out what is out there. The tactile is really important, you can use the information you get from touching stuff to create much more powerful experience”, Marcel elaborated.

Why you should see The Entangled Body Installation

“It’s really interesting and it also raises important philosophical questions. For example, if I share my dream with you and you have downloaded my dream – is it yours or is it mine? If I give you such information, you can steal it and how will this affect me? The Entangled Body already plays with some of these questions and shows that people are not in total control of their bodies. It also shows that a person cannot be sure if this reality is there until the moment they interact with it. And even when they interact with it, they have limitations of their sensory system”, Marcel said.

Polymorf has two more installations at the STRP Biennale 2017: Famous Deaths where visitors can experience the death of Lady Diana and Whitney Houston only by means of scents and sounds, and Thermocorpus – a system that creates heat sensations on a person’s body in a pixelated way and makes an animation through that. All three installations are part of Synaptic Theatre – a long-term research project by Polymorf which studies how new experiences and emotions can be created by directly stimulating and controlling the brain.

“We are artists, we want to tell stories – that’s why we want to create something cool like The Entangled Body which can trigger your imagination and thoughts”, Marcel summed up. 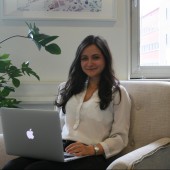