They act as solar panels but have come in the shape of a thin black film that is processed on the facades of the building. The solar research company Solliance, based at the High Tech Campus Eindhoven, has therefore played an important role in making the new apartments of ‘Thuis at de Willem de Zwijgerweg in Best more sustainable. The two buildings, De Zwijger and De Willem, are also energy-neutral in a different way. “‘Apartments with ‘Zero on the meter‘, five storeys high: it can be done”, Brabant deputy Anne-Marie Spierings said yesterday.

The new building will be completed in the summer.

Using the Energy Performance Compensation (EPV), the shell of the houses is insulated as much as possible. The amount of electrical energy needed for this is generated with the latest generation of film panels from Solliance. The buildings become ‘power plants’. The matte black panels with stainless steel profiles on the building will generate enough energy for daily use. This involves energy for heat in the homes, water heating and electricity for household appliances. In a NOM house (“Nul-Op-de-Meter”), the energy meter at the end of the year is, in principle, at the same level as at the beginning of the year. The total energy consumption is then equal to the supply of energy by the solar panels. However, this does not mean that the resident no longer has an energy bill.

The occupant pays a fee to ‘Thuis for the use of the energy-efficient installations and the rental of the solar panels. In addition, the resident has a contract with an energy supplier of their choice for connection to the energy network. This is necessary because energy generation and consumption do not take place at the same time. If someone uses more than the average consumption of a household, then extra energy has to be purchased.

The complex will consist of 40 houses of 70 m2 and 8 houses of 50 m2 including communal area and elevator. The design is by NB Architecten from Best. They have specific knowledge about PV panels and the technology behind them. 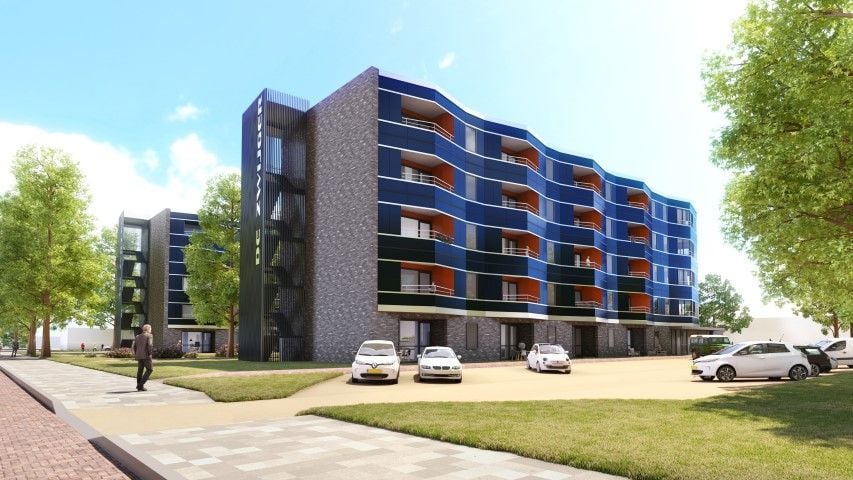