After three days of mostly school visits, today, Saturday 3 April, the first truly large audience was expected. Fortunately, we were not disappointed. Before it was even 10 o’clock, the parking lot was already filling up. Once they were in the Evoluon, the visitors were instantly greeted by the different musicrobots; everybody truly seemed to to like both Kolja Kugler’s One Love Machine Band and Team DARE. 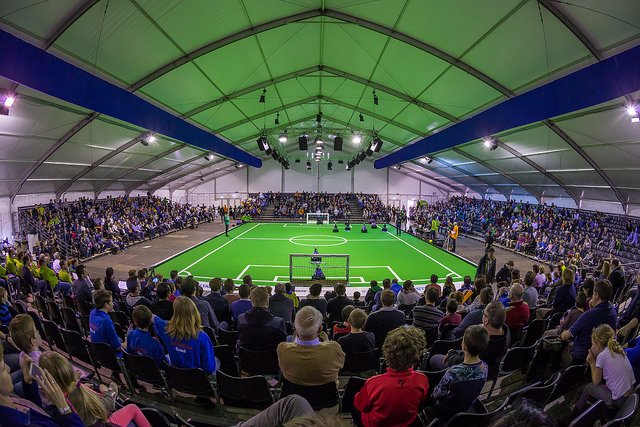 A little farther into the Evoluon, people were nog disappointed as well. In the @Home League, the robots were already walking through the hallways early in the morning, for the Follow & Guide challenge. For this challenge, the robots have to blend into the crowd, and either follow or guide persons. This results in scenes that are fantastisc to watch. In the afternoon, in the same @Home League, the restaurant challenge was held. Especially for this, the robots moved to the restaurant in the Evoluon, where they had to complete several tasks that are related to serving in restaurants. How long will it take before a robot will make a better cappuccino than a human? Tomorrow, Saturday 3 April, the @Home League final will be played, at 12 o’clock to be exact. 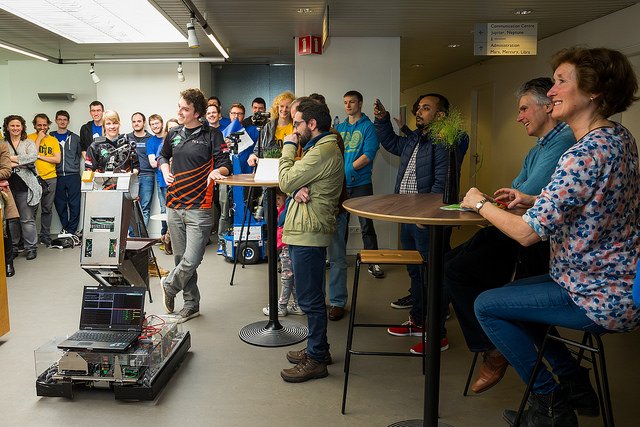 Just behind the restaurant, in the Standard Platform League, it was incredibly busy as well. Everyone wanted to see the funny Nao robots that are waddling around the field, and falling over every now and then. Nevertheless, many goals have been scored today; the double digits have been on the scoreboard more than once. The fact that the quarter finals have been played today, means that it is known what teams will be in the semi-finals tomorrow. Tomorrow (Saturday), Berlin United will play against B-Human, and the Nao Devils will compete against Nao Team HTWK, to secure a place in the final match. This finals will be played at 2 p.m. 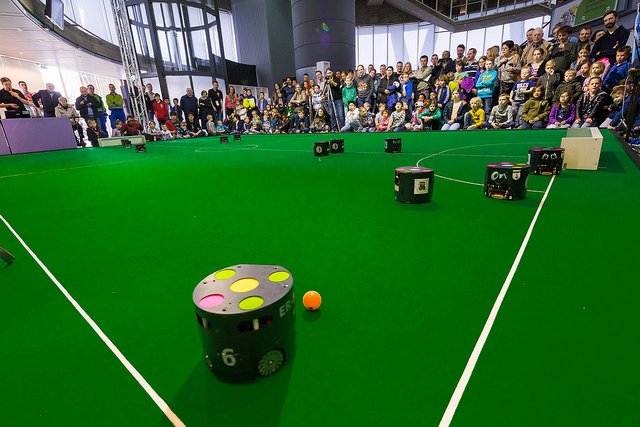 In the SSL, the battle for the places in the final match has already been decided, and it is known who can compete for the gold medal. Tomorrow at 1 p.m., ER-Forcea and TIGERS Mannheim will line up to determine who will be the champion in the Small Size League. The fourth of the four Senior League is the Middle Size League. Yesterday, it was already determined that Tech United, CAMBADA and Corpe Noctem are in the semi-finals, and today it has become clear what team has grabbed the fourth spot. The battle for this spot was fought between the ASML Falcons and VDL Robot Sports. The final match of the day, that attracted a lot of participants, ended with 4-1. With this result, the ASML Falcons have qualified for the semi final, where they will meet Tech United tomorrow morning. Nevertheless, there were also happy faces at VDL Robot Sports, because today they scored their first official goal this tournament. This big final match will be played at 3 p.m., in the tent alongside the dome. 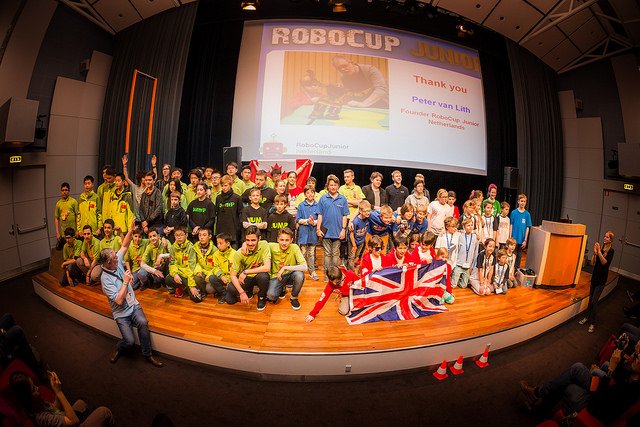 For this large MSL final, we have invited multiple special guests. The highlight will be the kick-off, which will be done by PSV player Davy Pröpper, at 3 p.m. sharp. Here, he will be on the field together with robot soccer players. How amazing is that! Furthermore, Lieven Scheire will be present during the final as well. He will give live commentary during the match, so that everybody understands what is happening on the field, and to ensure that everyone has a good time, ofcourse. Another thing that is very special, is that there will be a wheelchair hockey match tomorrow, on the MSL field, just before the final. This match will probably start at 2.15 p.m. When you combine everything, it sure promises to be an amazing day once again.

Whereas the Senior competitions end tomorrow, the European Championship RoboCup Junior has already ended today. After a great tournament, the prizes have been granted this afternoon. We can only conclude that everyone has built amazing robots, and that all teams have worked incredibly hard to get the best results. It was fantastic! The award ceremony of the Senior competitions takes places tomorrow around 4 p.m., directly after the MSL final. There is plenty to see tomorrow! Even in the rare case that there might be nothing to seeon the fields, there are always the many fun and interesting workshops and demos that dan be visited, like the Physics circus and a lecture by Maarten Steinbuch, especially for children.