Nowadays the world of the youth is surrounded by technology, it’s just there. They grow up in it, they intuitively learn to use a tablet or smartphone and apps are very normal. “That is what we focus on in our workshops: playfully learning how to deal with the latest developments”, Maurice Schmitz says. He organizes Night of the Nerds and is involved from the very beginning. “Eight years ago, we accidentally discovered that young people feel great enthusiasm for deviant and surprising applications of technology and that is still the core of everything we organize.”

“Young people think that’s great. Just because it is their world and they move easily in it. It is all new and that makes them happy and curious. The best feedback we receive is that they usually cannot name what they specifically have seen or done and then say ‘I want to do this when I am older’.”

Night of the Nerds is an annual event during the Dutch Technology Week. Held in the Klokgebouw and intended for young people between 14 and 19 years old. In two of the three halls, there are ‘experiences’ and visitors can immerse themselves in the interface between technology, creativity and art, Schmitz says. The third hall is equipped with rows of tables with laptops on them, divided into ‘thinking areas’. There are plenty of workshops which you can attend to and with seven of those workshops, it is wise to register in advance. “It will go on all day long, one after the other will sit behind those tables.” With as little explanation as possible, you get to work.

“The funny thing is when you ask them what they did the last hour, they say they have made a cool music track but in fact they have been programming”Maurice Schmitz, Organizer Night of the Nerds 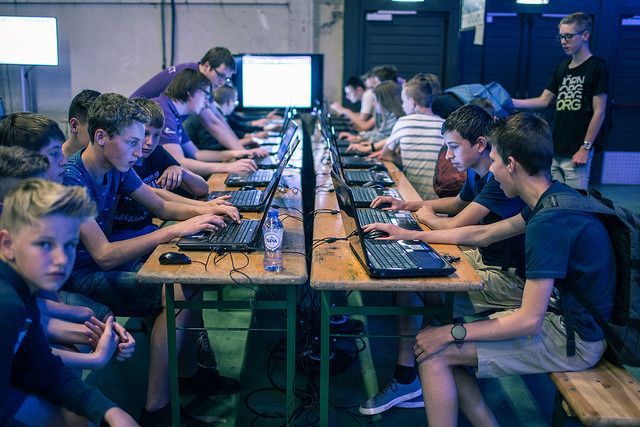 This year there are six workshops which are about programming. One is combined with music and another with art. “Because we do agree that programming is actually a kind of language that you have to master in order to be able to understand things in the future.” Sitting behind the laptop, using headphones, learning how to copy a dance or hip-hop track. To do this, you drag and drop pieces of code into the screen. A code can be six digits and three capital letters, which sounds like a piece from ‘Levels’ by Avicii. But too slowly and by taking out a letter or number, the track will go faster. The sound can be made heavier, higher or lower according to your taste. “It is very intuitive and the funny thing is when you ask the participants what they did the last hour they all say that they have made a cool music track but in fact, they have been programming.” With art, they do the same thing. Recognizable pieces from the visual arts, like Mondriaan, you build with codes.

Other workshops have to do with data. There is an observation workshop, ‘Get into the skin of an algorithm’. You create a profile by putting characteristics of people who walk around during Night of the Nerds in a list. Like someone walking around with glasses is someone who sees badly, or you see someone wearing shoes which were in fashion three years ago, may have no money for new ones. “That is actually how an algorithm works and that profile you will test on reality. Is that what you think is true, really true. That is a real ‘o yes’ experience.”

Throughout the year Schmitz is looking for interesting combinations for the Night of the Nerds. Every year he visits the final exam presentations of all Technical Universities, art academies and creative MBOs. He also works with companies from the creative industry which work with VR and augmented reality and data visualization. And with the tech companies like ASML and VDL. “We also give assignments to artists to do something with, for example, artificial intelligence. We tell them: ‘This is the latest state of the art, just do something surprising with it.’ That almost always delivers something that really excites young people.”

“It’s always about what is going on now or is about to come. We think it is important to be at the forefront of developments. By not making it heavy – it always has a kind of light-footedness – we present things in a funny and different way like in a game or workshop. That is what makes it fun. And the great thing is that the makers get immediate feedback: a young person simply says what he or she thinks or just walks by.”

After the DTW they will evaluate the workshops: what went well, what did the students like, what did they use? They are thinking of offering the workshops, or a part of them, to secondary schools the next school year, through the new platform: CreativeTechAcademy.