During the Dutch Design Week, special NS compartments are coming to Eindhoven again. Several designers decorate train units, to make visitors travel to DDW in style. One of the design studios playing a part in this is Enrichers. Govert Flint talks about the products they will show and the collaboration with the NS.

“Last year we participated in the What if Lab: NS, but unfortunately, we didn’t win. After that, we reached out to the NS again, because we thought our products would align their ambition. In January, we invited them into our showroom. There was immediately a lot of interest, they wanted to have our products. Then we started designing our products, together with the NS, for the purpose of their user research. This will take place during the Dutch Design Week (DDW).”

Movement on the train
The products Enrichers is going to show on the train are Floatiles, a Bambata water pillow, and the Macarons. All these products are made to sit and stand on and to keep moving while you do so. “We’re working from neurology. We look at the functioning of the brain and which stimulants it needs to function best, evolutionary. One of those stimulants is movement. That is an element which occurs relatively little in our daily surroundings. That’s because nowadays, we do everything sitting down. If people are already sitting down, can’t we bring more movement into it, so that you can, for instance, do a sweatless workout while you’re traveling to work or so that you can feel the movements of the train better? The products all have movement in them, so we thought it would be fun to make an experience out of the movement of the train and being on the train together. The question really is whether people like it or not.”

“My hope is that in all places where you are daily, exercise will be offered. The train is part of this for a very large part of the Dutch population.”Govert Flint, Enrichers

The products
“The Floatile was designed for an office environment. As an alternative to sitting down, you see more and more people working standing up. But everyone who has ever been standing up for a long time knows it isn’t very pleasant. If you’re standing on the Floatile, you have to keep moving.
We’re making a water sofa out of the lounge sofa in the new trains. As soon as someone sits down next to you, you can feel it. This reduces the threshold for a conversation.
The Macarons are pillows on which you keep moving. The pillow wobbles, so that you have to keep moving constantly to stay balanced.
During the DDW, we will see how people react to our products on the train. My hope is that one day you will have places to move on the train and that cars will get more dynamic chairs. That you have moving chairs at work. That movement will be offered in all places you’re daily at. For a large part of the Dutch population, the train is part of that.” 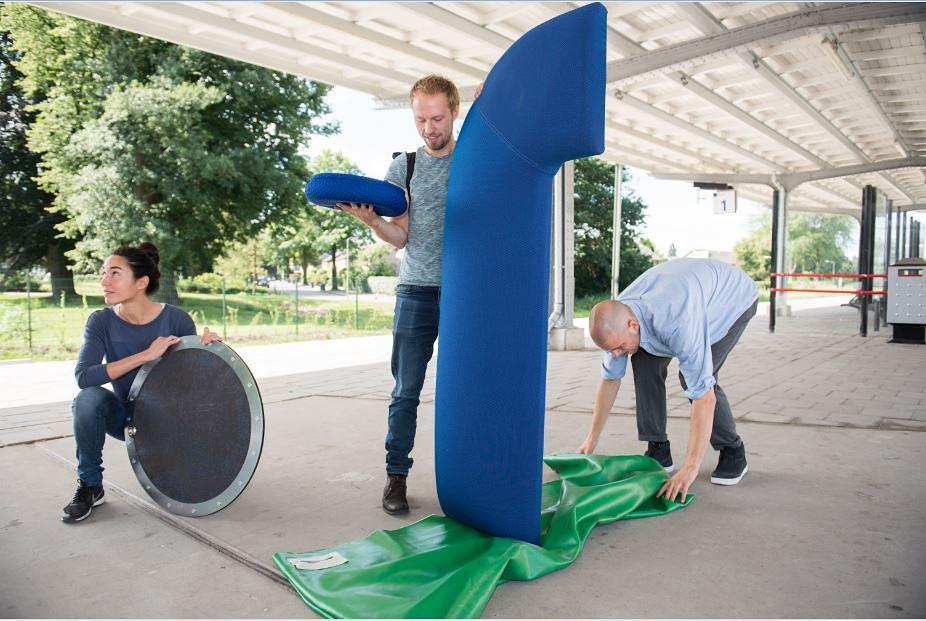 Exercise is happiness
“For my graduation at the Design Academy, I did research after moving and happiness. That way I found out that there is a direct relationship between how your body distributes energy and which emotions it feels. Full body movement correlates with happiness. If your whole body is active, it gives a sense of happiness. Based on that, I started looking at how that looks when you make it functional, so when you see body movement as a functional action. So for my graduation, I have made an exo skeleton to control a computer with your whole body. After that, we as a studio started looking at how you could simplify this complex mechanism into something you can use straight away. That’s when the wobbling pillows, water tiles, and water sofa were created.”

Enrichers
“Our goal as design studio is to create environments in which five brain areas are activated to a greater or lesser extent. Our hypothesis thereby is: If those brain areas are activated every day, you have more resistance, you get older and you recover from illness more quickly.”
Enrichers translates the five brain areas to five themes in which they work, under the name ‘Environmental Enrichment’: Motor, Somatosensory, Cognitive, Visual, and Circadian rhythms.“It took us very long to simplify this. You start with an exoskeleton and end up with a pillow. It takes a lot of time and effort to come to something as simple as a pillow.”