At Innovation Origins you are used to receiving the latest news about all kinds of technological innovations, discoveries and successful startups, especially in Europe. Macroeconomic forecasts tend to play a less important role.

Nevertheless, economic conditions in a country, region or city are of course important for the future. Cities with leading universities and many wealthy large companies have better opportunities than cities that do not. Countries with low debts have more opportunity to invest in R&D than countries with high debts. And regions with good infrastructure and plenty of highly educated young people always offer an advantage to investors.

These kinds of preconditions are of immense importance especially in times when the economy is at a crossroads. Germany is in a position to comment on this more than any other country. For example, during the 2009 credit crisis, few other countries fell into as deep a recession as the Germans did. The economy shrank by 5.6% in 2009, whereas the Netherlands lost 3.9% of its GDP. All regions shared this malaise.

But a year later, the sentiment had quickly reversed. There was even talk of a new economic miracle. The crisis was forgotten almost as soon as it arrived, particularly in regions with strong economic structures such as Bavaria and Baden Württemberg.

Once again we seem to be at a (negative) turning-point. Look at Basf, Daimler and Lufthansa, for example, who recently issued hefty profit warnings. Ford, Opel, Thyssen-Krupp, Siemens and Deutsche Bank are preparing their staff for mass redundancies. And the entire automotive and machinery industry is suffering from declining sales in China. It is not for nothing that economists are talking more often about a new recession.

Yet for the optimists among us, this is also a perfect time to grab a map and see where the best opportunities will lie when the economy picks up again. Where are the innovative companies? Where are the universities? Where is the money? Where are the qualified people?

Each year, the German Ministry of the Interior draws up a ‘Deutschlandatlas’ (Atlas of Germany), which identifies the structurally strongest and weakest regions on the basis of numerous criteria. For many years, the picture has for the main part been the same. Southern Germany is strong, especially around the cities of Stuttgart and Munich. The East is weak, with a few small exceptions around cities like Berlin, Dresden and Leipzig. And in the West, there are major differences within a relatively short distance of each other with. On the one hand, thriving cities such as Düsseldorf and Cologne, and on the other, cities which have been almost written-off, like Essen and Duisburg. That image is reflected in the atlas.

For instance, consider this map on the unemployment rate: 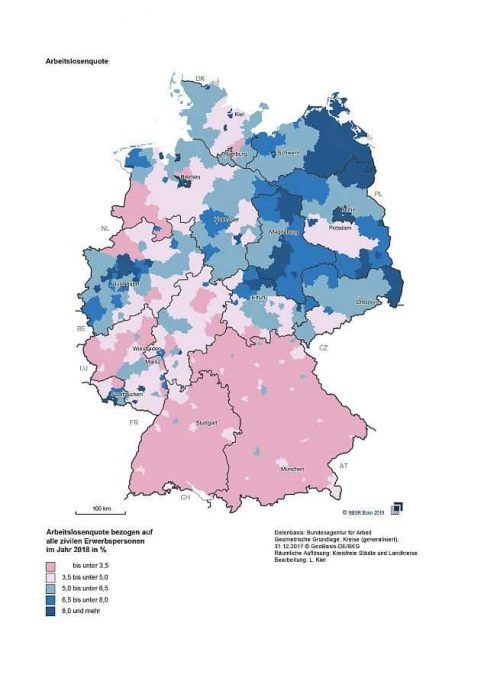 Or the regional contribution to the national income per capita: 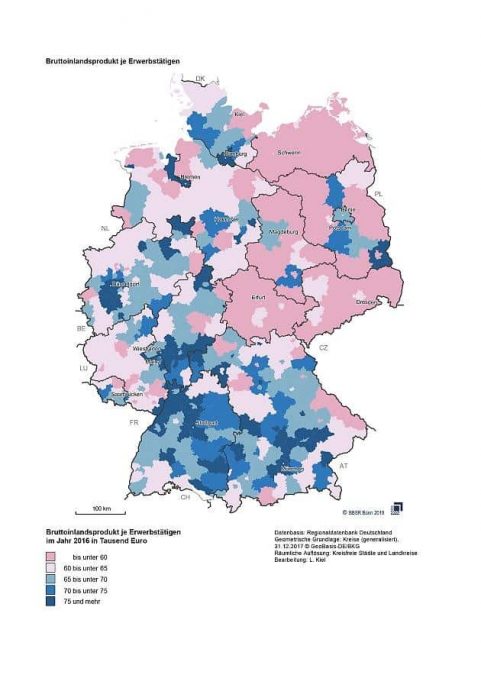 Or the ageing demographic per region: 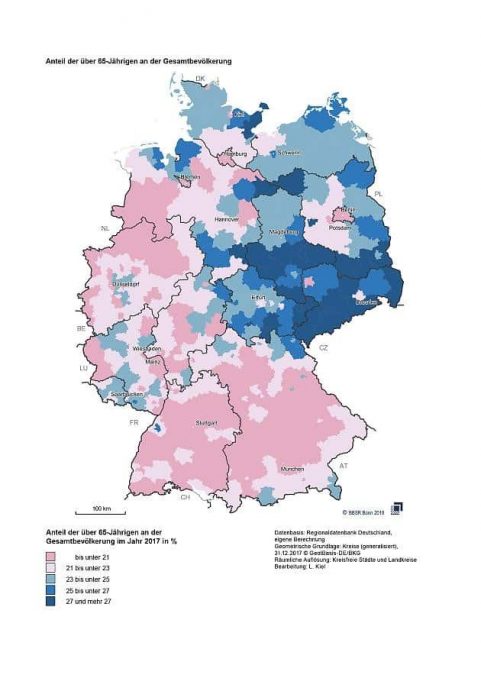 The disadvantage of the German atlas, which was published this week anew, is that it does not give an overall representation. It is comprised of a lot of individual maps. Another atlas published last weekend provides a little more reassurance in this respect. This is the Zukunftsatlas by Prognos.

Prognos relies on slightly fewer indicators (29 ), all of which are important for the future sustainability of 401 ‘Landkreise’ (municipalities) and ‘Kreisfreie Städte’ (larger cities). The atlas is produced every three years.

Click here for the 2019 interactive Zukunftsatlas from Prognos (in German)

“In previous editions of the atlas the maximum difference between the number one (now Munich) and the last number (now Stendhal) was 32 points. This year it’s down to 29 points,” said CEO Christian Böllhof in a presentation to the German newspaper Handelsblatt..

Böllhof refers to “trickle-down effects”. The best example is Teltow-Fläming, a region just south of Berlin, which climbed 115 places to the 170th position between 2016 and 2019. Berlin is thereby demonstrating more and more its potential as an economic center with a wider impact on the surrounding areas. A role that it also had at the beginning of the last century, when Berlin and the Ruhr region were the economic mainstays in Germany.

Nevertheless, according to the map, there are still many things that could be done better in Berlin. With its 93rd place, the capital city still has to let other cities pass it by, like Munich (1), Ingolstadt (3), Darmstadt (4), Stuttgart (5), Wolfsburg (9) and Frankfurt (10), which are all way ahead. The capital is lagging miles behind, especially in terms of prosperity for its residents. At the same time, for the last 15 years Berlin has been the fourth largest climber in the Prognos ranking. Leipzig is actually the highest climber since 2004.

Unfortunately for the Netherlands, most of the top locations are far away from our border, with a few exceptions such as Düsseldorf, which landed at number 12, Hamburg, at number 21, Münster (25) and Cologne (26). The municipality of Aurich which is on the border close to Groningen, is one of the least future-proof regions of Germany as number 340. This is mainly due to its ageing population and weak employment market.