The benefits and necessity of removing microplastic particles from the world’s oceans and ashore has spurred many scientific researchers towards finding the ultimate solution. Yet few have come up with such revolutionary ideas as that of the 18-year-old Irish Fionn Ferreira. He successfully tested his idea of using ferrofluids to suck up microplastics in water. Ferreira won the first prize and the associated $50,000 at the annual Google Science Fair.

His invention was definitely noticed in the range of innovative submissions from young people between the ages of 13 and 18. The competition for the most innovative idea has been running for eight years. Ferreira first presented his research results only after he had started his research in 2017 – and his more than 950 tests to see if his invention would work. He spent those years in his own home laboratory researching whether ferrofluids (consisting of vegetable oils and rust powder) could provide the means for removing fine plastic particles from water with the help of a magnet.

“The process is actually very simple,” he tells Innovation Origins when asked. “When microplastics in water come into contact with ferrofluids, the ferrofluids attract the plastic particles and these particles remain attached to these fluids. They can then be removed from the water with a magnet. I did my research based on the hypothesis that my application would be 85% successful. I did this on the basis of visual observations of the attraction process when these occur with ferrofluids and a magnet. I was expecting that no more than that particular percentage could be successfully removed, but that turned out to be a few percent more for the microplastics.” 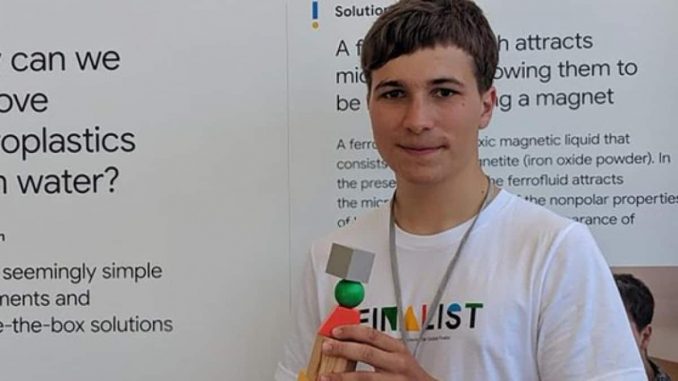 Apparently Ferreira considers his award and other expressions of appreciation for his various research projects as types of peer reviews. On Boyan Slat’s The Ocean Clean Up method and his employees, he just points out that everyone needs to develop their own methodology in order to tackle the problem of microplastics pollution. Ferreira: “My method is just different from others and can be implemented in a variety of circumstances. I think that there are opportunities for all solutions, and that all research in this area is good for humankind.”

It is clear that the focus should not be directed toward the sole researcher who may offer the ultimate solution for cleaning up microplastics. Research shows that approximately 5,000 tons of plastics are released into the environment every year. An alarming 91 percent of these cannot be recycled. Most of this ends up on land and in the oceans.

The World Economic Forum has examined the source of microplastics which must be removed from the oceans. The conclusion was that at least 90 percent comes from ten river systems, of which eight are in Asia; namely the Yangtze; Indus; Yellow; Hai He; Ganges; Pearl; Amur; and the Mekong. The Nile and the Niger in Africa round up the figure to ten. Hundreds of millions of people live along these river courses, most of whom do not have access to modern waste disposal facilities.

The young researcher Ferreira is proud that he is able to contribute to solving a large-scale problem with his research work and that this work has been noticed. He wants to use his money prize for financing his own research projects and for further studies. He intends to do this at the University of Groningen. Why? “I would like to gain new experiences and learn a new language. The Netherlands has good ethics when it comes to the environment. Dutch universities are mainly responsible for making a major contribution to this.”