With 3D printing, we often think about plastic. However, at the Technical University of Eindhoven, a huge printer is already printing concrete. As easy as we make a copy, as easy the TU/e seems to print a new bike bridge. BAM is placing the bridge in September in the Noord-Om of Gemert. With this, Eindhoven makes the world’s first 3D printed bridge of reinforced concrete. Talk about no bridge too far.

Marinus Schimmel, director of BAM gets very excited about the project. “We have a world first here. The bike bridge may be a small project, but look at the plane of the Wright brothers. It only flew thirty meters, it’s just a small thing, but it is the first step.” The new possibility to print concrete has advantages on several areas. “With 3D printing, you have more flexibility in the shape of the product. Besides, printing a bridge is also an incredibly efficient way of working. You need less concrete, but you don’t need formwork either, in which the concrete is usually poured. You only make exactly what you need. And everything you don’t make also doesn’t give CO2 emissions.” Besides printing concrete being more efficient and sustainable, it is also faster than the traditional construction. “You need much less people for it, basically, only one person has to keep an eye on the machine. If you print a bike bridge like this, it only takes about sixteen to twenty hours,” says Johan Bolhuis, design manager at BAM.

“We once started with a piece of plastic in 3D printing and now we have a bridge.”Marinus Schimmel, Director BAM 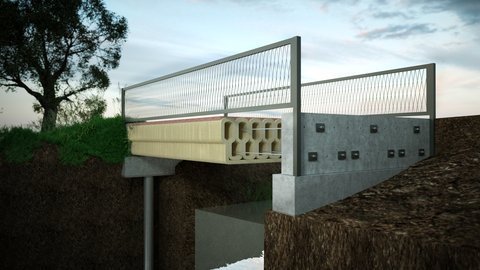 Bolhuis realizes that the municipality is also a major link in realizing the bridge. “It’s nice that the municipality makes something like this possible. For example, they adjust the concrete standards for us. Because with printing, we work with a different type of concrete. Gravel concrete is usually being used, which is a bit stronger than the mortar we are using. The advantage of mortar is that it dries faster, which is practical with printing. What we do is off the beaten track so there aren’t any requirements yet, because it has never been done before. The municipality gives us the space to deviate from those standards and requirements.” Because of the new way of working, the TU/e still has to do research. “We have to test everything ourselves to find out how it works. We are now doing all these tests at the TU/e, this knowledge is also helping the university. We also want to test at which point the bridge breaks. Then we also know what the defeat mechanism is,” says Bolhuis.

The different parties of the project all agree. 3D printing reinforced concrete is the beginning of the future. “Now everything at the TU is still happening with a large printer attached to a gantry. In the future, with bigger projects, dynamic robot printers get to work on the location itself,” Bolhuis concludes. Schimmel agrees with him. “This approach will become standard, it will replace pouring concrete. Now it is about making steps, a somewhat bigger bridge, a somewhat broader bridge and in the future all bridges will be made like this.”

Start-up Zavhy plans to turn construction world upside down…
Impulse printing has the potential to change microelectronic…
'Quit your job for one day a week'
Move to live: how Move to Be wants to get the country…
You shouldn't just ask for a grower, but just give Bart a…
'I hear too often that women have to be harder, more…