For the first time, both the soccer robots and the care robot of TU Eindhoven have become world champions. The robot football team Tech United won in the finals of Team Water from China; the care robot HERO also got the most points in its category. The RoboCup, which was in Sydney this year, is the annual international tournament for autonomous (self-directed) robots. 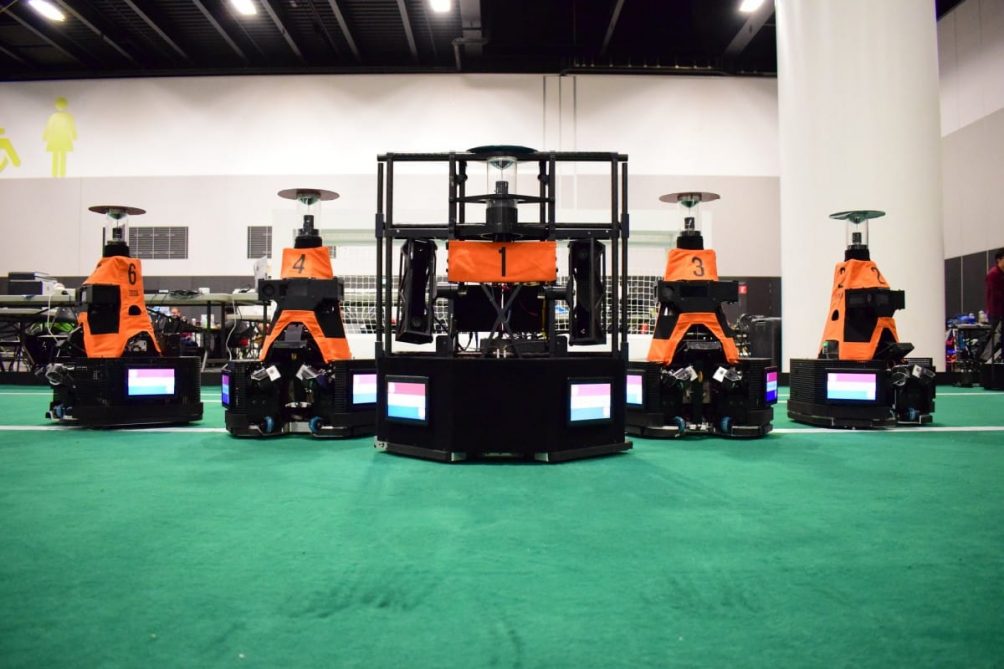 Tech United had made it through the preliminaries without any noteworthy cracks, but the final against Water from China was nerve-racking. It was only in the last minute of the race that Tech United made the equalizer with a shot from Lieke Motors. Also in the extra time, it remained exciting. Tech United did get a 5-4 lead due to an action by Dominique Bluetooth, but Lineth Rekenbrein only made the 6-4 a few moments before the end of the game. Team Water was strong in the attack and Tech United’s defence was put to the test several times. Vivianne Wielema was a surprising trump card within the Eindhoven team: it is a new kind of soccer robot with not three but eight wheels.

Tech United has also won a World Cup in the care robots category, with a good distance to the number two. This is the first time that the Eindhoven team is going home with two world cups.

During the football game, the students and researchers of the Eindhoven University of Technology have no contact with their robots: they play completely autonomously. Team captain Wouter Kuijpers: “The team has trained on various strategies for game rethinking such as throwing in and free kicks.” With a new piece of software, it is now possible to choose a strategy that is perfectly adapted to the opponent in question. In this way, a strategy could be used during the final, specially tailored to the Chinese rival Water, who had already met the Eindhoven team in the finals several times before. Both have won the championships several times.

Tech United also played in the Domestic Standard Platform League for care robots. In this category all teams use the same robot, a Toyota HSR, but each team uses its own software. The Eindhoven HSR is called HERO. The Eindhoven robot excels in its ‘world model’, the digital representation of the world. The robot makes a 3D map of the walls, places all kinds of digital objects such as cabinets and benches in it, and there is a special code that explains that it is more convenient, for example, to stand in front of a cabinet instead of next to it.

During the ‘challenges’, the robots received assignments from the messaging service Telegram, such as “Find Josja in the living room” and “Take out the garbage”. Such tasks may seem simple, but there are still many challenges for robots. Not only does it need to make a digital map of the space, but the robot also needs to understand the task well, be able to recognize objects such as benches and cans, and finally, he needs to devise optimal strategies for different tasks.

China 2022: Business under Dynamic Covid-zero Policy
On EU-China bilateral relations: Is there such a thing as…
Choosing a stance? Interpreting the geopolitical challenge…
The Digital Shiftings in Sino-Dutch Business Communication
Intercultural Dialogues between Dutch and Chinese…
Firefighting aircraft of the future are flexible, autonomous…
Manage Cookie Consent
We use cookies to optimize our website and our service. Help us to make our site better by accepting all cookies.
Manage options Manage services Manage vendors Read more about these purposes
View preferences
{title} {title} {title}