Last month a new movie came out, packed with celebrities and world class athletes. It drives home the message that a plant-based diet makes you healthier (manlier even) and allows you to compete on a higher level. Also, recent advances in plant-based meat substitutes and lab-grown meat suggest that we are able to enjoy the taste of meat, while skipping the inefficient step of growing and slaughtering an animal. So why don’t we invest in meat substitutes in the same way we invest in fossil fuel substitutes? I think we can be the generation that not only moves beyond burning fossil fuels, but also beyond eating animals. 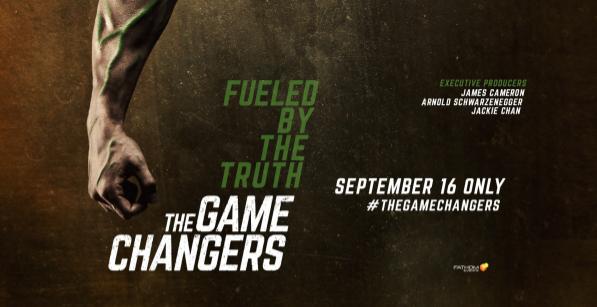 On September 16th, a movie debuted that was unthinkable ten years ago. It’s aptly called The Game Changers. In it, uber-alpha males like Arnold Schwarzenegger, navy seals, UFC fighters, strongmen and Olympic athletes tell us that we were lied to about meat in the same way that we were lied to about smoking. They argue that not only can you compete on a plant-based diet, it actually makes you stronger, more energetic and more virile (yes, they do measure the rigidity and duration of erections in the movie). As well as give you the ability to recover faster from injuries and reduce the chance of cancer and strokes. Award-winning producers, directors and editors made it into a pretty cool movie to watch. And the science is so good (with explicit references) that numerous educational institutions award you study points if you go see it. It’s arguably the most A-listed documentary ever, and it made me decide to go from 95% to 100% vegan. You can watch it on Vimeo for $4.99. And no, they’re not paying me for this endorsement.

Why do I bring this up?

Now you probably know me as a scientific expert on electric vehicles and energy system modelling. I’m not a medical doctor or dietician by any stretch of the imagination and I have a limited interest in healthy eating. So why do I bring this up? For me, the reasons to promote solar, wind and electric vehicles are remarkably similar to the reasons to promote a plant-based diet: I want to make this world a happier place. Primarily for humans. But for animals too.

Solar, wind and electric vehicles support the assurance that we can keep parts of our civilization that we like, while still reducing the environmental impact that’s threatening to end it. A plant-based diet does that too and it probably has an even bigger positive impact on the planet. Switching from plants to animals is very inefficient. We consequently need three quarters or our agricultural land for animals while they deliver less than one fifth of our calories. As the movie puts it: we could free up an area the size of Africa. That’s important because our conversion of forest to cropland is a major contributor to climate change and the cause of the sixth mass extinction we are currently in the middle of. Also, every steak has a total water usage of one million liters according to the movie.  Aquifer depletion is an urgent problem as well. If you look at it that way, farmers that produce meat don’t put food on the table, but they actually remove it. At least when you compare them to farmers who are growing plants that feed us humans directly.

One of the worst crimes

Apart from this ecological problem, we have an ethical problem. Many people admire the clarity with which Yuval Noah Harari wrote his book “Sapiens, A Brief History of Humankind.” On this topic he writes: “Industrial farming is one of the worst crimes in history: the fate of industrially farmed animals is one of the most pressing ethical questions of our time. Tens of billions of sentient beings, each with complex sensations and emotions, live and die on a production line.” Paul McCartney has said that if slaughterhouses where made of glass, everybody would be a vegetarian. He seems to have a point since draconian “Ag-gag” laws in the US pull out all the stops in order to stop whistle blowers from filming what goes on inside abattoirs. So, the movies are few and far between, but we are way beyond: “Wir haben es nicht gewust.” (‘We did not know.‘ – That dodgy denial so often voiced during the Nuremberg trials etc, ed.) Is that really the legacy we want to leave our children?

The UK prime minister Boris Johnson recently joked that everybody wants to stay away from “terrifying limbless chickens.” But this week a tweet from the Economist reminded me that we are already halfway there. We have created mutant chickens that explode into huge lumps of meat within just a few weeks. And did you know that chicken beaks are cut off in some facilities, otherwise the chickens hurt each other because they are so agitated? Can you imagine spending your entire miserable, brief life in a small prison cell with your teeth removed so you cannot even bite the other people in there with you who are freaking out? How is that normal? Also, we have bred a cow that has udders which almost touch the ground and we force her to get pregnant and give birth all the time. The we can take away each of her calves and drink the milk that she was producing for them. It’s a bit strange when you think of it that way, isn’t it? And lest we forget, we all feel disgust when we see YouTube movies of dogs being tortured and slaughtered for meat. But we happily eat tortured and slaughtered pigs. Did you know pigs are just as intelligent, playful and social as our dogs? My wife and I would actually love to adopt a pig. Just like Greta Thunberg, we love Esther the Wonderpig. But modern pigs eat a lot and since they are social animals you need at least a couple of them. So, we will make do with a few chickens and a few small sheep to keep the grass short and make our garden livelier. And no, we will not eat them. And yes, we will use the eggs and the wool.

Now some people will say: but we where made to eat meat! It’s part of our evolution! That’s why we need it! I would like to direct them to the movie or to the science: it’s simply not true. We are typical omnivores with far more adaptations for plant eating than for meat eating. Also, all the good stuff that we take from meat was already in the plants that we fed the animals. Yes, all of it. All those essential amino acids we can’t make come from plants. Even the vitamin B12 that vegans are told to supplement is not made by animals, but by bacteria in the soil. We don’t get enough B12 anymore because of soil degradation and because vegetables are cleaned too thoroughly these days. Moreover, many animals in the bio-industry receive a B12 supplement and that supplement is passed on to meat eaters.

Nevertheless, it is true that we took up meat eating around 2.6 million years ago. It never became our main food source. But since we were forced out of the jungle because of climate change and as plant-based food was scarcer on the savanna, we learned to supplement our diet with meat that big cats left for scavengers like us. It may have even helped us develop bigger brains. Inflammation and chronic diseases that are now linked to meat were no problem back then because our ancestors rarely got to be older than 40 years of age. Just like sugar, we learned to love meat because it is so energy intensive. Yet nowadays our situation is very different. We can easily get enough calories and we have ways to preprocess plants.

My proposal is to do the same with meat as what we are doing with energy. That is to discover and use alternatives that gives us what we enjoy but with far less downsides. I think it’s not a moral dilemma. We like meat, but we don’t like killing animals. Therefore, if we develop food that tastes just as good as meat but doesn’t involve killing animals, almost everyone would be fine with that, I think. Let’s face it: romantic notions regarding meat went out the window long ago. Deep down most consumers know factory farming is pretty awful. And there are plenty of alternatives. Apart from the fact that meat cravings become less if you eat less meat and ignore the marketing, plant-based substitutes are improving every year. In Holland we have the “Vegetarian Butcher” that was acquired by Unilever, Burger King has started selling the Impossible Burger in the US while McDonalds is testing the Beyond Meat burger in Canada. If you think plant-based will always somehow be different from the real deal, it might be good to know that Mark Postma is still working on lab-grown hamburgers and has already dropped the price from €200,000 to €9 per burger. He expects to be cheaper than a regular hamburger in 5 to 10 years and has already set his sights on cultured spareribs.

But compared to meat it is still a minuscule industry with minuscule budgets. I think the biggest company might be “Beyond Meat” with a revenue of $200 million. That’s a meat market share of 0.015%. Through talking to Mark Postma, I learned that government agencies won’t fund his work because it doesn’t fit into any regular category. What if the EU (+UK) and US invested a billion dollars each into R&D in order to get the ball rolling more quickly? What if we introduced €50 million X prizes for steak, milk and cheese substitutes? What if we introduced a meat and dairy tax based on actual real-world costs?

I honestly think we could transform farming within a decade. I think we will find that once we allow ourselves to think the unthinkable, replacing meat will be a lot easier than replacing fossil fuels. And I think it could make eating even more fun: bon appétit!

In a weekly column, written alternately by Floris Beemster, Bert Overlack, Mary Fiers, Peter de Kock, Eveline van Zeeland, Lucien Engelen, Tessie Hartjes, Jan Wouters, Katleen Gabriels en Auke Hoekstra, Innovation Origins tries to figure out what the future will look like. These columnists, occasionally joined by guest bloggers, are all working in their own way on solutions to the problems of our time. So that tomorrow is good. Here are all the previous articles.