In a weekly column, alternately written by Lucien Engelen, Mary Fiers, Maarten Steinbuch, Carlo van de Weijer, Tessie Hartjes, and Auke Hoekstra, E52 tries to find out what the future will look like. All six contributors – sometimes accompanied by guest bloggers – are working on solving the problems of our time. Everything to make Tomorrow Good. This Sunday, it‘s Auke Hoekstras turn. Here are all the previously published columns.

We are increasingly living in a world of exponential trends. Such trends are easy to devise and calculate, but difficult to believe. I realised that when, in 1990, I read a book by Ray Kurzweil (inspirer of Singularity University, among others) that predicted the rise of computers and the Internet. His method: analyse exponential growth. I thought it was so simple and logical that I immediately started calculating myself. Suddenly, the speed at which computers, the Internet, the Intranet and mobile phones was able to reach new heights became very predictable. But around me, disbelief reigned.

Now I’m working on predicting zero-emission applications in energy and mobility (as a researcher and director of my own company) and again: disbelief rules. Let me give you a clear example.

In order to generate our current energy needs (not only electricity but everything) worldwide with solar panels, we need around 500 billion of them. At the moment, we only have a meager 1 million. That is 0.02%.

Suppose we start with a factory that produces 1 solar panel per year. Suppose our factory produces 50% more each year. (This is approximately the average growth in solar panels over the past ten years). After two years we only produce two panels and after ten years we produce fifty panels a year. How many years will it then take us to produce the current 1 million solar panels? And how many years does it take to get from that 0.02% to 100%?

The answer: it takes 32 years to reach 0.02% and it also takes 32 years to get from there to 100%! So if we continue in this way, all our energy can come from solar panels in 2050! Unless you’re working with exponential trends, you probably wouldn’t have expected that to happen… It’s almost incredible, isn’t it?

Now, this is not a prediction, because other energy sources are available as well and a multitude of nuances are possible, but it does indicate that things can go fast. On the other hand, the following figure shows the International Energy Agency’s predictions about solar panels: they clearly do not yet believe in them. 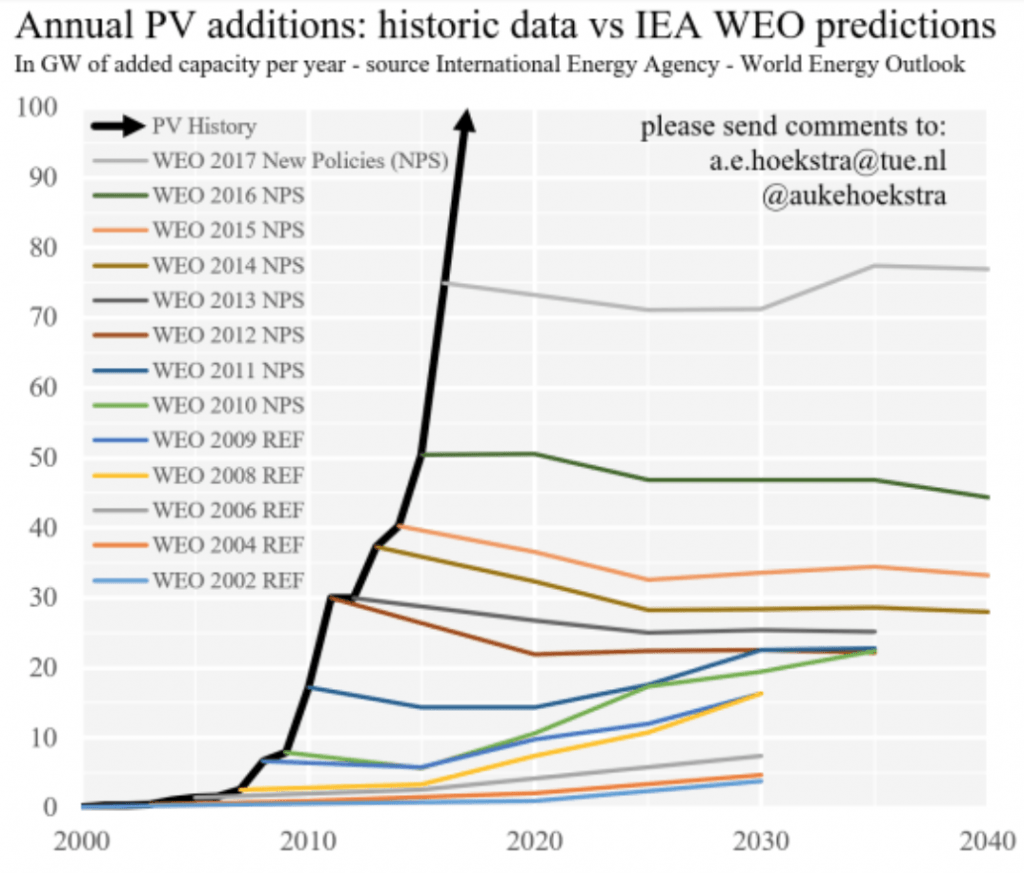 Sun is exponential because the main effort lies in thinking up the panels and the production processes. Once you’ve come up with something smart, things can develop fast and others can build further on it.

If you would simply have followed exponential trends blindly, you would often have predicted the future better than most experts in the past few years. At least in the field of solar panels, wind turbines, electric cars, batteries, hydrogen storage and autonomous driving. But of course, according to a researcher like me, that’s not enough as an explanation. That’s why I’m working on “agent-based” models that can take into account a multitude of factors as well as persistent practice.

Unfortunately, negative exponential developments can also go extremely fast. Is it still possible to slow down climate change? Will we soon be governed by Facebook or a malicious computer? Danger all around us!

It is, therefore, important to learn to believe in (and calculate with) exponential trends. When we learn that, and then make smart choices, it is indeed true: tomorrow is good.

Do you still get it? On how artificial intelligence is…
Solar stocks and solar flows
Electric Auke: 'We should all start smoking and driving a…
Between hope and possibility
The value of a good brainstorm and how to make it work next…
The grand plans model is on its last legs
Manage Cookie Consent
We use cookies to optimize our website and our service. Help us to make our site better by accepting all cookies.
Manage options Manage services Manage vendors Read more about these purposes
View preferences
{title} {title} {title}