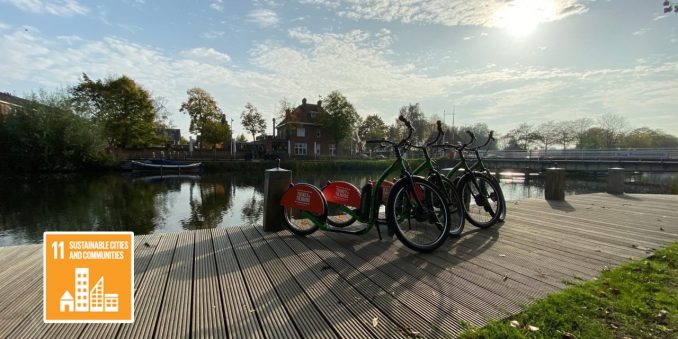 CityStep – E-scooters set to soar in The Netherlands

The four students from Breda at CityStep have proven that holidays can sometimes also be a time to reflect and be inspired. Sometimes you don’t even have to come up with something completely new for a good business plan. Instead, you can simply shift an existing idea from one place to another. The Brabanders were so enthusiastic about their e-scooter tour during a city trip to Valencia that they immediately thought: ‘We have to got to bring this to The Netherlands too’. But that was easier said than done, as ever since the Stint tragedy in 2018, electric bikes in the Netherlands have suffered from a bad image.

The National Transport Authority (Rijksdienst voor het Wegverkeer) has significantly tightened up the rules due to safety reasons, but this did not prevent CityStep from going ahead with their plans. During a networking get-together on a rooftop in Tilburg, they came into contact with a scooter manufacturer that meets these strict regulations. The first rental scooters in Tilburg are now available for hire. The transformation towards an e-scooter empire which encompasses the Netherlands should take place over the coming years. 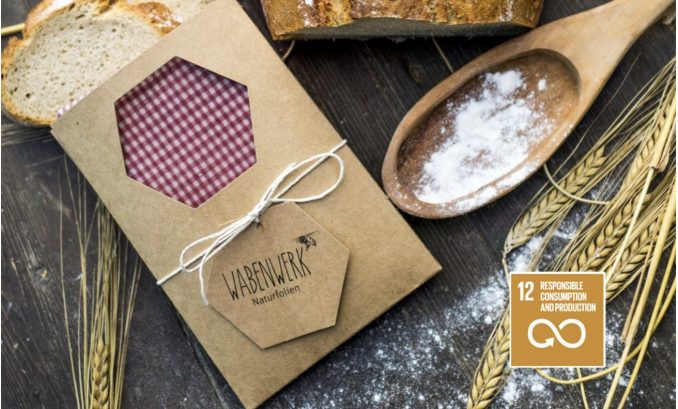 The invention of plastic in the twentieth century meant a real revolution in the packaging sector and in food preservation. Yet plastic is both a curse and a blessing. Mountains of disposable plastic pollute the oceans and the stuff is so tough that it takes nature hundreds of years to break it down. How wonderful would it be if you could have the versatility and advantages without the drawbacks? More and more governments are working on reducing dnon-recyclable plastic. There is even a complete ban in Costa Rica. However, an alternative is needed. The founders of Wabenwerk in Germany were inspired by Mother Nature herself.

Bees in their natural environment are also constantly working on sealing their larvae, pollen and honey in their hives. They do this with honeycombs that they make out of beeswax. Wabenwerk developed a cling foil made of this organic material so that plastic foil is no longer necessary. Bees play a very important role in the pollination of crops in nature. They fly from flower to flower and gather more pollen on their feet. Whenever things go bad for these insects, you can also see this reflected in the environment. Do the diligent six-legged honey makers still play an essential role when it comes to the livability of our planet? That may very well be the case! 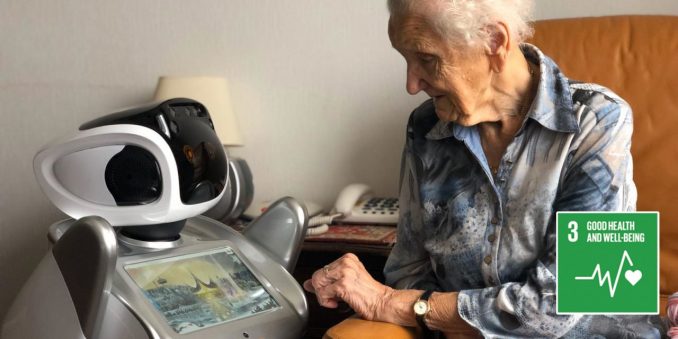 SARA – More mechanical hands on hand in homes for the elderly?

The workload within the elderly care sector is set to increase at an unprecedented rate over the coming years. In about ten years’ time, a relatively large group of elderly baby boomers will need a great deal of care. At the same time, there will be significant shortages in this sector. Nevertheless, there is a trend that more or less coincides with that of baby boomers who are in need of care. Namely, the rise of service robots. The Eindhoven-based company Bright Cape has designed SARA, which is a Social & Autonomous Robotic Health Assistant, SARA already carries out work in two Dutch senior citizens’ centers on the work floor. Ironically, this robot offers a modicum of humanity in times when every minute of care is supposed to be spent efficiently.

SARA is able to chat with chronically ill clients, play a number of interactive games with them and even has a program with made-to-measure physical exercises. This allows her human colleagues to spend more time on healthcare tasks. However, it is a bit odd that a robot like SARA is supposed to make sure that the human element comes back to the care for our senior citizens. Wouldn’t it be more logical to employ a robot nurse for the medical tasks and thereby give people more time for a cup of coffee or a chat about the weather? All the same, SARA is more than welcome! Clients and care staff are happy with this innovative nurse on wheels. She is a keeper for them in any event. 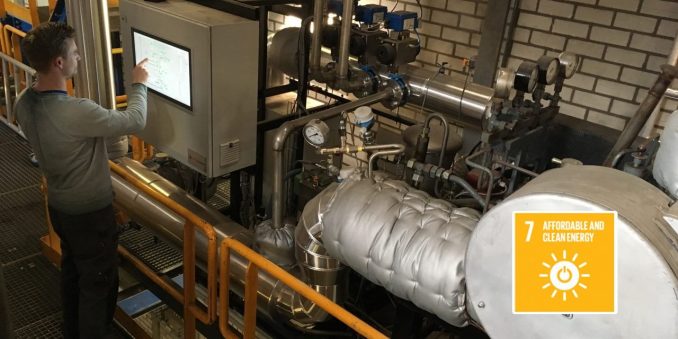 The first two decades of the 21st century were characterized by flexibility. And if it’s up to Henk Ouwerkerk, this should also be the case for consumers of large quantities of energy. This Dutch start-up designed a system that they have called Rankine Compression Gas Turbine. A steam turbine that can be switched on when there is a need for more power. Why is this so convenient? Large consumers often buy electricity in bulk. So when they unexpectedly need more than that, they tend to buy extra. However, this costs them a lot of money and puts an extra burden on the electricity grid.

By using the RCG system from Heat Power during times of peak demand, you can avoid that this ‘peak demand’ becomes the new standard. You can’t use this superfluous amount of electricity for any other purpose, so it’s a real shame that it’s generated for no reason. The steam turbines can be activated in the event of a power outage but remain inactive for the rest of the time. Ideal for manufacturing companies that have to deal with fluctuating and unpredictable demand. 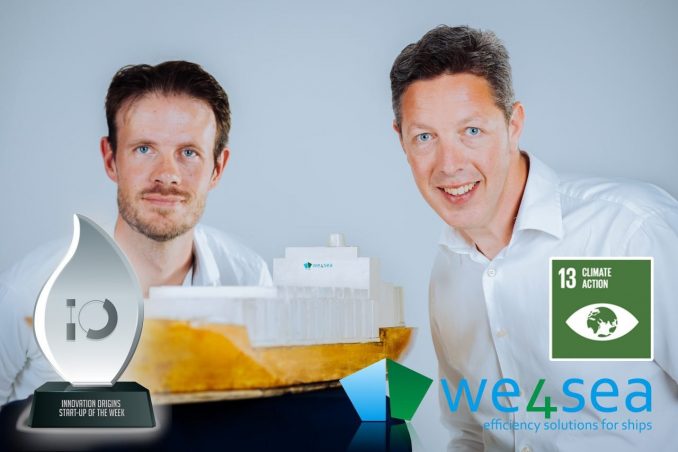 The fact that flying and driving contribute to the emission of greenhouse gases is now well known. We all have to live more sustainably on a massive scale and every polluter has to be involved in this. One sector which is somewhat less commonly recognized as far as this is concerned, is the shipping industry. Container ships are essential for the transport of goods around the world, but they have a very nasty disadvantage. They use heavy crude oil and this is about the most environmentally damaging fuel out there. In fact, one container ship produces as much carbon dioxide emissions as no fewer than 50 million cars. So there is a lot of ground that can be gained here, as they pointed out by the We4Sea start-up based in TU Delft.

What does this international team do? They use data models to advise the maritime sector on how to reduce their emissions by a substantial percentage. Measurement equipment usually has to be installed for comparable initiatives, which is easier said than done for large ships. We4Sea uses a unique technology that utilizes satellite data, ship position data, weather data and technical data from the ship for creating a computer simulation. Real-time advice is generated on the basis of this data. This enables the crew to drastically reduce their emissions. These energy-saving measures are not only sustainable, but also make a considerable difference in terms of costs for companies. Because, of course, no one wants to emit more than is strictly necessary just for the sake of it.

Much still has to be done despite the fact that in recent decades considerable steps within the shipping industry have already been taken towards a more sustainable future. The sector has set itself strict targets. By 2050, greenhouse gas emissions must be reduced by 50%. While such targets are naturally a welcome first step, they still have to be met. This is also easier said than done. For example, the Dutch government has not met its 2020 targets. Nor do  they expect to meet those of 2030 either. Perhaps the shipping industry will succeed in 2050 with We4Sea’s help! Their single-minded, innovative approach to a sector that is not known for its flexibility and sustainability has in any case convinced us to honor We4Sea with the title of Start-up of the Week!

Platform24 first European health app to receive EU…
InnoSIGN aims to increase survival rates of cancer patients…
Thanks to Autoscriber, doctors pay more attention to you…
In Denmark, Nemo Healthcare proves that home monitoring is…
Bar is too high for medtech start-ups to reach hospitals
Battery-powered boats are mainly suitable for short hauls
Manage Cookie Consent
We use cookies to optimize our website and our service. Help us to make our site better by accepting all cookies.
Manage options Manage services Manage vendors Read more about these purposes
View preferences
{title} {title} {title}