Greek start-up Recytrust designs smart rubbish bins for glass, aluminium, paper and plastic which incorporate a scale that keeps track of how much rubbish it contains via an internet platform. The bins are emptied once they’re full. Their contents are sold via an online auction to a waste collector who sells or reuses the paper, plastic, aluminium or glass. “Following a trial at two large organizations in Greece, it was clear that there is a market for the smart rubbish bin,” according to engineers George Steggos (CEO) and Marilena Makrinikola (COO).

What prompted you to set up Recytrust?

“We wanted to let people in our country know that their rubbish is worth money. When you buy a product in the supermarket, you also pay for the packaging, like for a bottle or a can. So these have value. Because you paid for them. Instead of dumping them on a rubbish heap, you can also use them for making new things. Greece lacks a proper infrastructure for processing waste efficiently. It is not incinerated like in The Netherlands, but ends up somewhere on a landfill that uses up land. The available space for rubbish dumps is also limited.

Recycling packaging is a good solution for this as well. It’s crucial that companies who participate in our system are able to earn money from this. During an online auction [see video below, ed.] the raw material is put up for auction and sold to the highest bidder. That buyer can resell it or process it themselves for the energy generation or produce materials that may last even longer than the original product. For instance, discarded plastic bottles can be used to make chairs. Chairs have a longer lifespan than bottles. If this happens, it is not a case of recycling but of upcycling instead.”

What was the main obstacle you had to overcome?

“We needed to teach the people of Greece why recycling waste is worthwhile. During the first trial of the rubbish bin system at two companies in Greece, some employees reacted in a hostile manner. They weren’t keen at all on it and were like – ‘Leave me out of it’. Some even said they didn’t want the card that you need for opening the bin. But after the trial, 70 % were convinced that collecting and separating rubbish does have added value. Because they saw that it can make money. Another problem is that Greece lags behind countries like The Netherlands as far as the ‘‘Internet of Things” is concerned. They still need to be thoroughly trained on how to use smart products. Considering that the rubbish bin is packed with IoT.”

What has been your biggest breakthrough so far?

“That we successfully completed a trial with two major customers and then realized that we are in effect creating a market where our customers make money out of rubbish.”

What can we expect from Recytrust over the coming year?

“We’ll complete the trial phase this year. We want to expand our customer base and become active in other countries too.”

Where do you want to be five years from now?

“We want to be all over the world by then. Our product is well suited to countries where a good rubbish disposal infrastructure is is not readily available.”

“Exactly. There are plenty of countries where our product can be put to use. The larger our network becomes, the greater the amount of raw materials we will be able to auction off, such as plastic and aluminium. That makes it even more interesting for purchasing agents to do business with us.” 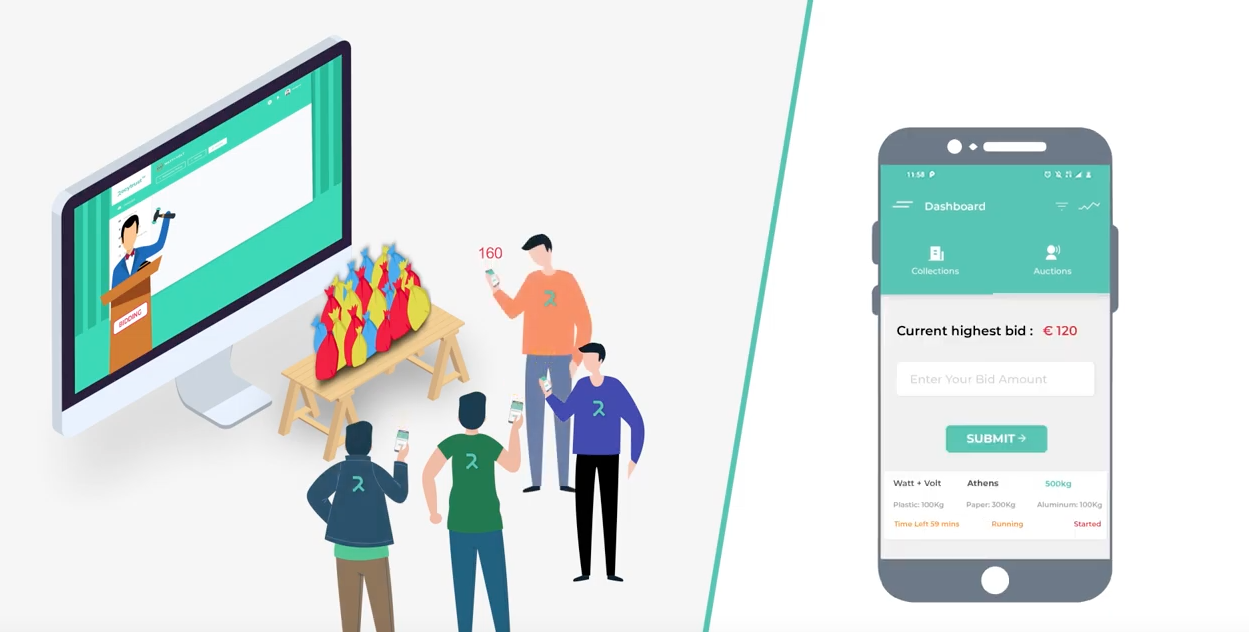 What added value does your product offer?

“Our scale measures to the nearest ten grams how much of a particular type of waste there is in the bin. That level of accuracy allows us to auction off our customers’ rubbish so that they can earn money off it. In addition, we provide our customers with a sustainability report which details the ways in which they recycle or upcycle their waste. This is possible because we get the data from the bins, which automatically tell us how much is inside that can be sold. Since we know where the waste comes from and where it goes, we create a block chain. Which means we always know the origin of our raw materials.”

Ganiga’s rubbish bin sorts waste by itself
Soon you'll be sitting on a street bench made out of your…
With Vriflex, separating waste is a breeze
Greece gambles on greening to get out of crisis
PAKT wants to make recyclable glass packaging the norm
Start-up makes fruit trays from recycled plastic: 'You can…
Manage Cookie Consent
We use cookies to optimize our website and our service. Help us to make our site better by accepting all cookies.
Manage options Manage services Manage vendors Read more about these purposes
View preferences
{title} {title} {title}