Eindhoven wants to become a smart society. But how does that work? What’s going on in a society like that? Are there any good examples to learn from? DataStudio Eindhoven explores the transition a city has to go through to actually become such a smart society. Each week, we present a new contribution on E52. This week: the vision of Boyd Cohen and Rob Adams, looking for a happy city rather than a smart one. Read all the articles in this series here.

Boyd Cohen and Rob Adams are on a mission. Enough of all this tech-driven smart city talk, they say, we have to follow another road. Smart cities are still okay, but what the world really needs is a focus on happy cities. “Even when we ask the visitors of the annual smart city congress in Barcelona – and that’s what we did – the picture is more than clear”, Cohen says. “Every city council speaks of smartness. What they mean: tech, data collection, IoT, sensors, those kinds of things. But what people really want is things like nature, clean air, and social connections. Nobody is longing for a just a tech city.”

Every city wants to be smart, Adams adds during a meetup in the People’s Pavillion in Dutch Design Week. “But what we have seen in recent years, is that smartness became tech-driven. That’s what we have called Smart City 1.0. Later, this changed into something you could call Smart City 2.0: tech-enabled, but city-led. Now, we think it’s time for the third phase: smartness based on citizen co-creation. It’s still smart, but tech is just an enabler when appropriate, not as the main driver. And even this version of the smart city is not yet complete.”

Adams and Cohen have started their platform Happy Citizens as a means to help rethink the city concept. “We apply design thinking to help make cities happier. We believe cities should be designed around happiness, not technology or efficiency. We believe in co-creation of fun, engaging and happy citizen spaces, one project at a time, one neighborhood at a time to make the world a happy place again.” To get there, the two merged their own platforms, Cohen’s UrbanInnova and Adams’s Six Fingers, for a new framework.

At Dutch Design Week, they showcased their mission with the help of representatives from six example cities, Aarhus, Barcelona, Bristol, Braganca, Paris, and Eindhoven.

The big question for Adams and Cohen is: what are the new metrics of the happy city? How can you steer on happiness? As a way to check the most important elements, they came up with the “Happy citizen hexagon”, showing the main drivers: 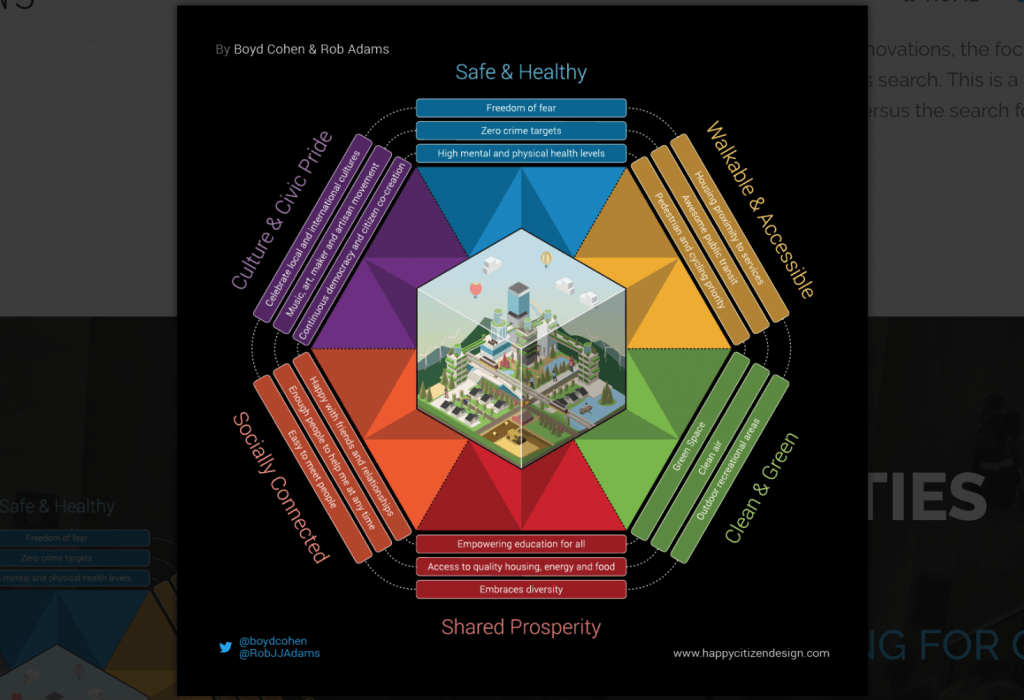 To show that these are truly relevant and working examples, Cohen and Adams throw their specimens onto the audience in the People’s Pavillion. Oklahoma City, where the citizens were more than happy to pay 1% more tax in order to have a say in what would be done with the extra money (“Build us a basketball stadium! Reorganise the parks!”). Not by accident, the city turned from one of the fattest ones in the United States to one of the fittest. Or take Medellin, where the worst neighbourhoods received the best transport system and the most beautiful library. Or Vancouver and Bologna, where design thinking is now changing them into the greenest cities on earth. Barcelona, often used as the example-city for smart cities around the globe, has developed a FabLab with lots of bottom-up open source initiatives that now conquer the world. Vlaardingen is shown for its approach to change the loneliness of its citizens by giving them all opportunities to contribute to a better city. “It not only improves the city, but also the individuals living in it.” And look at Paris Plage, an initiative by the city council of Paris that not only made the city greener and cleaner (the ultimate goal is a “post-carbon city”) but also turned out to be the best way to start up social things. Adams: “There are always 1001 reasons for not doing it. But people enjoy it, so just do it anyway.”

Boyd Cohen concludes the event by a call on everybody involved in the smart city business to start looking for ways to create happiness. “This is our framework. Be a smart city by being a happy city. Tech is not a solution for loneliness, and it’s not the main driver for the things people want the most.”

One of the six city examples came from Mary-Ann Schreurs, deputy mayor of the Eindhoven. She came up with a strong plea to bring design thinking into city planning. “Will being a smart city help us? No. It’s based on the neoliberal economic model where all you as a citizen can be is a way for creating money for 5 Californian companies.” Watch her whole speech in the video: 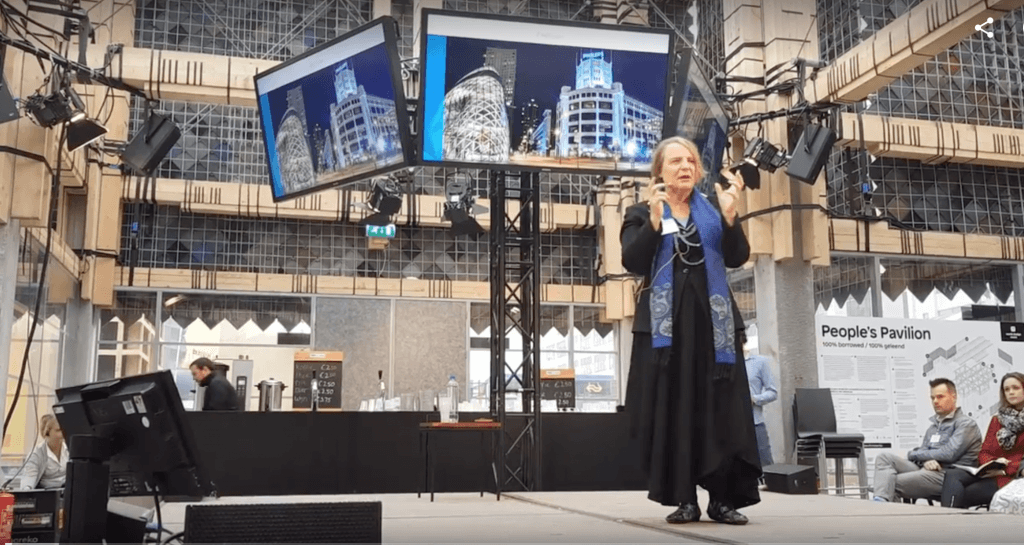 For a smart city, you need to densify, not expand