EUV etches with high-energy lasers at nanoscale in silicon wafers for the production of microchips. The technique saves chip makers time and money in manufacturing the next generations of microchips that will enable innovations in consumer electronics, health, entertainment, autonomous cars, robotics and artificial intelligence. The European Inventor Awards of the European Patent Office will be published on 7 June.

The prestigious Awards comprise five categories and a total of 15 finalists. Erik Loopstra and Vadim Banine are nominated in the category ‘Industry’.

Microchips are everywhere, and we use them at any time of the day or night with our computers, smartphones, and devices. Microchips must also be able to handle more and more; every two years the capacity – measured in terms of the density of the transistors on one microchip – doubles. Integrated circuits have grown from thousands of transistors in the 1970s to billions of circuits on the same surface. One of the main drivers of this development is photolithography, which uses laser light to ‘etch’ geometric structures on silicon wafers. 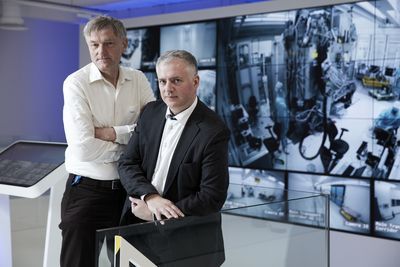 Physicist Vadim Banine and system engineer Erik Loopstra have been working with their research and engineering teams for two decades at ASML, the world’s largest lithography systems manufacturer, on the next generation of microchips. Loopstra has been a systems engineer at ASML for more than 25 years and has studied mechanical engineering at Delft University of Technology. Loopstra is currently working on the next generation of optical systems for EUV at ASML supplier ZEISS in Germany. Banine did two years of postgraduate research at Eindhoven University of Technology (TU/e), where he also obtained his PhD. He joined ASML in 1996. Since then, he has applied his scientific insights to the realization of technological breakthroughs in EUV. Loopstra and Banine both have dozens of patents to their name.

Patent holder ASML is the world’s largest producer of lithography systems with an estimated 85 percent market share in terms of revenues over the past year. In 2017, the listed ASML employed some 19,200 people worldwide, of whom more than 4,000 worked on EUV technology alone.

'Innovation has remained robust in Europe'
SMEs in Europe are lagging behind in the development of…
Student team invents smart bra that can replace painful…
Priorities in High-Tech and Semicon: a Dutch regional…
Academic heart, commercial head
Impulse printing has the potential to change microelectronic…