In an opinion article written for the Washington Post, Christine Emba gives a scathing rebuke to companies in Silicon Valley that develop what she calls “useless” products. The example product she chose to focus on is the Juicero, a juicing machine that provides cold-pressed drinks “on demand”, using corresponding “produce packs” filled with pre-cut fruits and vegetables. Last Wednesday, Bloomberg reporters discovered that the expensive juicer is essentially unnecessary, because you can just as easily squeeze the produce packs with your bare hands. Despite the pointlessness of the Juicero, the company managed to raise around $120 million dollars from Silicon Valley investors.

Do people become entrepreneurs just for the sake of being an entrepreneur, or because they see an opportunity of making a quick buck? Do investors invest for the same reason? The sad truth is that many times, they do. What Christine is talking about is the dark side of the startup boom. Not only do these ventures fail to have the positive effect on society that they claim, they take the focus away from the startups that are actually making real, positive impact.

We’ve chosen to profile a few of the Dutch startups present at the Hannover Messe last week that in our opinion, achieve both practical use and added societal value.

SEMiLLA Sanitation Hubs
Born out of a collaborative project between Holland Innovative, IP Star, Blue Engineering and HAS University, this startup is developing a water sanitation unit with far-reaching potential. It’s a fully self-supporting system, with no external energy needed. Waste in the form of human urine and feces goes in, and water and valuable nutrients come out.

Interestingly, SEMiLLA’s sanitation hubs are based on technology originally developed for use in outer space. The European Space Agency has been working on a research project called MELiSSA, aimed at developing an artificial ecosystem for regenerative life support systems for long-term space missions to lunar bases or flights to Mars.

SEMiLLA is working directly to solve this. The company plans to make its sanitation units transportable, which makes it ideal for installation in areas without much supporting infrastructure or for use in the wake of natural disasters. 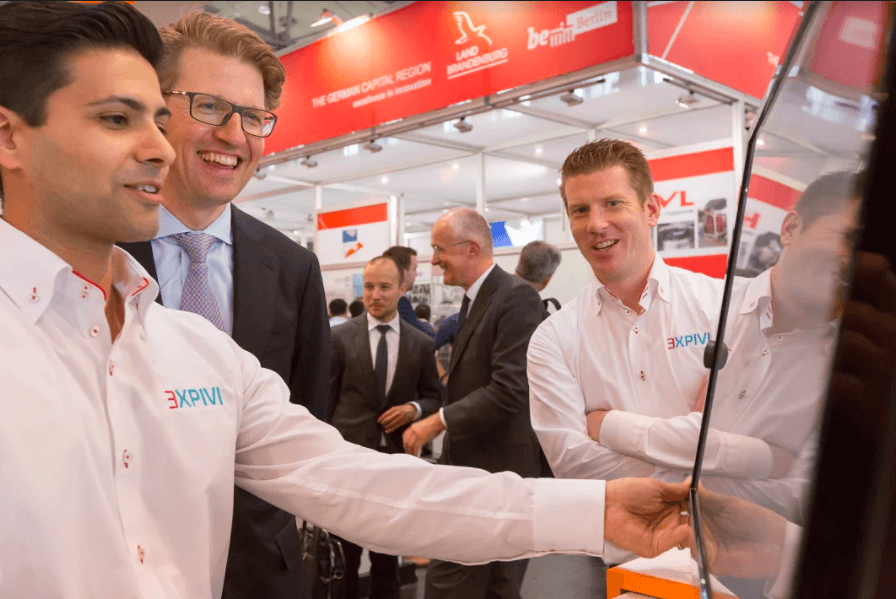 EXPIVI
At the opening of the Meet the Industry Giants event at the Messe, State Secretary for Education, Culture and Science Sander Dekker referred to the value of startups in the process of “putting knowledge to good use;” translating research findings into products that can be used on a wider scale. This “product translation” process is exactly what EXPIVI is doing.

EXPIVI has created the first online platform that makes it possible for companies and entrepreneurs to 3D-design their products in real-time. “We’ve made it simple,” explains co-founder Babak Mirzaie. “You don’t have to have any programming knowledge to use our product. Plus, it’s cheap and fast.”

Their customers include real estate agents looking to provide their clients with fast proposals that can be changed in real time while the client is watching. But their customer segment isn’t limited to real estate: they also have clients (mainly SMEs) that want to develop products fast while having the ability to show potential customers a concrete yet dynamic visual representation of the end result. For more ideas on how to use EXPIVI, check out their product video.

Solarus
Named in Gunther Pauli’s book The Blue Economy as one of the 100 most disruptive technologies with the potential to change the world, when you hear Solarus’s story, it’s easy to see why.

Solarus has developed what they call “PowerCollectors” – a new kind of solar energy collector that is much more efficient than regular solar panels. In additon, the PowerCollectors not only function as solar panels (solar PV) – they also function as a solar thermal system (read more about the difference between the two technologies). Francisco Mazza, sales engineer for the Venlo-based company, explains that having four Solarus PowerCollectors would be equivalent to having three regular solar panels and four solar thermal panels. For home owners, this means that their solar panel installation would be 50% cheaper with Solarus, and take up 35% less space on their roof.

“Not only is our solution cheaper and more efficient; we actually help to solve world poverty,” Francisco goes on to say. When they work with foreign companies and governments to implement the solar panels in other countries, they create a local supply chain – or  “assembly line”, as Francisco calls it – that creates employment for the locals. They’re planning to set up such assembly lines in Kenya and Panama this year. “It’s the future!” Francisco concludes.

Money is still dirty, but it’s not an added risk for catching corona

If a section lights up a color, a biomarker has been found