The forest fires in Australia, the countless floods and droughts, climate activist Greta Thunberg who was chosen as Person of the Year … Climate alarm bells are ringing louder than ever and with more voracity. This year is the first time that these alarm bells have also resounded so loud and clear in the Global Risk Report 2020 that is issued annually by the World Economic Forum (WEF). According to the report, climate change will be the greatest threat over the next ten years. As far as The Times newspaper was concerned, The WEF conference – which took place in Davos (Switzerland) these past few days – seemed more like a climate conference.

In the run-up to the Davos conference, WEF publishes an annual Global Risk Report that maps out the main threats to the world order. The risks are divided into six categories: economic, geopolitical, social, technological and, last but not least, the climate. The forum makes a distinction between the likelihood and the impact of this threat.

A sad bunch of firsts

It is the first time that climate-related problems dominate the rankings of the fifteenth Global Risk Report. In terms of ‘impact‘, climate scores first place. When it comes to ‘likelihood‘, climate related problems are in second place. Respondents to the Global Risks Perception Survey, which underpins the report, rank global warming problems – such as extreme weather and loss of biodiversity – as the five greatest risks for the next decade. One more premiere: this is the first time that risks related to one category account for the entire top five in the rankings. 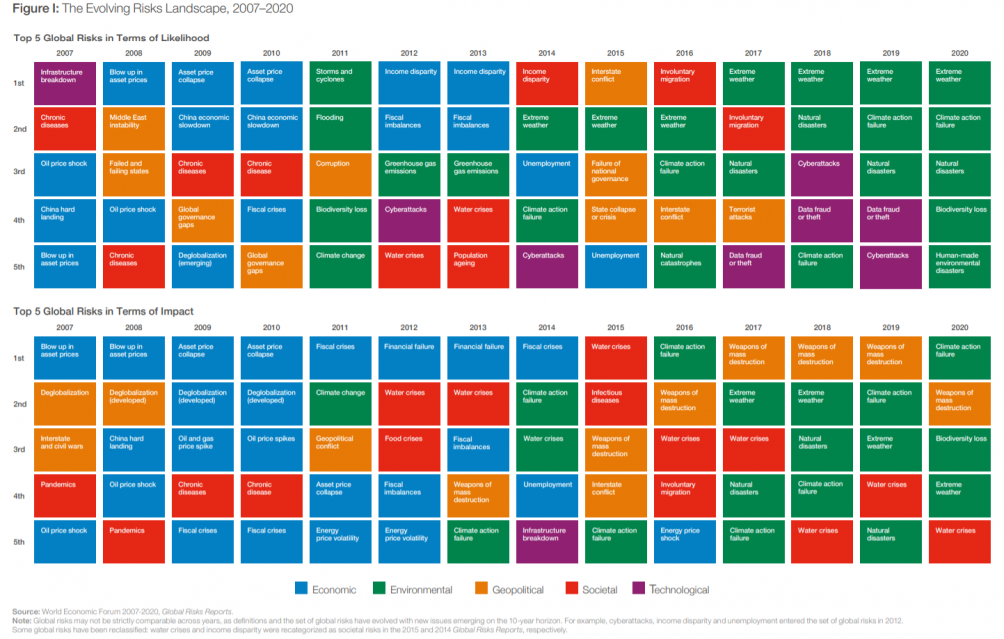 In the annual survey underpinning the Global Risk Report, respondents are asked about which risks they believe pose the greatest threat on a global scale. The survey is filled out by WEF’s network: industry leaders, governments and world leaders and others.

Respondents are asked about e.g.:
– The world in 2020. Respondents indicate which risks they think will increase or decrease this year compared to last year.
– Assessment of global risks: Respondents estimate the impact and likelihood of thirty global risks over a period of ten years. 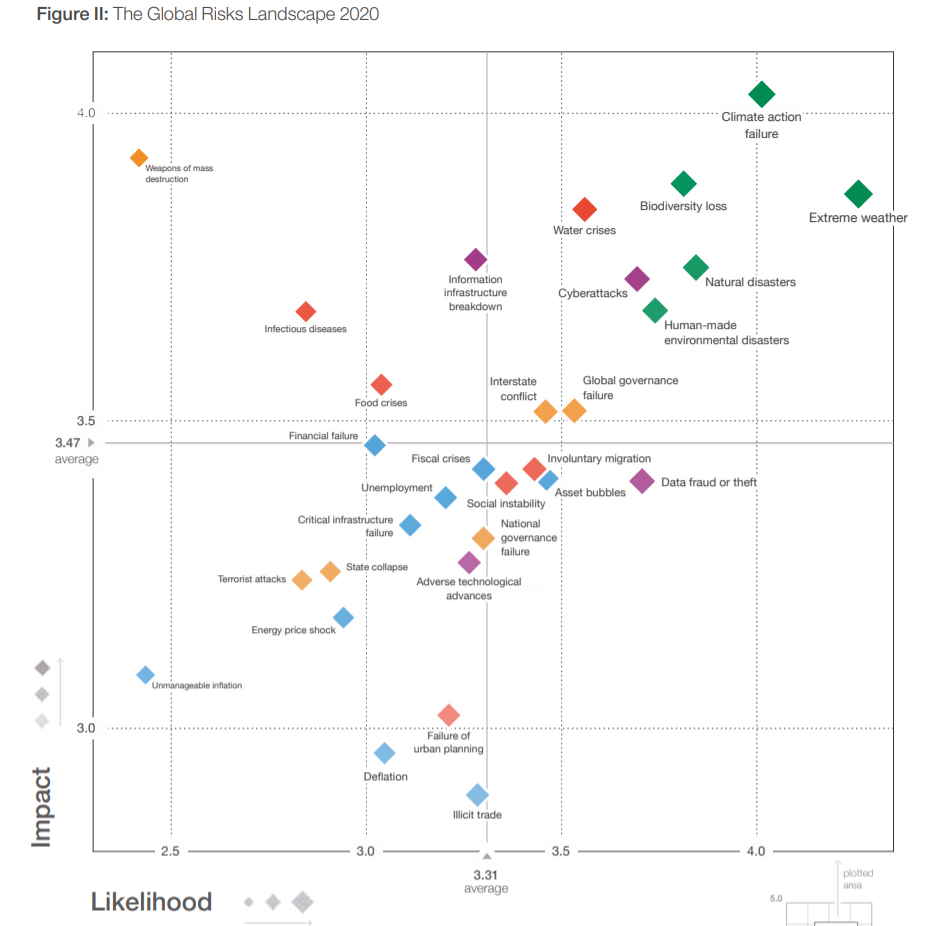 The WEF concludes therefore that concerns about climate change are mounting. In Europe, in particular, it became clear that the political wind is shifting. The Greens had a huge turnout during the elections to the European Parliament. The President of the European Commission, Ursula von der Leyen, recently announced a wide range of measures – namely “the European Green Deal” – aimed at reassessing the European economy in the light of climate risks. And that is sorely needed. According to the report, global warming may expose Europe to mosquito-borne diseases such as malaria by 2080.

‘Europe can be at the heart of tech purpose’

Fortunately, the WEF has also noticed a positive trend: European tech start-ups are taking on a prominent role when it comes to challenges posed by climate change. Aafke explains what this is all about in this week’s IO Explains video.

The World Economic Forum is a network of the largest companies in the world, international politicians (ministers/presidents), intellectuals and journalists. Every year the WEF organises a meeting in Davos, Switzerland as well as a number of regional conferences.

The WEF was founded in 1971 by the Swiss professor and businessman Klaus M. Schwab and is registered as a non-profit foundation. The head office in Geneva employs four hundred people representing more than fifty nationalities.

In Portugal, climate change is knocking on the door
Climate risk map shows the earth's forests status
Spain: decentralized hotspot for climate change
Halving emissions by 2030 can keep 1.5°C within reach
Green chemistry to bring significant CO2 savings in the…
Electric Auke: ''Don't Look Up' is no laughing matter for…
Manage Cookie Consent
We use cookies to optimize our website and our service. Help us to make our site better by accepting all cookies.
Manage options Manage services Manage vendors Read more about these purposes
View preferences
{title} {title} {title}