“Without mental health there can be no true physical health” said the first Director-General of the World Health Organization (WHO) in 1954. However, even now, in the 21st century, mental illnesses are still underrecognized and undertreated. In the European Union, for example, about 25% of the population suffers from major depression disorders –  the most widespread mental illnesses characterized by sadness, loss of interest or pleasure, loss of appetite and other symptoms. Quite often depression and other mood disorders cause disability and sometimes even lead to suicides.

Mood disorders in a form of long sick leaves and the costs of traditional treatment (medication and psychotherapy) put a heavy economic burden on the society, which makes researchers and industries look for the alternative ways of managing and treating mood disorders. Some of the available technological solutions for mental health support are self-help smartphone applications or neuroscience-based wearable tech gadgets like Thync or doppel that provide a relaxing effect.

An innovative wearable neuroscience-based solution for treating mood disorders is developed in Maastricht Health Campus by the young startup EmoSys. The method proposed by EmoSys should make the treatment of mood disorders simpler and more affordable than with the use of traditional methods. “The wearable device that we developed looks like a small electropatch that the patients place on their cheek before going to bed,” says Mehrdad Seirafi, the CEO of EmoSys. “The wearable produces electric impulses that stimulate the nerves involved in smiling and laughing. These nerves, in turn, transmit the electric stimulation to the parts of the brain that are involved in emotional regulation. If you are happy, those areas of the brain send the signal to the motor system and that causes you to smile. What EmoSys wearables do is going backwards and stimulating the source of emotions. With our device, the patients would notice the changes in their mood in about two weeks of usage.” 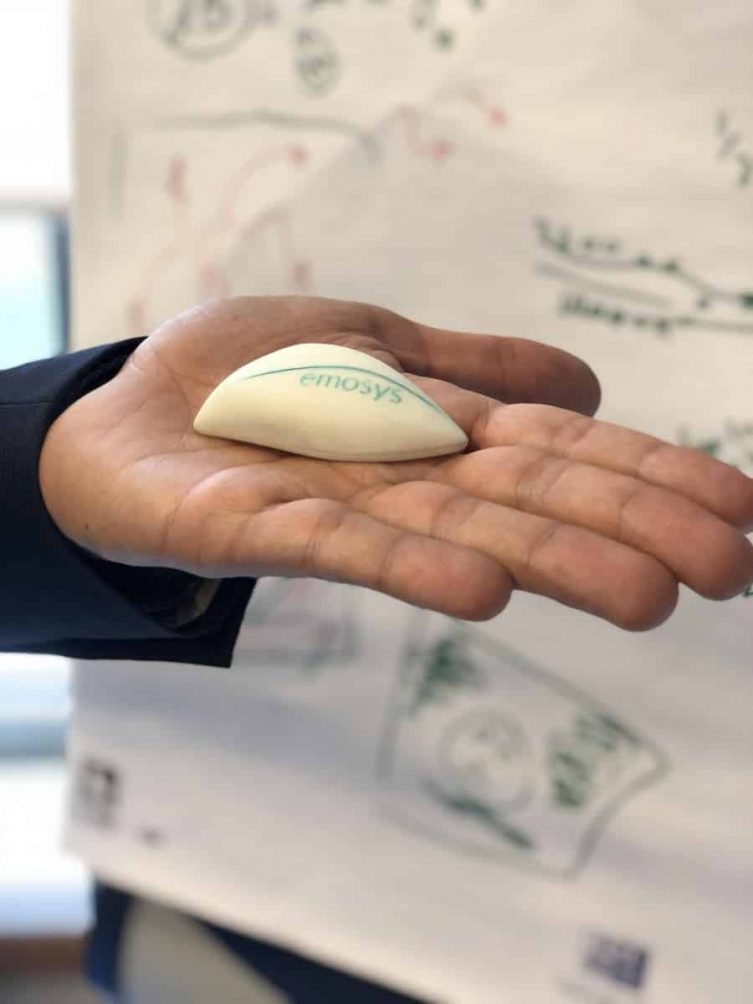 In comparison to the pharmacological interventions for the treatment of depression, the wearable developed by EmoSys has no known side effects. However, like any medical device it requires years of testing: at the moment EmoSys wearables are undergoing safety tests. “We are waiting for the ethics committee approval so as we could begin the clinical trials of the device,” says Seirafi. “At the same time, we are also looking for the financial sources to start our trials. If we find the financing soon enough, we are expecting to have the wearable in the market in three years.”

EmoSys plans to introduce our wearables into the market as complementary to anti-depressants and psychotherapy. The CEO of EmoSys says: “If the evidence is good, we to go into the primary method. It is very difficult to come as a primary method of treatment to the market – there is a large resistance to it.”

EmoSys is expecting that their mood-elevating wearables will be helping not only the people who are already receiving treatment for depression within the healthcare system. “There is such a thing as subclinical depression: many people have depression-related problems, they go to the doctor, but they do not fit into the criteria of depression having not enough symptoms for the diagnosis and treatment. The doctor usually tells them to wait and return in a month or in a half a year. That number of these people is really big – there are four times more people with subclinical depression than the ones who have the official diagnosis of depression. Of course, people who suffer from subclinical depression try to solve their problems by themselves – and here comes alcohol, drug usage or other things. These people are the biggest target group of patients for us.”

The creators of the mood-elevating patch believe that the device might be also used by people who are not diagnosed with depression or anxiety disorder but simply want to deal with the occasional bad mood. As Mehrdad Seirafi says, this application of the device might be developed as a company spinoff in the future.

Finding out if you have a depression by playing a video game
The foundation has been laid - now the Dutch photonics…
Knowledge Sharing Centre ensures the transfer of essential…
Everything that can affect a plant
Dutch Medtech Factory Twente expects first companies in its…
Vaccination without needles; 'that is the future'
Manage Cookie Consent
We use cookies to optimize our website and our service. Help us to make our site better by accepting all cookies.
Manage options Manage services Manage vendors Read more about these purposes
View preferences
{title} {title} {title}