With graceful movements Huub Smit puts on his glove. He steps back and moves his hand slowly, as if he pulls an invisible rope. With a roaring engine, a truck moves in his direction. The man raises his hand, stops. Shocking and squeaking, the truck stops as well. What follows is a cat and mouse game: first the truck is pushed back by the man, then the man tries to escape from the truck. Who is in control? The truck or the man? That is the question. 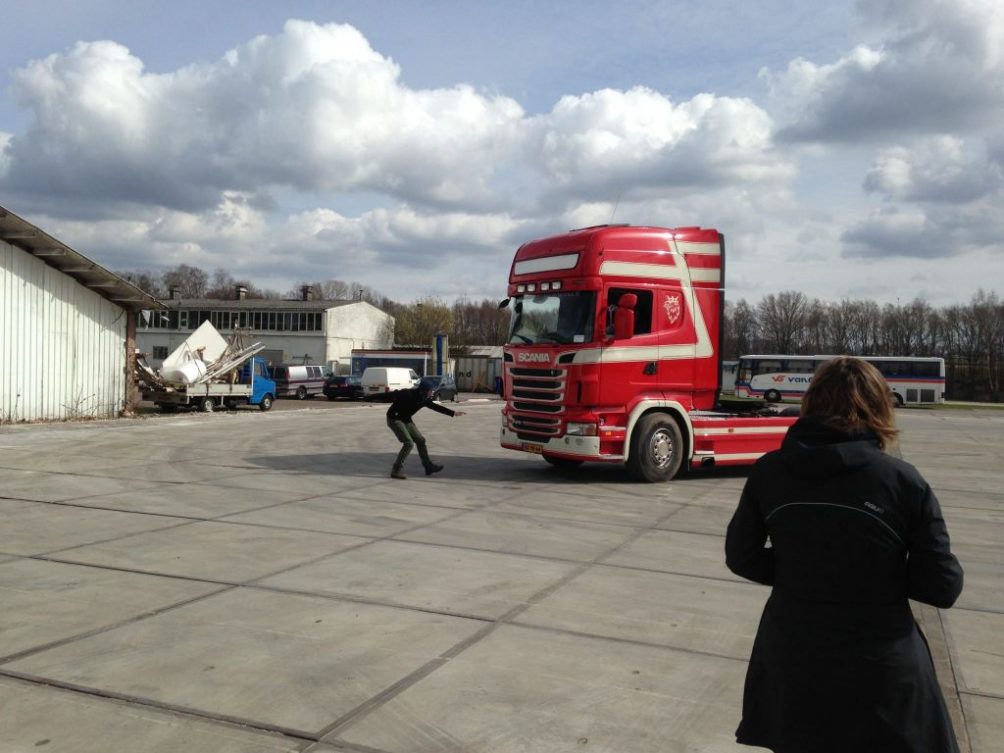 E52 watched the rehearsal of Groot Wild, a play performed by Afslag Eindhoven with trucks in the lead. On May 8, the premiere will be at the Automotive Campus in Helmond. The replays will be three weeks later, in the Dutch Technology Week (26, 27 and 28 May).

E52 offers a series of articles in preparation for the Dutch Technology Week (23-29 May). This is the second one. Last week we published “The beauty of the Manufacturing Industry“ 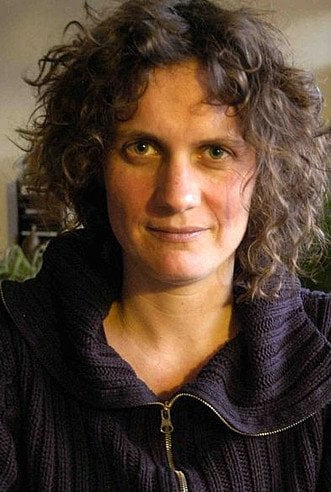 “As a theatre maker, relationships are very interesting to work with,” Afslag Eindhoven director Gerrie Fiers explains. “A man of flesh and blood in front of such a colossus of iron, that tremendous difference of scale was really appealing to me.”

The performance is about the rapid technological change and human responses. “What if big – in this case the trucks – also becomes smart and starts making its own choices, how do people respond to that? Can these two worlds coexist? Does that make us, the people, redundant?”

“Where is this going in the future? Maybe people will have a chip in their arm.”

Making a play with trucks asks for a lot of trial and error, Fiers says. How do you wake trucks to ‘life’? Laughing: “Trucks can not talk, of course. But you try to give them something human in a different way. You just need to make good use of the things that belong to the truck, such as light, horn and engine. For example, by making the engine roar, you can show that a truck is angry.”

She doesn’t mind that this way of playing is very sensitive to the personal interpretation of the viewer. “We do not offer a ‘finished’ outline. We want to plant a seed. People need to think of how they would react if trucks were self-propelled. That leaves a lot to the imagination of the spectators. Take the scene you just described, where Huub puts on a glove. That glove could be a tool with which he keeps control of the truck, like a lion tamer uses a whip. Perhaps this is possible in the future, if people have a chip in their arm, you do not know. In the show there are several characters who handle technological developments each in a different way.”

Something else that’s important: “Because the trucks in Groot Wild really come to life, the audience should not see the drivers. You could of course disguise the windows, but the audience can’t be fooled. They know that there are drivers. So we have invented something else: the drivers where “seat dresses”, so they sort of disappear in their chair. This way, the audience doesn’t see anybody in the cabin.”

Because trucks do not fit into a theater, the show is outside, during twilight. The trucks move around the audience. “For this we have to take a lot of safety precautions, you obviously do not want something to go wrong. So there are huge concrete blocks around the stands. Also for our players, we take the least possible risk. We can leave nothing to chance, with these big trucks no improvisation is allowed. Everything must be well coordinated.”

Theater and technology, the combination is far from obvious. “But that does not mean that it is not possible, it’s very interesting to link these worlds.” With this performance, Fiers hopes to attract people to the theater who normally don’t come there. “On Facebook, I see a lot of truckers sharing our plans, which is nice because they are a different group than our average audiences. It’s nice to combine these two worlds.”

Start-up that will turn the trucking industry on its head:…
Hydrogen truck's prosperous future draws closer thanks to…
Inspiring teacher must be given time to let their passion…
Dutch Technology Festival focuses on filling the pipeline of…
Academic heart, commercial head
What would Leonardo da Vinci do with our education system?