Frits van Hout, Chief Program Officer and Member of the Executive Board of ASML, was the driving force behind the Dutch Technology Week right from the start six years ago. And he still is. We spoke with him about the importance – and the joy – of technology, and the ideas behind DTW, which will take place from 23 to 28 May.

If there would be one goal attached to the Dutch Technology Week, then it would be to bring tech and manufacturing into the hearts of the young generation. “It is not a bold statement to say that people of my age will not be able to solve all the problems of the next generation”, says Frits van Hout (1960). “So if there are too few young people who desire a career in tech, we will be facing big problems. That is why we want to emphasize the story behind the manufacturing industry. We have been neglecting this for too long.”

It is a story with two sides: dispelling the prejudices and highlighting the reality. Van Hout: “Surely there are still people who think that the manufacturing industry is dirty, difficult and something for boys. Far from true! By opening the doors of our industry for at least one week a year, we can show that engineering is fun, that it’s a social process and that we are able to invent beautiful solutions to all kinds of societal problems. And, indeed, that it is not at all dirty. The great achievement of the DTW is to enable our visitors to see the inside of places they normally cannot enter. You should see them afterwards: everyone is surprised about the beauty of it all, and in fact they are all happy that they know by now. That’s why we do it.”

Frits van Hout makes no effort to hide his pride in the performance of the manufacturing industry in the Brainport region. Which goes way beyond his “own” ASML. From the twentieth floor of the ASML tower on the outskirts of Eindhoven, he has a beautiful view of the city. “What you see there, that’s more than half of our supply chain. Without all of these companies, we are nothing, they are our natural partners. Especially in the manufacturing industry it’s all about cooperation. Yes, the head and the heart are important in building a company, but without hands you will never succeed. Have you ever been inside one of all those VDL companies? You can see welders and frasers and all the other specialists who make the most beautiful things you can imagine. It’s just wonderful. We have to show what’s happening inside all those buildings is, it immediately creates connection.”

“In this region we get things done through mutual trust”

The origin of the Dutch Technology Week, six years ago, was in itself an example of this typical Brabant connectivity, Van Hout recalls. “With around 15 to 20 people, mostly from industry but also from the local authorities and of course the knowledge institutes, we sat together. We wondered what we could do about better telling the story of the manufacturing industry, and came up with the idea of a Technology Week. Simple as that! You know, in this region we get things done through mutual trust. Not only in the Dutch Technology Week, but in our entire ecosystem.”

Perhaps it was the crisis in the years after 1990 and around 2009, that brought this feeling of the importance of trust, Van Hout thinks. “In difficult times you find out whom you can trust and whom you can’t. And really, I’m quite sure that our success in recent years is based on how we, as separate businesses, use each other’s strengths. No complicated long consultations with all the red tape, but just joining forces because you know that if somebody asks for your help, he’s got a good reason to do so. With a minimum of duty and a maximum of willingness. Do you think this a good idea? Okay, then you have my support. That’s how we move.”

The Dutch Technology Week still works on a budget that is put together by the same partners as in the early years. The goal is more or less the same as at the start, but gradually Van Hout has noticed that the story of technology has found solid ground in the region. “So the soil may be more fertile than ever before, but still there’s no reason to lean back. Although things are going well, we should not become lazy. There is still much space for improvement.”

DTW events are aimed at a wide audience. “Of course, everyone is welcome, especially during the ‘open doors day’, but we mainly focus on school children. They are the essential link, if we still want to perform the way we do now in a couple of years.” Van Houts best memories of previous DTW’s all have to do with this group. “Here at ASML we once offered a little test in which the children could experience and build how the rotation in your smartphone really works. At the end of the day, you see all those children running to their parents, shouting that they know how to do something Mom and Dad don’t understand at all. That’s when I think: great, we won another couple of children for our cause. It’s really not that difficult: just let them hear, touch, participate, build and in that way help them to understand all these complicated things.”

The region is full of wonderful technology companies, Van Hout knows. “And not only at the High Tech Campus. There’s an abundance of examples. Take PANalytical, a company focusing on X-ray analysis of various materials. It was only after taking part in the open day, that they found out for themselves how good they really are. Normally, such a company only focuses on the business market, so they had no idea how ordinary people would look at it. That was a revelation. Or take Vencomatic, the poultry company at Kempen Business Park in Hapert. They found out a way to transport the eggs just before the newborn chicks come out. This way the chicks have less stress. Moreover, antibiotics can be strongly pushed back, sometimes even to zero. You should of course know exactly when the egg comes out. Meanwhile, Vencomatic sells this concept around the world, isn’t that great?”

As for ASML, the advantage of being in the middle of an extensive regional manufacturing industry sometimes becomes evident from a surprising angle. Van Hout: “The tobacco industry has always been quite big in this region. Not much is left of it, as we know, but that’s how the laws of economics operate. So it might be a surprise when I tell you that ASML still uses an innovation that originates from the tobacco industry. They developed a device that automatically recognizes the vein-implantation of a tobacco leaf. This was needed to prevent cracking of the leafs. We at ASML have picked up exactly that principle for our wafers. That’s what I mean by the importance of the regional ecosystem: by opening up the doors to each other, we help each other. This is as important for big companies as it is for SME or a startup.”

When asked, Van Hout finds it difficult to choose the between highlights of the program of the upcoming Dutch Technology Week. “Phew, there is so much to do and see, as always. Many familiar elements, like the open day (the High Tech Discovery 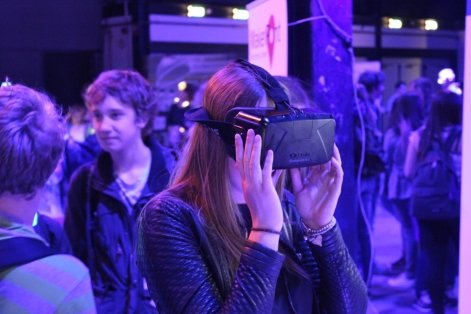 Route) and school visits. And oh yes, the Quiz Night XL of course, and the Night of the Nerds.” This event, organized especially for school children, was the most popular part of DTW in previous years, with 3,400 visitors in 2015. Van Hout: “That’ll be 4,000 this year for sure, just about the maximum for the Klokgebouw. There are schools that include it in their curriculum! Specifically aimed at secondary schools and a very nice combination of serious and fun: there is both attention for things like 3D printing and drones techniques as for a techno party.” Laughing: “By the time the music erupts, I usually try to get away.”

“In the manufacturing industry, it all revolves around the way you implement an idea, and we know that this is easier in informal setting.”

Although the Dutch Technology Week was born in the high-tech heart of the Netherlands, Van Hout also looks at it as an invitation to the rest of the country, and soon maybe even beyond. “It is called the Dutch Technology Week for a reason. That is why we are also very happy to be part of the large Startup Fest by Startup Delta. This might bring an extra connection. But an initiative like ours has to start somewhere and it is only logical that it is here with us, in the capital of technology. But surely there are other places where the DTW could thrive. Think of places like Drachten and Almelo, both with large concentrations of technology based industries. Now that I think of it: actually, the chances of success are better in places where the relationships are more relaxed, less formal. The Randstad remains a problem in that regard. In the manufacturing industry, it all revolves around the way you implement an idea, and we know that this is easier in informal setting.”

While the main events of the Dutch Technology Week will remain in Brainport, Van Hout does not rule out the step across the border at some point. “You can find us already in Drachten and Twente, but why not think bigger? A high tech discovery trail for example might also be interesting elsewhere.” Contemplating about places in the world where a Technology Week could thrive, Van Hout makes the comparison with ASML. “Our suppliers and partners are in places like San Diego, Stuttgart and Silicon Valley. Not for nothing the places where most patents come from. They are hotbeds of smart guys. Solid ground for a Dutch Technology Week. “