Skills instead of diplomas and CVs? The Netherlands Organisation for Applied Scientific Research (TNO) research report entitled ‘Het skillspaspoort mogelijke-oplossing voor vrij reizen over de arbeidsmarkt‘ (The skills passport possible-solution for free travel across the labor market) outlines the need and solution for a tool to make skills measurable.

With a desperate shortage of workers, the “skills passport” provides a useful HR tool to connect employers and employees. It is also a method for dealing with out-of-date qualifications and the emergence of entirely new professions driven by digitization and robotization of the labor market.

Due to the rapidly changing labor market, it is difficult, especially in the healthcare , engineering and construction sectors, to make what skills potential employees actually possess measurable. Consequently, the need is great for all parties involved, including the professional training institutes, to make things more measurable. Qualifications often do not properly cover the knowledge and skills that young people leaving education have gained, says Joost van Genabeek. He is a senior researcher at TNO and one of the authors of the report. “By the way, that applies to skills that they have acquired, not only within their education but also outside it. “

Education often lags far behind actual practice, according to Van Genabeek. “For example, within the construction and engineering branch, people are trained for installation technology on the basis of old criteria. At best, they get an extra qualification for the installation of a heat pump. While there is a great need for skilled professionals for the energy transition. The result is that people without any training, including potentially rogue operators, set themselves up as installers. This is not a good development for all parties involved, including the consumer.”

What is particularly useful, especially for such a rapidly developing industry as installation engineering, is the ability to gauge skills. This is more useful than just looking at CVs and diplomas. Van Genabeek: “A CV doesn’t say much about what someone can do. Certainly not about the skills that she or he has gained within but also especially outside of her or his education. The problem is: how do you measure those skills? How do you set benchmarks for them? A skills passport can offer an appropriate tool for this. In order to develop such a tool, we looked at international examples and knowledge systems. Apart from that, we analyzed existing job postings with the help of AI.” 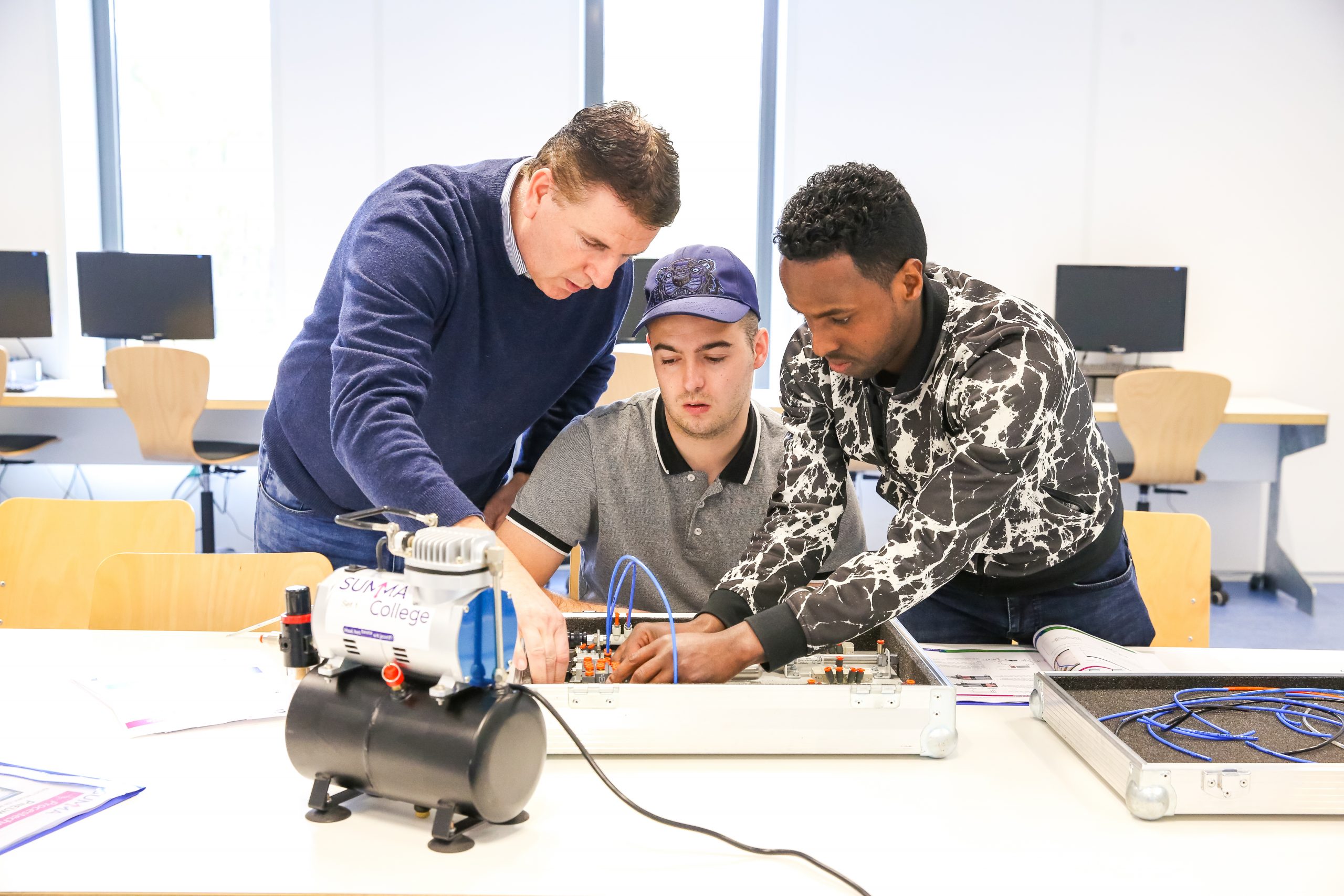 Recruit more tech students with a VIP tour and by building ‘useless boxes’ – Innovation Origins
Summa College will develop learning paths together with companies in the next 2½ years to get the latest in innovations to students as quickly as possible.

Jos Sanders, a colleague of Van Genabeek’s at TNO, agrees that there is a sizeable gap between what students in vocational (MBO) and university of applied sciences (HBO) programs are supposed to learn within their programs and what skills they actually possess. “At the moment, there are far more vacancies than there are job seekers. The government says: ‘Wonderful, look how great the economy is doing.’ But it’s actually not good news at all. This means that the greening of the Netherlands, but also the rest of Europe, will be delayed,” says Sanders, who is also a lecturer in ‘Leren tijdens beroepsloopbaan‘(Learning while on your professional career path) at HAN University of Applied Sciences and a member of the management team of House of Skills in Amsterdam.

What’s more, according to Sanders, companies are also at a loss as to how to make the best use of human capital. “With all the associated consequences, such as employees suffering from burnout and people who are stuck in a job that does not suit them. Research has shown that 1 in 3 employees state that they are not using all of their skills. In fact, one in 20 says they lack particular skills. The main issue, however, is utilizing existing skills rather than developing new ones.” According to the researchers, the crux of the matter is how people can know what skills they have. And also which skills they still need to develop. That’s where the skills passport comes in handy.

The Volandis knowledge and advice center for sustained employability in the construction and infrastructure sector, for example, now works with a digital skills passport. Sanders: “The construction world is changing rapidly as a consequence of the energy transition and innovative technologies. For example, to drill holes in concrete, which is what De Vis Groep in Watengen specializes in, you need people who are good at that. But to drill holes in wood instead of concrete, you don’t necessarily need a completely different set of skills. You can use your current concrete drills for that purpose just fine. That way you avoid ‘social waste’: people who are left on the sidelines.”

During the pandemic, a typical case of thinking along different lines occurred in the healthcare sector, Sanders explains: “Airplanes remained on the ground. That also meant the cabin crew. But all those people had to carry on getting paid. That’s when the idea arose to put those stewardesses and stewards to work as hosts in the healthcare sector, which was actually at risk of being overtaxed. They have similar skills.”

As such, there are all sorts of opportunities to apply your skills to jobs other than the one you were once trained for. Sanders: “The labor market is tight. The idea behind such a skills-based approach is also to help people without the right qualifications find work. The skills passport enables these people to also move freely around the labor market.”

Sanders does understand that it can be tricky to make skills outside of qualifications quantifiable to others. In the meantime, a solution has been found for that. “Some employers already work with a so-called open badge. A kind of credit on your qualification, so to speak. Sometimes educational institutions also offer something similar. You can use an edu badge to give an extra credit for certain skills that are not officially defined within the curriculum. It’s good to realize that qualifications are not watertight either, even though they have usually been worked towards for years. Take a carpenter’s training for example. If this person has also learned something about installing electricity during their training, you will not usually see this mentioned on their certificate. You can use an edu badge to mark an extra skill like that.”

Photo: If cabin crew are unable to fly because of the pandemic, flight attendants (m/f) can step in as healthcare hosts, as they have similar skills to certain healthcare personnel. © Mircea/Pixabay

This story is the result of a collaboration between TNO and our editorial team. Innovation Origins is an independent journalism platform that carefully chooses its partners and only cooperates with companies and institutions that share our mission: spreading the story of innovation. This way we can offer our readers valuable stories that are created according to journalistic guidelines. Want to know more about how Innovation Origins works with other companies? Click here

Lightning-fast 5G network will change agriculture, mobility…
A robot as a colleague? - No technological innovation…
Product passport is a basic need for a sustainable economy
TNO and NEC: Doing good things together to make a real…
5G impasse in global and Dutch agriculture. TNO calls for…
Respond to ever-changing circumstances using adaptive…