The Brainport Eindhoven region’s economy grew by 3% in 2015, according to the CBS, in an announcement made earlier today. The region grew 50% faster than the Netherlands as a whole (+ 2%). The region – “Southeast Brabant” in official CBS language – also showed a growth compared to the previous year; in 2014 the growth was 2.2%.

What is striking about the ten fastest growing regions in the Netherlands is their location; it is primarily regions along the A2 motorway. This confirms that the metropolitan regions of Amsterdam, Utrecht, Den Bosch and Eindhoven are the economic backbone of the Netherlands. Growth in these key regions along the A2 was between 2.7-2.9%, slightly behind that of Brainport. 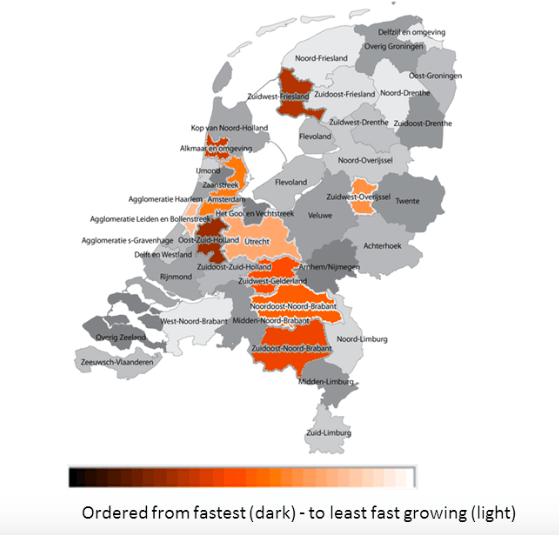 A growth in industry has mainly propelled the growth in Brainport. This sector has grown significantly and is highly concentrated here; 16% of the active population in this region is employed in industry (compared with the 10% national average). In 2015, the industrial companies invested amongst other things, in updated equipment and software and focused on new technologies and production processes. They also benefited from growing foreign demand which has led to rising exports.

The figures reflect that Brainport is amongst the fastest growing regions in the Netherlands, but comes in fourth place behind three other regions. For the regions in the first three places, number 1 (East South Holland), 2 (West Friesland) and 3 (Alkmaar and vicinity), they have in recent times undergone a municipal reorganization (2014/ 2015). So their high growth can partly be explained by the growth of their territory.