Antonio has invited us to TMC on the High Tech Campus. Through them, he works at various clients on automotive related issues. When we enter the brand new building, he is already waiting for us. Antonio takes us to the common room on the ground floor and we are pleasantly surprised with what we see. The interior looks homely and warm and is fully equipped. “For me, TMC is ideal as an employer, because I can get to know the market and various companies. They help me with the development of new ideas and personal career growth. After my master’s and PDEng in Automotive at the Technical University here in Eindhoven, I wanted to stay in the city because of the career opportunities and because I like it here. Everything is easy here.”

At the end of his bachelor in Mexico, Antonio knew he wanted to continue studying and that it was interesting to go abroad. He attended a presentation by an employee of the TU/e and became interested. “I knew a lot of Mexican football players of PSV, but the link PSV is the club from Eindhoven, I discovered later. I did not know the city. “The process of arranging everything for his future study in the Netherlands took a year. “Besides arranging everything with the university, I also had to hand in a lot to the Mexican government to get a scholarship. Eventually, I came to the Netherlands a month before the study started.”

“I laugh at all the struggles I had when I first came to live here”Antonio Colin, Automotive engineer

“My start here was quite difficult: everything was new and even shopping was complicated because I did not speak the language. Luckily I ended up in a nice student house, where unfortunately nobody could cook, but that caused some funny scenes. Thanks to the introduction week at the university, I quickly met many people. That introduction was a big party, it felt like a vacation! Meanwhile, I have to laugh at all the struggles I had when I first came to live here. Fortunately, everything is now much easier for me. I just bought a house and I live there with pleasure.”

Within TMC, Antonio works together with a number of international colleagues on an initiative to make it easier for new TMC colleagues from abroad to start up their life here. “The great thing about TMC is that if you have an idea, the team takes the time to listen to you. As a result, together with six others, I set up the Expat Community group within the company. For internationals, it is difficult to build friendships in a work situation. It can not be compared to, for example, my situation when I started at the TU/e. That is why we have also set up a buddy program. We are the experts who live here for a while and we can help new people on their way. We also organize activities. Last winter we went ice skating with a big group of people, including lessons from Dutch teachers. New internationals feel more at home in this way because they also get to know new people.” 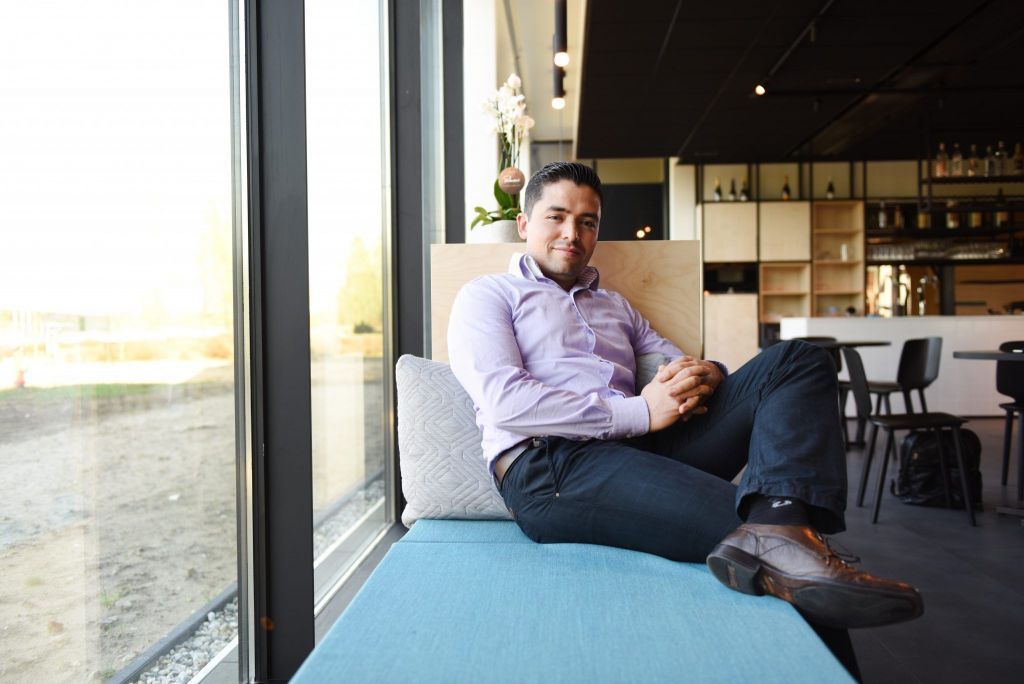 It may seem logical, but it is certainly worth mentioning that Antonio wanted to do the interview in Dutch. He doesn’t agree, but we think it is quite special how well he speaks Dutch. In the many conversations with internationals we had, only a few people choose to start the conversation in Dutch. “I live here and I think I should be able to speak the language. I cannot expect the Dutch to speak English to me constantly. I am part of society and that is why it is so nice that I can communicate in the language.” Antonio keeps himself busy. It turns he is a DJ next to his job as an engineer. “I learned that at the CKE (centre for art and culture education, red.) here and now I play at parties and at Stratumseind. I also like sports: fitness, tennis, skating. I think my career is important, but my life outside of it too. Life is short, so you have to make the most of it. And that is what I do in Eindhoven.”

Dimethyl ether instead of diesel – how trucks can become cleaner