(This is a guest contribution by Josje Verbeeten, director of the Robot Academy. The article appeared earlier as a blog post on the site of Smart Robotics, based on an article by Warna Oosterbaan in NRC Handelsblad of 23 October 2017)

Cobots do not replace people, they work with them. Often people are skeptical at first, but they become enthusiastic when they see the possibilities.

Eight orange gravel grapples pour on the fragile carcass. They lift, turn and spit fire. The arms retract after a few seconds, and the Volkswagen Golf bodywork is ready for the next phase. The YouTube movie is as fascinating as it is ominous, because there is almost no human being left in the factory. Robots do the work of mechanics, welders and sprayers – but much faster and more accurate. Thousands of factory workers lost their jobs as a result of robotisation. That is the gloomy picture.

In a more optimistic scenario, robots and people work together. The robots do the dangerous and arduous jobs, the people control, operate and supervise them. They are ‘cobots’ or collaborative robots, and they are engaged in an unstoppable advance. “Everyone who works in a production environment has to deal with it. And that’s what will happen soon”, says Josje Verbeeten. She is director of the Robot Academy, an Eindhoven-based organisation that trains production employees in dealing with cobots. 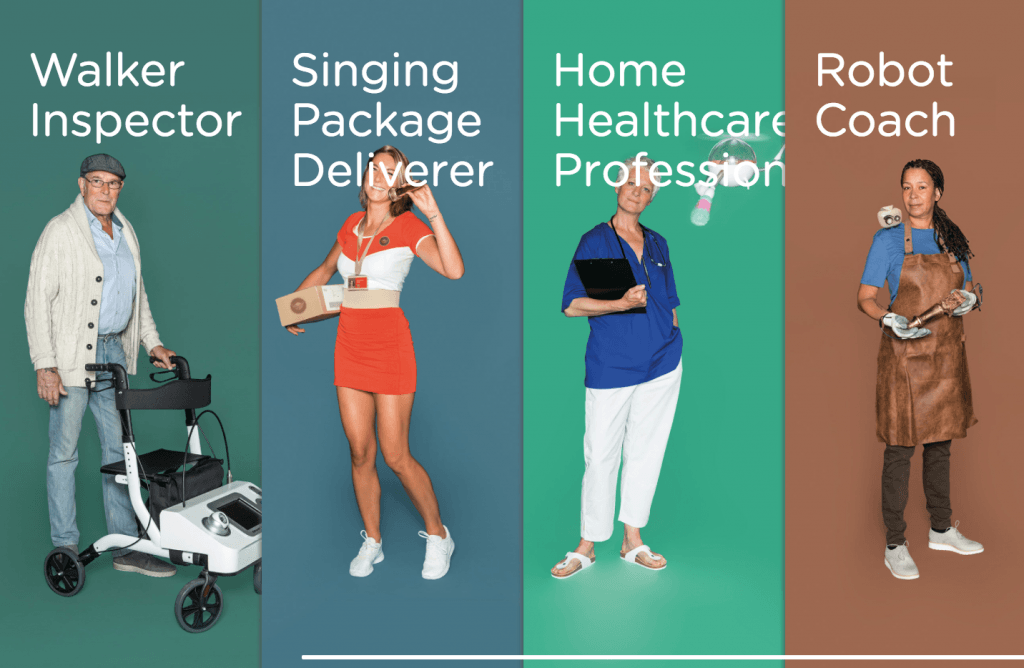 In Eindhoven this week, on the occasion of the Dutch Design Week, the Hubot event started, which wants to show that the scope of the cobots can be even wider. A link between entrepreneurs, administrators and designers presented examples of cobots working together with people who would otherwise be unemployed, for example because they have a disability. They can, with the help of robots, practise a profession that does not exist at present, but perhaps will do so in the future.

Smart rollator
The examples have been born of creative minds. For example, there is the air traffic controller who controls a drone in the form of a falconer and has to chase the birds away from the airport. Or the home care worker who leaves the tiring cleaning work to a cleaning robot. Or the shiva masseuse that is capable of much more with four additional robot hands.

But there are also examples of a more practical approach. Paul Simons, associated with Eindhoven’s high-tech company TSG, invented a rollator that enables urban dwellers with walking difficulties to get a job as environmental inspectors. The rollator is equipped with cameras and measuring instruments to measure air quality and inspect drainage. “I was looking for something to help the elderly get out of their isolation and get them moving”, says Simons. “This rollator makes sense for a stroll. This can lead older people to leave the house.”

Another application, which is less easy to achieve in the eye, is a suit that can turn a visually impaired man or woman into a traffic controller. The suit contains electric motors that translate the traffic image into tangible movements. When a car is approaching from behind, it is translated into vibrations that gradually increase the back.

Designer Marijke Bergman, associated with Fontys University of Applied Sciences, admits that the idea still belongs to science fiction. But in military circles, this type of sensor is already being used. In complex situations you don’t see and hear enough. A sensor like this gives your eyes in your back.

Other jobs, new occupations
The presentation of these new professions stems from an Eindhovens programme called “Empowered by Robots“. The initiators are alderman Staf Depla, the Start Foundation – an organisation that wants to help people with a distance from the labour market find work – and designer collective Next Nature Network (NNN). Aim: to show that you can do more with a robot than without such a thing.

Koert van Mensvoort, director of NNN, sees more opportunities than threats in the robots. “Today, only one in every 250 people in the Netherlands currently work in agriculture. Much of the work is mechanized and automated. But have these former farmers all become unemployed? No, there are other jobs and new occupations to replace them.” Van Mensvoort thinks the robots will also change our work. When people and robots work together, there is a bright future, the initiators say.

In the production, these cobots are already working hard, says Josje Verbeeten of the Robot Academy. “We coach the people who stack, spray, pack and repack in factories and have to deal with cobots. They are often sceptical in the beginning, but they become enthusiastic when they see the possibilities. The cobots take the hard work out of their hands and their own work shifts to control and supervision.”

The cobots in turn also learn to deal with people. They feel in their sensors, for example, whether the stack they want to grab is still in the hands of a real person. Soon they will be able to recognize that real person as such.

Understanding coach
Roald Klumpenaar shows us a fine example of the fruitful interaction between robot and man. The 24-year-old social entrepreneur studied at the business school HEC in Paris and now works at Amfors, a large social workshop in Amersfoort. With his design for a method of getting people with disabilities to perform a complex task, he won the prize for the best idea at the Hubot event. He developed his idea together with TNO.

His idea is about the final assembly of a street lamp with LED lights. This requires accurate assembly of a relatively small quantity of lamps, work that is difficult to fully automate. The employee is sitting on a white workbench. The table has trays with components, in front of it is the large luminaire in which the lamp can be mounted.

A projector above the table projects clear installation instructions in the correct sequence onto the table. The parts that need to be picked up are highlighted at the right moment by the beamer as well as the location where they should end up. The direction of rotation of the screws and bolts is indicated by projected arrows.

If something goes wrong, the image recognition software sees it and a friendly correction is displayed. If everything is well completed, the employee receives a compliment.

It is as if there is always a supervising coach standing next to the employee. “The difference is that he or she can work alone and feel more autonomous”, says Klumpenaar. “Less guidance is needed.” In addition, the method makes it possible to expand an employee’s repertoire of actions. “He can process more steps, so the work can be more diverse.”

Amfors also conducts trials with the HoloLens, Microsoft’s computer glasses. In these glasses, 3D hologram images are added to the visible reality. It is used to instruct employees on the steps involved in the assembly of complex products. Like the instruction for an IKEA cabinet, but in 3D.

The cobots help people with a distance from the labour market. Klumpenaar: “Our employees love it. They work with advanced techniques. That is good for their sense of self-esteem.”