During Dutch Design Week, E52 will be introducing you to the festival’s Hidden Gems. Ten special designers who we feel are the stand-outs of this edition. A different Hidden Gem will enjoy the limelight each day of DDW. Today: Viola van Alphen about the exposition Internet of Women Things

Curator Viola van Alphen already previously organized the Art & Tech event, Manifestations, where the question ‘Will the Future Design Us?’ was asked. This year there will be an exhibition about the Internet of Women Things. Technology has an increasing influence on all of us and it is accompanied by commentary. An example of this is the exhibition Manifestations – Internet of Women Things. The exhibition is inspired by the manifesto of the Serbian activist Jasmina Tessanovic, which describes seven ways to make the Internet of Women things true. Critical Thinking, Positive Inclusion, Positive Seclusion, Politics and Policy, Just Do It, Design Fiction, and Diversity.

“If you only allow technology to be made for and by white men, then you will get a lot of things that haven’t been thought through,” says Van Alphen. Technology that is made for and by women will, therefore, produce different results. “The exhibition is about looking from a different perspective and dealing with technology.” An example of this is the Wearable Baby Monitor. “When you are pregnant, you sometimes panic: ‘Is it going well, is the baby still alive? I haven’t felt him kicking for a few days.’ If you wear such a monitor, you can see, amongst other things, the heart rate and you know that everything is going well.”

Van Alphen would like to put the emphasis on technology that is ‘human driven’ rather than ‘profit driven’. “If you innovate with profit as the main goal, then you get a product that is not always good for people. With technology that is ‘profit driven’, then something such as privacy is often in second place. When I, for example, look at Silicon Valley, I see a lot of things happening where I think: ‘That is not how I would like to see the future of technology.’ I hope that we in Eindhoven can develop technology in a healthy manner, with attention on the human aspect.

“When you are heading towards a future with global warming and you only have technicians who are thinking about solutions, then it is logical to provide the brain with a kind of cooling fin to cool itself down.”Viola van Alphen, Internet of Women Things

With the exhibition, Van Alphen wants women to deal with technology in their own way. Besides this, she wants women to be interested in technology and feel assured in it because they see examples of how it can be done. The curator also wants to create an understanding for people who have other needs in the field of technology. And that current technology affects us all.

At times, the exhibition paints a dystopian image of the future. For example, there are five dolls of babies that are better adapted to deal with the future society. “When you are heading towards a future with global warming and you only have technicians who are thinking about solutions, then it is logical to provide the brain with a kind of cooling fin to cool itself down. I think that sounds a bit scary, but if you only look at it from a technical perspective then it is the smartest thing you can do. It is better to intervene with a baby because the skin is more malleable.” Another baby has thicker cheeks in order to absorb caffeine better as a future hard worker. “It is really about what kind of future we want. It is a perhaps a bit shocking, but if we let demanding businessmen and technicians make our future for us, then this could be the future.”

Fortunately, hope for the future is also reflected in the exhibition. An example of this is Carin, the smart underwear from LifeSense Group which helps women with urine loss. “When I see this kind of project, I think wow, there is still a positive future for me,” said Van Alphen. The exhibition also includes smart clothing, scent dating and a smart zipper.

The exhibition is divided into two locations, one half is in the library, the other half of the exhibition can be enjoyed at the top of the Veemgebouw in Strijp-S. You can join in and reflect on the Internet of Women Things via the Facebook group: IOWT Workshop. 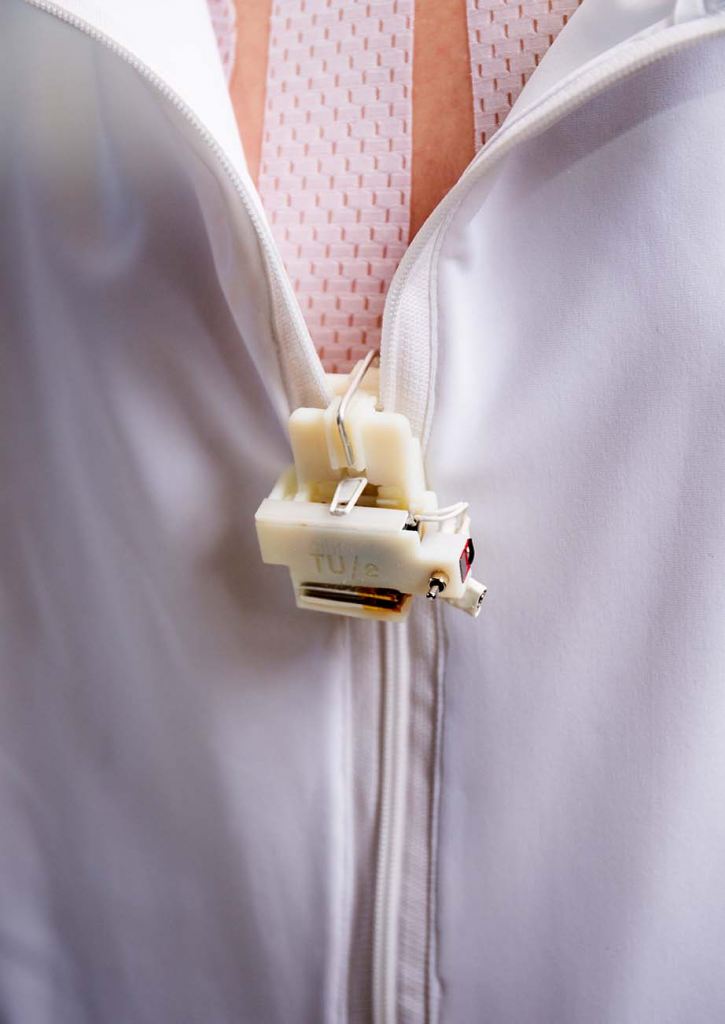 The smart zipper of the TU/e

The ten gems of DDW were created in collaboration with Dutch Design Daily and curator Katja Lucas from DDW. Do you want to admire the gems yourself? Every day, Urban Exploring Tours and KOGA will organize a special bike trip and drop by the selected designers. You can find more info here.