At the High Tech Campus, seven start-ups have been busy with the HighTechXL accelerator program for three months. They are on their way to the XL Day on 6 December, where they can win over future investors. E52 takes a glimpse into the crowd and works towards XL Day with portraits of the start-ups. Today: OneSoftDigm.

The South-Korean start-up OneSoftDigm is participating in the HighTechXL accelerator to expand to the European market. After successfully launching a crowdfunding campaign in their home country, the company thinks it’s time that the rest of the world learned about them. COO Seungmin Yoo talks about how the company was started: “A few years ago, our CEO tried to live healthier. He was exercising, eating healthy and sleeping well, but he still didn’t feel healthy. He had too much body fat, while his BMI was normal. Body fat is very important because too much of it causes diseases such as diabetes and hypertension. But people don’t know how much body fat they have.” That discovery was the start of a mission: make measuring your own health easier.

“If someone wants to measure his body fat, they have to go to the gym or a hospital. Our device makes it possible to easily measure your body fat at home.”Seungmin Yoo, COO OneSoftDigm

That led to the development of their first product: One Smart Diet. “We developed a portable body fat analyzer. The device has four electrodes. If you install the app on your smartphone, the device connects with Bluetooth and can scan the upper side of your body. Because most of the body fat is located in the upper part of your body. The device can measure the body fat, but also skeletal muscle mass, Basal Metabolic Rate, and BMI. With this data, the app makes a summary for the user. It displays the body type and can give dietary and exercise suggestions.” The first version of One Smart Diet launched in South-Korea and Japan last May. “For four years we have been doing research. At first, we only focussed on the development of the device itself. After finishing that product in January, we are now focussed on the software and the healthcare features.”

Measuring your body fat is a complicated process, but the start-up makes it a bit easier: “If someone wants to measure his body fat, they have to go to the gym or a hospital. Our device makes it possible to easily measure your body fat at home. There are already many body fat analyzers on the market, but they have a low accuracy. We have measured our device with medical devices and we have a 98.8% accuracy.” The high accuracy of One Smart Diet is thanks to an algorithm the start-up developed. 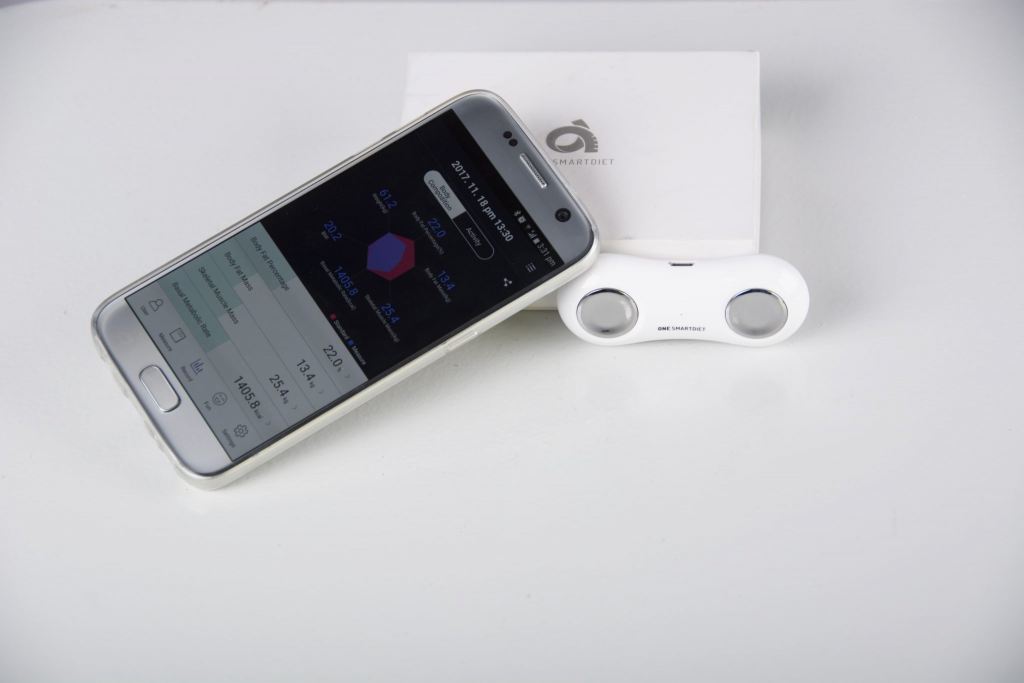 The algorithm stands or falls with the data collected by the company. In that way, OneSoftDigm is a big data start-up. “The data is very important to us. We can recommend the right advice for costumers if we collect data from costumers. We believe that the future of healthcare is in mobile solutions, and data plays an important role in this respect.” With this technology, the company hopes to enter the B2B market. “We are developing an engine to use these technologies in a management system of gyms.”

The ultimate goal of the start-up is to build a device with which users can know everything about their own bodies. “There are so many healthcare solutions and wearables on the market right now. We want to combine these two things.” But that is a hope for the future. Right now, the company is preparing the launch of the second generation of One Smart Diet, that will be available in Europe through a Kickstarter campaign early next year.