Big news, a couple of weeks ago: out of 20 candidates for Startupbootcamp High Tech XL, six were from Greece. Four of which made it to the final eleven. Which was extra special because their home country was more or less in ruins – financially. Was it coincidence? 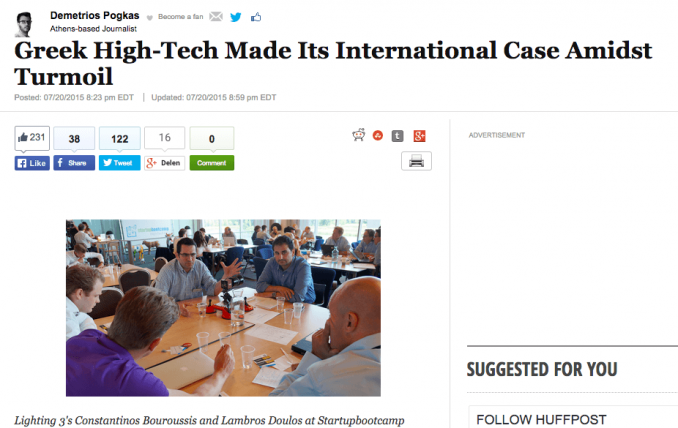 Not so much, the Greek journalist Demetrios Pogkas says on Huffington Post. He joined and watched the Greek delegations during their pitches and wrote an analysis. His bottom line: there is an awful lot of high tech talent in Greece. Pogkas:

Being around these promising young researchers while my country appeared to be on the brink of collapse was kind of sad. It was sad to see that Greece has some world-class talent (indeed, in a sector such as high-tech or hardware), yet the way it currently functions it cannot really support it, let alone help it shine. I was feeling almost depressed being at a place like the High Tech Campus while looking at the pictures of people queuing up outside of banks to withdraw 60 euros.

Guus Freriks – cofounder and managing director of the programme – agrees:

“During our Fast Track event in Athens in late May, we saw amazing technologies that have been developed in science parks and research centers there. I’m excited with the level of technology, innovation and scientific accomplishments in Greece. There are technologies with important potential and people with motivation and passion, and that shine in their eyes to build successful companies.”

Freriks doesn’t comment on the political or financial situation in Greece. But one thing is certain, he says: whatever happens, he wants to continue working with Greek startups:

“Europeans don’t really get the human catastrophe going on right now in Greece. Even if the country explodes, I will continue working with Greece because of the innovation it produces.”

Worth your time: the whole report by Demetrios Pogkas.

Dortmund: where innovation drives community spirit
Fe+Male Tech Heroes inspire people to shape their future
In the game of capitalism, we have to accept that America…
Weekly recap: time to move!
Academic heart, commercial head
Data is the new gold, but only if you know where to look