Innovators from Lisbon and Rome were the first to enjoy Eindhoven’s new TechTrek program, an initiative of Dispatches Europe and Eindhoven Airport. The inaugural TechTrek brought nine entrepreneurs, influencers and innovators to Eindhoven Sunday to check out the local ecosystem – a 5-person group from Lisbon and the 4-person team from Rome.

TechTrek is Eindhoven Airport’s economic-development initiative connecting this region to the major tech and innovation capitals of Europe where the airport flies. The idea is to fly in entrepreneurs, tech talent and innovators with the goal of raising Eindhoven’s profile as an attractive place to live, work and start or expand businesses. 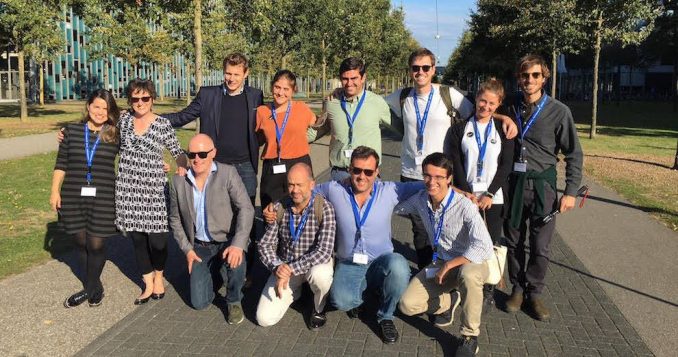 Eindhoven, like every other global tech centre, needs talent. “So Eindhoven Airport set out on a quest to use our networks to identify thought leaders, creators, entrepreneurs, engineers, influencers, doers and dreamers”, Dispatches Europe-founder terry Boyd explains. “Then, we’re bringing them here with hopes they’ll see Eindhoven as we do: the city with everything from huge business opportunities to the best quality of life in Europe.”

The two groups were only here for one full day, so the goal was simple: show them Eindhoven from High Tech Campus to Strijp-S and talk with them about the business climate as well as the quality of life. Boyd: “The airport sponsored the entire trip, covering airfare, ground transportation, lodging at the Tulip Inn at Eindhoven Airport, and meals, including lunch at the Colour Kitchen on High Tech Campus, and dinner at Radio Royaal in Strijp-S. This wasn’t about hard-sell, and there were no requirements to commit to the city. But at least five of the nine TechTrekkers are already considering expanding their businesses here or coming to work. All nine told us they’re planning to return here later to research future business opportunities. Our question to each attendee was, ‘Is this what you expected?’ The collective reply was unanimous: ‘No, this is way cooler.'”

TechTrek creator Maurits de Beer, the airport’s manager route development, described a booming, affluent tech innovation centre where air traffic is expanding quickly. “Why are we so successful? Tech – everything from computers, self-driving cars”, he said. Ivar van der Smaal, the airport’s innovation manager, added Eindhoven Airport is more of an early adopter than an R&D lab for aviation. But he noted there’s pressure to innovate faster and make the airport smarter and more efficient by optimizing talent, processes and technology. “Why do we need to change? Because in the next 50 years, we’ll see a doubling of world air traffic”, he said. “To cope with that, his industry will have to embrace virtual reality, robotics, biometrics, augmented reality, artificial reality and drones. The big challenge is to combine technology and what’s appropriate to our situation.”

“We stop World War III. We make students find out that ‘the enemy’ is just someone to have a beer with.”

At High Tech Campus, the group was informed by representatives from HighTechXL, ASML, OOOH Studio and the High Tech Campus management. Also, they visited the High tech Plaza startup building, where they had talks with people from Amber and IPOS. GrowWise Research Center, also on High Tech Campus, was one of the highlights: Signify’s experimental LED light city farming labs. Here, researchers experiment with artificial lighting combined with climate controls to optimize indoor agriculture. So, there were labs full of lettuce, strawberries and herbs.

Another highlight was StudyPortals in the Klokgebouw complex. StudyPortals, which matches students wanting to study abroad with universities around the world, is one of the fastest-growing scale-ups in the Netherlands. It’s also one of the most unconventional workspaces in Eindhoven, from its rooftop terrace meeting space to its collaboration rooms and the general ambience, culture and philosophy. Asked about what StudyPortals does, “We stop World War III”, said Rob Jansen, strategic partnership director and our guide. What he meant, he said, was the goal is to create a generation of students experiencing the world for themselves. “Then you find out ‘the enemy’ is just someone to have a beer with.”

In the end, Maurits de Beer was very satisfied with the result. “TechTrek really shows what the airport is all about, connecting international professionals with Brainport Eindhoven and vice versa. One full day was really not enough to show all fascinating projects that are going on in Brainport. However, I believe we managed to highlight several interesting companies that tell the story in brief of Brainport Eindhoven for our international guests.”

Digital mentor sessions on that little voice in your head…