Approximately one thousand new jobs in the medical robot technology in 10 years time, Maarten Steinbuch recently mentioned in his column at E52. But how? We had a conversation with the prof. dr. ir. who is uniquely convinced of the combination between technological research and entrepreneurship.

Steinbuch currently has about 55 PhD students at the Technical University Eindhoven. For more than half of them, he’s the first promoter. Their research topics are diverse and are usually carried out in collaboration with big companies, such as ASML, Océ, Philips, Marel, DAF and TNO. Nevertheless, there are two ‘main streams’ on which Steinbuch spends more time than average: high tech systems (including car technology: the search for “the driving iPad”) and surgical robots. For both research lines he is both internally and externally the face of the Eindhoven university.

That makes sense, because Steinbuch’s enthusiasm is contagious: students notice that just as much as the university administration, his lenders and the large public. When Steinbuch is talking about robots, risks aren’t risks anymore, they’re opportunities. When he describes the future of autonomous and connected driving, we instantly believe that such a situation can’t be far away. The same goes for his efforts to set up a medical technological company in the university that can eventually support itself.

Medical Robotic Technologies (the name of the P.C.) has already been a P.C. for a few years, but has recently had a boost thanks to the success of PrecEyes and Microsure. But it will definitely not stop there, says Steinbuch. “When you look at the current PhD research, there are at least two initiatives which will soon be part of MRT: the schedelrobot ‘RoBoSculpt’ of Jordan Bos and the Deep Brain Stimulation of Mark Janssens. We also have several other potential candidates, for instance from the spine surgery, gynaecology and dental surgery. Eventually I want MRT to be a self-sustaining fund that turns new technologies, mainly concerning robotics, into successful businesses. It should enable new initiatives from the proceeds from the initiatives that have been running for some time. If roughly four out of ten new companies succeed, it should be achievable.”

But no matter how much Steinbuch can handle, running al those companies yourself wouldn’t be wise. And that is why he didn’t only appoint CEOs at PrecEyes (Perry van Rijsingen) and Microsure (Carmen van Vilsteren), but there has recently come a COO (Anupam Nayak) in order to take on the professional conduit about MRT. “In the not so distant future, I also want to add two business developers. And if everything goes as expected with RoBoSculpt and Deep Brain, there will of course also be business leaders.” That is how Steinbuch hopes to step by step take the jump to his one thousand employees.

By averagely growing 60% a year, Steinbuch expects to reach that number in 10 years. The new jobs will mainly be in research, development and the marketization of it. Steinbuch: “Thereby we stick to the strengths of this region: mechanics, precision mechatronics, robotics. That is the foundation, that is why these kind of developments can thrive here. Don’t forget that we’ve been working on this for about 16 years. People like Linda van den Bedem, the first PhD candidate in the field of robotic surgery, and Ivo Broeders, the ‘godfather of the DaVinci robot’, have put us on the track. DaVinci was the “general purpose” precursor, but then we went into depth. We showed that it could all go more precise, lighter and cheaper. Exactly, thanks to these strengths.” 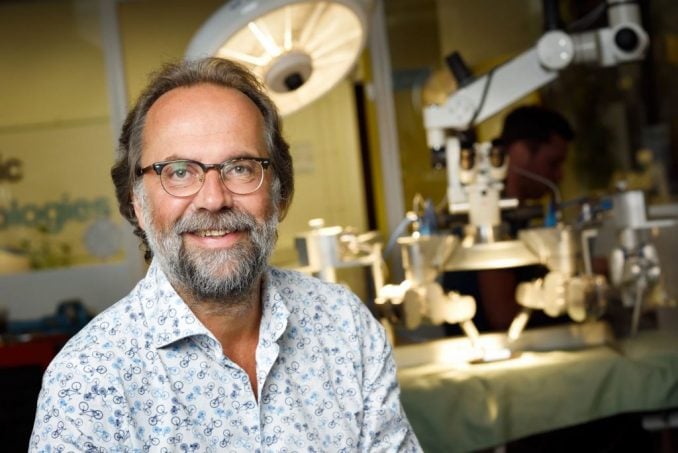 At that starting time Steinbuch already thought that research in a corporate form could be brought into the market. “But how do you even begin? You would definitely need 50 million for the robot of van den Bedem, not to mention the patents that were owned by the creators of the DaVinci then.” In other words, not matter how strong the specific points of the region were and are, it is not enough. “There is also great need for entrepreneurship, so we should actually organise the research differently. No more waiting for that doctor to say he needs further elaboration of our research, but going along with the market in a much earlier stage. Knowledge of entrepreneurship has to be around from the beginning.”

Steinbuch expects to solve a big part of that problem with his company Medical Robotic Technologies. But a lot of money is necessary for a flying start anyway. Not directly 50 million, but definitely a few millions a year to keep it going. “For that we’re having conversations with the industry. How great would it be if we could find four parties that would each put 250.000 euros a year into MRT. Eventually all that money will return to them, but it does take time. You can think of shares in the startups that will arise from MRT and that will one day operate independently, or for example of the right to produce the products that the startups invent. We must dare to think big anyway.”

Steinbuch says he’s close to an agreement with one company and will soon have conversations with other candidates. He can not suppress a feeling of jealousy towards the American colleagues who receive hundreds of millions from the rack of Google or Microsoft every now and then. “Talk about thinking big, they know how to do it there. That is also a part of their culture. Even though it sounds very nice, I would rather do it with our own money. So from Europe. That way we can continue to sail our own, independent course.

'Quit your job for one day a week'
A robot as a colleague? - No technological innovation…
'I hear too often that women have to be harder, more…
The enterprising student easily beats professor
Team CORE uses shredder to safely chop up batteries in salt…
Move to live: how Move to Be wants to get the country…