Have you always wanted to live in your own wee mobile home in the countryside, in the desert or in the forest? In that case, the Latvians from the start-up Brettle Haus think in exactly the same way as you do. They have developed a kind of wooden LEGO house that can be put on a truck and then be connected up within three hours, including the electricity and sanitary facilities.

Living in a small house is one thing, but living without these two fine features will of course make things a lot more uncomfortable. Tiny Houses may be compact, however, they are usually linked to a location. Campers and trailer tents are nice for holidays, but to live in them permanently is a different matter. These have a modern look and are made entirely of wood. Ideal for those born nomads among us who are predisposed to suffering from homesickness. 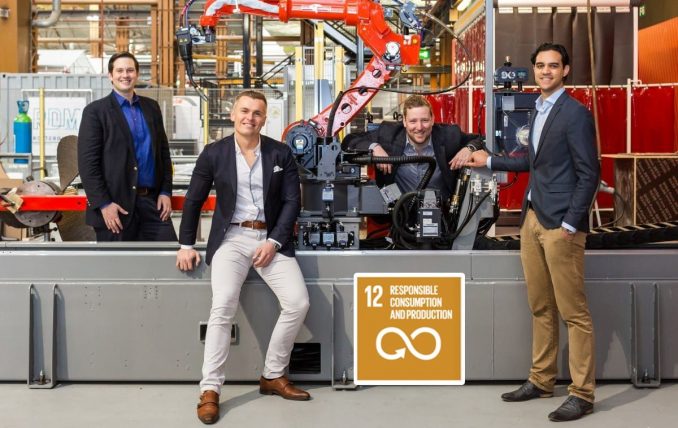 Cars have been assembled by robotic arms for decades because this is a lot faster and more efficient than if left to human hands. Why are things like smartphones, clothing and nice stuff from retail stores for the living room still made under appalling conditions in low-wage countries? That’s because as yet, robotics and AI aren’t nearly as good at everything as human beings are.

One thing that manufacturing robots lack are fine motor skills; in other words, the current generation is far too clumsy to manufacture delicate smartphones with nano-technology where each nanometer counts. IMSystems from Delft wants to kick off a revolution with their ultramodern transmissions so that in the future robotic arms are able to do their work with surgical precision. Traditional sprockets have to make way for cooperative cylinders, which means that the characteristic wooden robotic movement will eventually be a thing of the past.

MX3D – The bridge to 3D-printed bridges

3D-printers have become better and better over the past decade. More and more companies are recognizing the potential of this technology which is still in its infancy. Consumer electronics components, architectural scale models and medical prosthetics are now increasingly being produced by 3D printers.

Nevertheless, all this could be done on a much, much larger scale. As last year, right here in Amsterdam, the very first bridge was built entirely by a 3D printer. Although the potential of this technology is endless in principle, such machines are often limited by their size. This is a problem for large buildings such as bridges and the visual arts.

Basically, with a small unit you can make each part separately. But then you yourself may as well use a welding machine or hobby glue. The Dutch start-up MX3D likes to think big and has developed a 3D printer meant for really big ideas!

You see the articles pass by often enough; a revolutionary medicine has been developed against nasty disease X, probably on the market by the autumn of 2025. So, how come this takes so long? For safety reasons, of course.  You must be sure that it has no dangerous side effects. That is why medicines first undergo a long process of clinical testing before they are allowed to be applied to patients. In fact, this is quite a logical process.

However, there is no such thing as a universal language or database where all clinical tests are able to be compared using a standard measuring system. As a result, researchers and physicians themselves have to link the data from many different systems to each other which entails quite a considerable amount of administration. This could be a lot simpler, says Climedo a German start-up who want to make the bureaucracy associated with clinical research obsolete with their smart software. The clinical phase for groundbreaking medication could be reduced by years, which would enable us all to stay healthier for much longer. 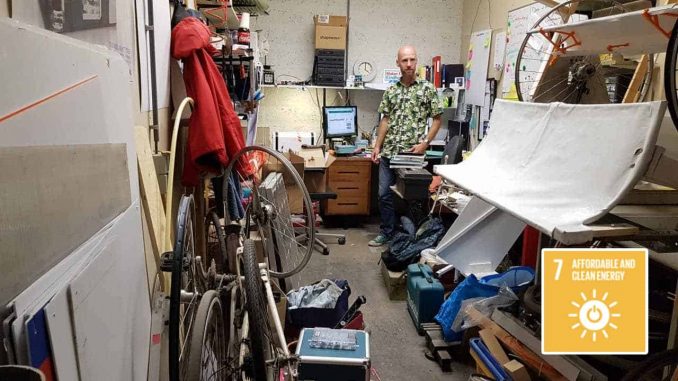 The so-called “Urban Turbine” from the start-up R-Energy is designed to make wind energy cost-effective, even with smaller formats. Windmills are typically not known for their compact size and Hans Vullers from Eindhoven was keen to change this.

In many small wind turbines, the energy yield is too low to be taken seriously. Vullers’ so-called ‘urban turbine’ is specially designed for cities; its machinery can convert even the slightest gusts of wind into electricity. Nevertheless, there is occasionally no wind at all even in the Netherlands. Fortunately, this turbine also has the ability to store energy from sunlight.

Whereas a start-up typically involves hi-tech laboratories and advanced materials, this Eindhoven-er uses discarded items from other people, such as bicycle wheels, discarded metal or wood waste, in order to create his sustainable structures. How more ecologically responsible would you like it to be? Utilizing other people’s junk to generate sustainable energy. This consistent philosophy and the very individual approach have convinced IO to reward R-Energy with the title of Start-up of the Week!

'The best scientists also have start-ups'
Within five years, Tarucca wants to monitor all wind…
The Space Week shows the social importance of space for…
Episode 8 - Do Dordrecht, Apeldoorn and Alkmaar keep cool in…
Students compete to really make a difference with their…
Big ambitions for imec.istart.nl, after a year of the…
Manage Cookie Consent
We use cookies to optimize our website and our service. Help us to make our site better by accepting all cookies.
Manage options Manage services Manage vendors Read more about these purposes
View preferences
{title} {title} {title}