An app that makes young people handle money better, Studio Tast pitched the idea during the What if Lab: ‘local government meets design’ DemoDay. Together with youth worker and owner of the record label 040records, Shaun Figaroa, the design studio is working on a campaign, an app and workshops, to tackle this problem. Mitchel Jacobs of Studio Tast and Shaun Figaroa tell about their cooperation, the problem and the solution they’re developing for it.

The App
The app Stack your Money is going to use the API’s of banks. They will be open from January 1st, 2018, whereby a pattern of spending can be visualized in the app. The users can then directly see how much they’re spending on, for example, clothes. In addition, the app will have the ‘Gamechanger’, with this, users can see what happens if they adjust their pattern of spending. You can set goals, for example, the vacation that you have to pay for in August. If you’ve entered a dream, you can see how much you have to save each month to reach that goal. “That’s the goal of the app, getting insight into your situation without consequences and see how you can change it”, says Jacobs. 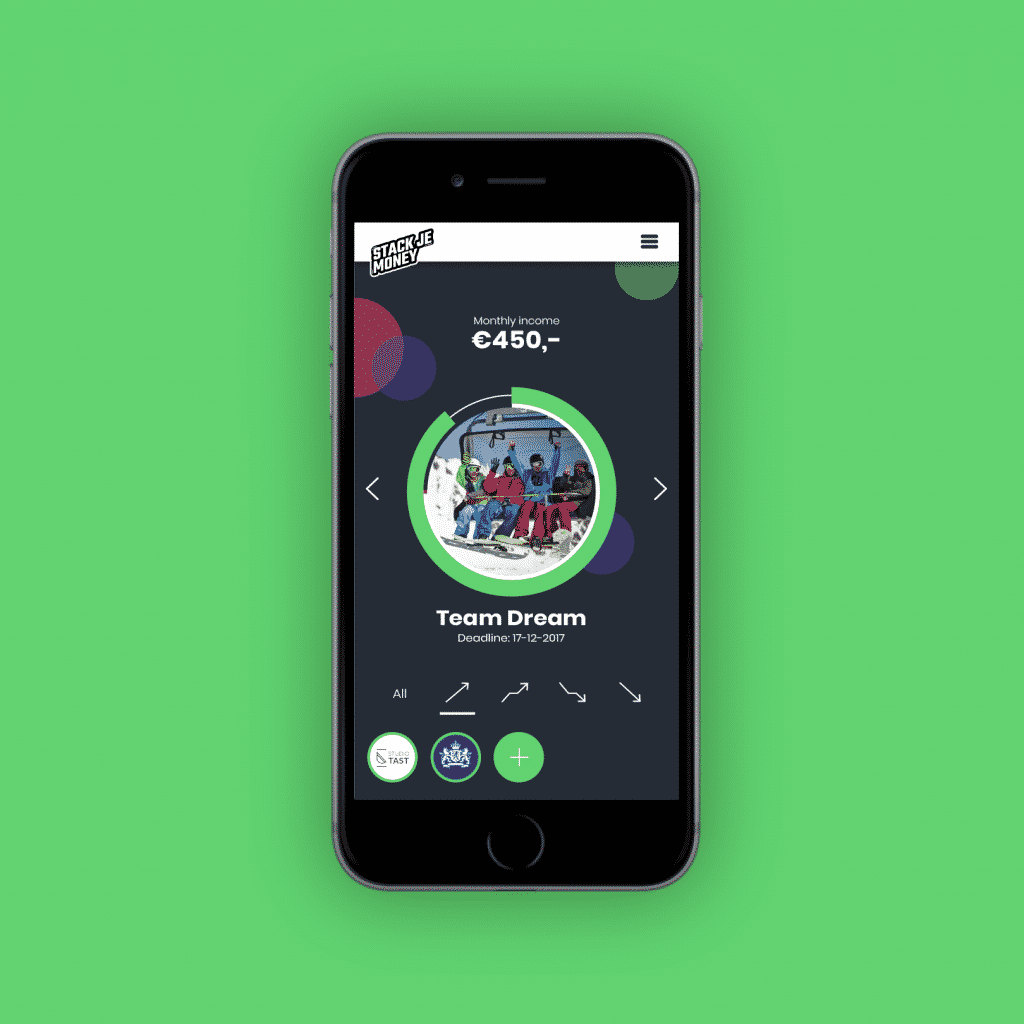 Figaroa adds: “We really want to make the dreams concrete. If you want to go on holiday, you’re going to start saving up. If you save less this month, you think: ‘I’ll just do that next month’. But if you concretely see how much you have to save and you have the goal in mind, you can really do something about it. For young people, it is hard to make things concrete. To me, the beauty of this project is that you can do this without being preachy. In the app, you hopefully won’t find anything about debts, but what you will find is: what is money? How do you handle it? What are the consequences? Not saying what is good or bad, but showing what happens. You have to show the youth what is possible. That is one of the strengths of the app, inspiring and showing what you can do with money.”
To further stimulate the youth to do something with their finances, there will also be information in the app. By telling stories in videos that connect with young people’s experience, Stack your Money wants to show what you can do with money and why you would save up.

We noticed that a lot of young people couldn’t handle money well, also in our environment. Among our friends, there was a taboo on money and debt. You didn’t have conversations about that, even though it has a lot of impact on your social life.Shaun Figaroa, Youth coach Lumens & owner recordlabel 040records

A taboo on debt
Besides an app, a campaign and workshops will also be linked to Stack your Money. To make sure this reaches young people, Figaroa is going to use the network of vloggers and rappers which he has built up. This way, Stack your Money wants to reach the youth and be more than just an app. Figaroa tells about how the project came about: “I’ve already been involved in youth work for some time. In the municipality of Best, a jar of money became available in 2015 to educate schools about depth. They wanted to handle that in some way. I then started brainstorming with someone of my record label and made a first concept of something that eventually became stack your money. We noticed that a lot of young people couldn’t handle money well, also in our environment. Among our friends, there was a taboo on money and debt. You didn’t have conversations about that, even though it has a lot of impact on your social life. With the municipality of Best and the Rabobank, we have done a pilot. We have followed the pattern of spending of fifteen young people and tried to adjust this through workshops. It was successful. What inspires me the most is that we’re actually serving a societal goal. For me, it’s not something we want to become rich with, even though it does have the potential to become really big and reach a lot of young people.”

Gaining insight into your financial situation
With the idea to further develop this, Figaroa ended up at the What if Lab, where Studio Tast got to work with it. Jacobs: “When the project first came to us, we started looking at what exactly the question was and which research had already taken place. We always try to find the question behind the question: What is the purpose of money and what is money anyway? What do young people want to do with money? In the short term, they just want to have fun and in the long term, they want to realise certain goals and dreams. How can you bring those two together? You don’t want to live in poverty now so that you can buy a car later on. So it is about being able to reach dreams in a pleasant way. You can motivate quite some people to get insight into their financial situation through design and interaction, that’s the fun thing about this project.” 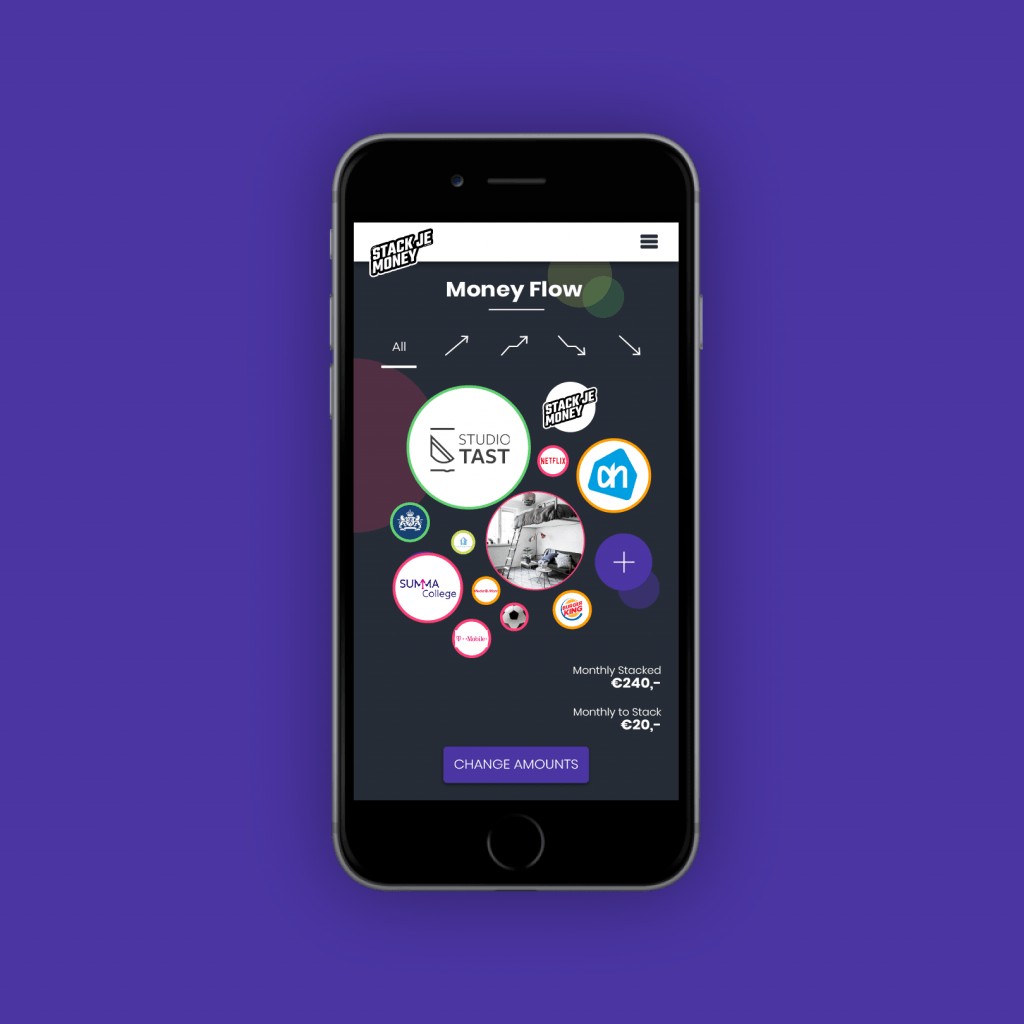 Your spending pattern made visual in the app

Dutch Design Week
Stack your Money will show a web app during the Dutch Design Week, to give a first impression of the eventual app. There is now still being looked for cooperation with banks and municipalities. In addition, funding is needed to develop the app and the campaign. If this has all been done, the app will be launched and the campaign will be started mid-2018.