She would prefer to have all roofs decked out with solar panels. In any case, the aim is to have at least 1 in 4 households covered. Roebyem Anders (51), founder of Sungevity and BNR entrepreneur of the year 2019, does not want to stop before that happens. One thing is for sure, thinking on a grand scale is not strange to her. But things shouldn’t just end with major plans. Zonline, the company that she first set up back in 2012 and which has since merged with the American company Sungevity in 2014, currently boasts around 20,000 customers. Anders likes to think big and wants to make a real impact.

Roebyem Anders looks back on an impressive career working with not the most minor of organizations. Like the World Bank and the International Energy Agency (IEA). An idealist at heart who has made a name for herself in sustainable energy. But instead of dreaming about a nicer world, she wants to make her own contribution to it. And as soon as she can, if you don’t mind. This is why Anders gets so annoyed every time she takes the train and passes all those business parks with bare rooftops. “Why aren’t they full of solar panels yet?” she then thinks. 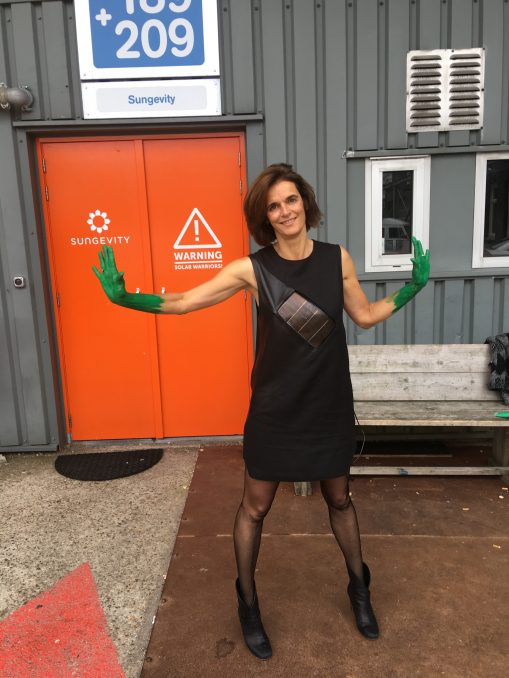 Solar panels for everyone

After seven years of employment with BP under a visionary leader who was committed to the transition from fossil fuels to renewable energy, she felt it was time to start her own company.

Anders: “I wanted to make solar panels affordable and easily accessible to everyone. But the price of solar panels was still sky-high at the time. That’s why we had to come up with some clever ideas.”

At Sungevity (acquired by Engie in 2017) Anders set to work with plenty of zeal on what she christened the ‘Schooldak Revolutie‘ (Rooftop Revolution). Among other things, a project was started specifically aimed at equipping all school roofs with solar panels under the motto of: ‘Do you want it clean and cheap? Or would you prefer it dear and dirty? Then the answer is pretty simple, don’t you think?’

She also unleashed the ‘Bajes Revolutie‘ (prison revolution) whereby all Dutch prisons would be equipped with solar panels as soon as possible. According to Anders’ own words, this was down to the dynamic female director of the umbrella organization who set things in motion very quickly.

What is so innovative about any of that? Anders: “We were pretty much the first solar panel provider with an online concept. That was still uncharted territory around 8-9 years ago. At that time, the solar panel market still had a rather staid image of three mechanics who dropped by to measure everything and who then figured out what you needed on your behalf.”

“We didn’t send mechanics around, but instead developed an online tool that enabled our potential customers to calculate not only what they would spend on panels, but also what they would get out of them. They could also use it to compare various installation plan options. Above all, what was unique about our concept, was that at the very minimum, our customers were guaranteed that they would always have a return on the amount of generated power that had been estimated in advance.”

Woman in a male-dominated world

Anders recently ended up alongside Fairphone’s new CEO, Eva Gouwens, and founder/CEO Jaap Korteweg from the Vegetarisch Slager (Vegetarian Butcher) in the Dutch BNR’s Entrepreneur of the Year 2019 Top 3. How extraordinary is that for a woman entrepreneur, who, moreover, operates in a field, namely the energy sector, which is predominantly made up of men?

“It’s quite true that I’m almost always the only woman present. But I am also on the cutting edge as far as entrepreneurship is concerned. I’m a social entrepreneur, but I am also active in the energy world.”

“And when I come to these kinds of events where there are just a bunch of men in the room, I sometimes think: ‘Guys, it’s 2020, isn’t it? Where are all the women exactly?”

“Social entrepreneurship is a women’s domain at the moment, but the energy sector isn’t like that whatsoever.”

There are a few women among the grid managers, and there are smaller start-ups with women CEOs, but larger companies with a female founder/owner and/or CEO are few and far between. Why is that?

“No idea. Maybe women don’t dare to take as many risks. Or perhaps they feel more at home in smaller companies.”

What makes Roebyem Anders such a great entrepreneur?

“I think you should at least have at least a few things figured out. For one thing, you can’t do everything on your own. Even if it’s just because you can’t be good at everything yourself. It’s not just about delegating and letting things go, but more importantly about realizing what you can and can’t do well on your own. You need to know where your own strengths lie and focus on that. I am the founder of Sungevity, but in practice, I actually turned out to be totally unsuitable as the CEO. I quickly found a very good one, Jan Slaghekke. If I had to give myself a job title, it would be something like ‘chief mission officer.'”

The corona crisis has dealt a fatal blow to many companies. Or in any event, they’re finding themselves in dire straits. How is Sungevity faring in this respect?

“Of course, we’re also suffering as a result of the crisis. Everyone has been caught out by it. Our orders have also fallen by 20%. Nevertheless, we are not affected by it too much. Not just because we have a product that is reasonably crisis-proof – after all, the energy transition is still going on – but above all because we were already operating online before the crisis hit. What’s more, we were able to adapt very quickly. That’s what makes you an entrepreneur, after all. So, very early on we set out a corona protocol for our installers so that they know exactly how they should approach customers.

By the way, housing corporations are doing well. They, too, need to become more sustainable. It was mainly the private sector that gave us cause for concern. Since consumers were also hit by the crisis, that obviously fills them with a sense of uncertainty. Which means you’re not so quick to invest in something new. On the other hand, people want to spend their time in a useful way. Plus, they also appreciate that by buying solar panels, they can also save on their energy bills.

Everything at the Gamma local hardware store

Recently Sungevity has formed a partnership with the Gamma building hardware concern Gamma, which will later be followed by one with Karwei (another construction hardware chain). Was this a case of divine intervention? Seeing that this is one of the few sectors that was allowed to remain open during the lockdown …

Anders: “This partnership was, of course, already in the works for quite a while, but has turned out to be just a matter of good timing where the crisis is concerned. However, ultimately the main thing is that we’ll help as many people as possible to get solar panels. That’s what it was all about for me to start with.”

“I think that what with the early adopters, we are now also reaching a group of people that we hadn’t reached before through this campaign: those masses who shop at the Gamma hardware store. If we want to be able to tap into the second million following the first million solar panel owners, we also have to reach this group. We’ve also devised a financial arrangement plan aimed specifically at them, under which they can take out a loan on very favorable terms. Something that we could not have foreseen at all before the crisis. Yet it is precisely this arrangement that appears to be doing very well in the current crisis period.”

Instant plug-in solar panels as a solution to high energy…
Why glass is so difficult to imitate for solar panels
After Russia now China: Europe wants its own solar panel…
Agricultural sector and hydrogen: a promising yet uncertain…
Solar panels help to reduce historic buildings' emissions…
Energy efficiency and green mobility are central to Czech…