The NS and the Dutch Design Foundation have again organized the What if Lab: NS this year. Designers could participate to find solutions to improve the travel experience. The design studio Waarmakers is one of the winners and is now working on an app, together with the NS, with which you can play a quiz on the train on certain routes. Maarten Heijltjes talks about the app.

A unique environment
“The public transport is becoming more and more crowded, you share a small space with a lot of people. Our idea was to see how we can use the diversity of all the people on the train as a positive thing. It is a complex environment you’re in. You’re in a compartment which is constantly moving. In addition, you have to take into account that there are many different people that want to spend their time there in different ways. You want to do something fun, but don’t disturb the trip of others. That is the unique thing about being on a train, you’re in a compartment that is only at the same place for one moment. You can also do a quiz at home, but a quiz related to a direction, speed, location and the fellow traveler, can only be played at that moment.”

On the basis of all that we design is the question: ‘What does it give you in a broader context?’Maarten Heijltjes, Waarmakers

The app
“We have made a game that consists of a number of challenges, especially for one route, with which you can play realtime with and against your fellow traveler. They aren’t only knowledge questions, there are also different types of challenges that we want people to complete in a playful way on the track. An example of such a question is: ‘In ten seconds, you’re passing a church tower, is it on the left or on the right side  of the railway?’ That makes sure you really have to look outside and start looking. That way we try to involve the environment in the type of questions we ask. On the basis of all we design is the question: ‘What does it give you in a broader context?’ In that case, the idea behind it is that you don’t want someone to be completely absorbed in his phone, without him or her noticing that you’re traveling through a fantastic landscape.” 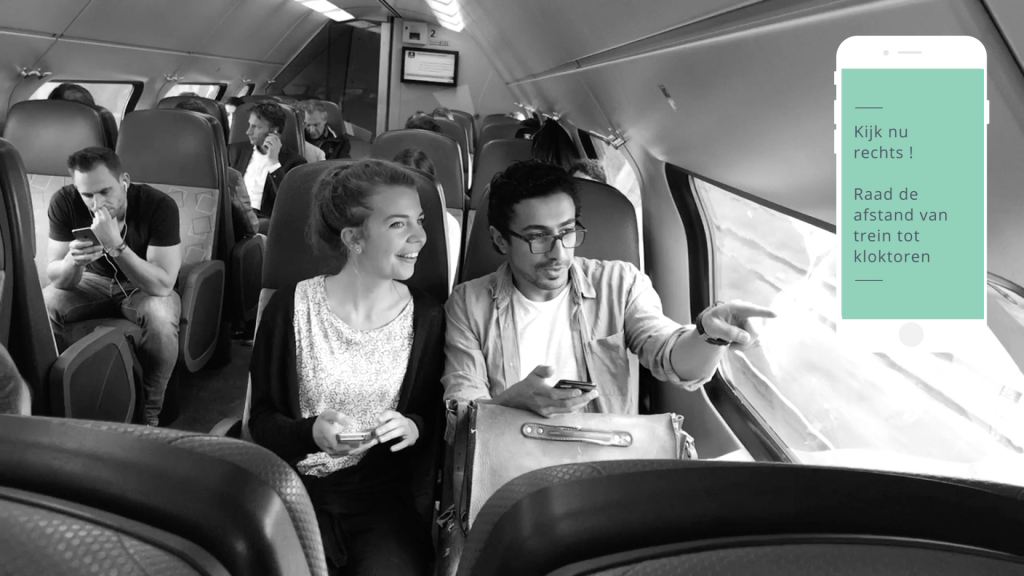 Dutch Design Week
“We want to play the game during the DDW and do the first test in the compartment. We will be on the train to explain some things and divide people into teams. The Dutch Design Week is a fun moment to try new things. Then we can really look at how people react to this. The intention is to take the first step towards a to be further developed app, not only to do something fun during the DDW.
The first version of the app will be working on the track between Amsterdam-Amstel and Eindhoven. After that, we will expand it to several tracks. You get other questions between Den Bosch and Eindhoven than you do between Amsterdam and Rotterdam.”

What if Lab
“What if Lab: NS is incredibly fun for us. The NS is such a big party, you can’t just get in there as a design agency. You don’t just go pitching for the NS. It’s amazing to be able to show, as a design agency, how we look at certain things and to show creativity. It is a very interesting test balloon, for which the NS provides a unique platform, in range and diversity.”