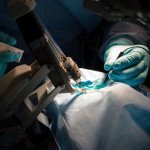 Initiated by E52 and High Tech Campus, the 10 most promising startups-to-watch from the Brainport Eindhoven region have been announced for the fourth consecutive year.  On July 12th they received a Gerard & Anton Award. The winning companies are highlighted one by one in an interview. Today part 7; read the whole series here.

Preceyes develops and sells surgery robots that enable eye surgeons to perform complex surgery and treatments on the retina. The surgeon controls a robot-assisted operating arm with a type of joystick. The device translates small movements of the surgeon to even smaller movements. The device is capable of inserting a needle into the retina to less than a twentieth millimeter. Any vibrations of the hands are filtered by the device. Last September, the first operation took place, since then there have been eight operations. Perry van Rijsingen about the patience of the medical startup.

General
Preceyes originated thanks to eye surgeon professor Marc de Smet over ten years ago. At that time de Smet worked in the AMC. He saw that eye surgeries on the retina were becoming more and more complex and they became harder to perform. With the new techniques entering the market, it became possible to develop an assisting surgery robot according to him. He came to Professor Maarten Steinbuch at the TU/e. Several students and Ph.D. students researched the feasibility of the system here. In 2015, Preceyes became an independent company, and it has sold two systems since.  The company expects the sales to increase in the next year. There are five people working for the team, including de Smet who is still involved from Lausanne, where he has a practice.

Why are you doing this?
“I have already done a lot in the medical startup world, the way of life attracts me. I’m here again working on the front line of a medical breakthrough. With our system, we can have a direct impact on the quality of life of people. But we also extend the careers of surgeons. Before surgeons can operate on the eyes, they have already had a long training, but in order to operate on the retina, they need an additional training of five years. Surgeons learn to do the exact same things with their left hand as with their right hand. That is incredibly difficult. The treatments they perform are so complex that the smallest vibration can already cause complications, you only have this hand steadiness for a number of years. Preceyes can give support there.”

“Imagine what it means to become blind due to a retinal disorder. There has been research after the quality of life and people losing their sight at a later age experience it as something worse than being manic depressed or even find it worse than treatments for certain types of cancer. There is also a big financial impact. Patients are usually no longer capable of working. All sorts of things need to be adjusted at home, sometimes special transport is needed. All this costs money, families are under financial pressure, but also governments and insurers have to bear a large part of the costs. Research shows that blindness caused by retinal disease involves more than 400 billion euros a year and that’s just in the Western world. Only a relatively small part of this, 7 billion euros, goes to surgery. If this amount increases for new and improved therapies, that huge expense of more than 400 billion euros can be greatly reduced. This strongly improves the quality of life and then we can offer better care at lower costs. That’s our goal.”

“When you see the face of Priest Bill Beaver when he gets his sight back. That grin on his face, fantastic. This is what you do it for. That is also the beauty of a medical product, we really contribute a lot to the quality of life.”Perry van Rijsingen, About the first successful surgery, BBC made an item about this.

At what moment did you think: “I’m quitting’?
“Before starting this, you know that you have to have a lot of patience. Bringing a medical device to the market takes years. It is an intensive and lengthy process, I never had illusions in this. That is why there hasn’t been a single moment where I hesitated to quit. In addition, I have only been active for fourteen months, whereas the rest of the team has been working on the Preceyes system for almost a decade, so it’s a little early to quit already, isn’t it?”

“But you must have a lot of perseverance, patience is important. Whether I’m frustrated sometimes about the testing phase taking so long? You could see it that way, but you can also see it as an advantage. Every component and every process is extensively tested and reviewed. If you pass all these strict medical tests, you have a reliable product that is extremely accurate and offers 100% safety. So for the competition, it won’t be easy to reach the same level.”

What makes you lyrical?
“The moment of the first surgery, end of August last year in Oxford, that was a highlight of course. Not just the fact that the surgery took place. But everything around it. The BBC made an item about this, if you see the face of the operated man, Priest Bill Beaver, when he gets his sight back. That grin on his face, fantastic. This is what you do it for. That is also the beauty of a medical product, we really contribute a lot to the quality of life.”

“In the coming years, more and more new treatments for serious retinal problems will come on the market: cell therapy, gene therapy, newer medications and other forms of surgery. These treatments can be performed with the system of Preceyes. There is currently only a handful of surgeons in the world who can perform these new methods, if they even dare. Because one minor mistake can mean that the patient becomes blind forever. With Preceyes, the drug delivery goes more accurately and safely, no matter how skilled the surgeon is. Because of this precision and safety, it also becomes possible to perform operations in the future that are now not possible yet.”

What can we expect from you the next twelve months?
“That depends a bit on how fast the funding comes about. But that doesn’t mean that we’re waiting until the deal is done, you can imagine that there’s plenty to do. The Eye hospital in Rotterdam has purchased our Robot, we are going to research together what’s the best way for doctors to use the assisting robot. The intention is to start surgery on the first patients in early 2018. It will be a multi-year research and all results will be used to develop the next generation of robots.”

“We have interests from countries like India and China, those are growth markets because people with a retinal problem often don’t undergo surgery because there are still too few surgeons who can perform this complex retinal surgery. With an assisting robot, you can solve that problem. But a lot of progress can also be made in the western world. No matter how skilled the surgeons are, it becomes safer and more accurate with a robot. So we also keep focussing on the western market. In addition, in the long run, we will start focussing on improving other operations on the eye. Think about cataract surgery and corneal surgery, for example.”

'Quit your job for one day a week'
The healing qualities of a lightning bolt
Make your own mobile robots with building blocks from Avular
'Why make things complicated when they can be simpler?'
Eindhoven soccer and service robots clinch world titles…
MachyTech enables humans and robots to work safely together